In the present day, an adult Jake Doyle tells his adolescent cell phone obsessed daughter Annie a story about his ten-year-old self in 1988. Back then, a young Jake Doyle and his friends were obsessed with the newest game system around, a Nintendo Entertainment System. Jake desperately tries to get one for Christmas and sets out on a series of misadventures with his friends. However, with his parents convinced that all games systems are bad for children’s brains, what hope does Jake have for receiving the Christmas gift of his dreams? 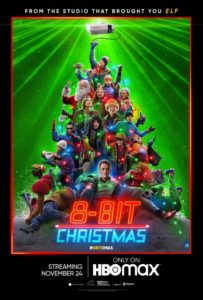 In present day, Jake Doyle (Neil Patrick Harris) debates his young daughter, Annie (Sophia Reid-Gantzert), about the dangers of being obsessed with technology. Annie wants the latest cell phone for Christmas, something Jake is hesitant to get her. He tells his daughter a story from his childhood in the late 1980s when Jake got his first Nintendo Entertainment System (NES). The movie then toggles back and forth between older Jake and young Jake (Winslow Fegley).

In 1988, Jake is obsessed with obtaining a game console for Christmas. Jake is introduced to the NES by the local neighborhood rich kid, Timothy Keane (Chandler Dean), who uses his game system to keep himself at the top of the junior high social chain. Timothy is the only kid in the neighborhood with the NES and its various accessories. Every day, Jake and his friends gather with the rest of the kids from school outside of Timmy’s house in the hopes that Timmy will choose them as one of the ten kids to play in his basement that day. Timmy even acquires the NES Power Glove at one point, but soon learns that the accessory does not work right.

Jake and his friends get tired of living off Timmy’s whims. Jake approaches his parents about acquiring one for Christmas, but John and Kathy Doyle (Steven Zahn and June Diane Raphael) inform them that they will not purchase him a game system since they believe that it is bad for his brain. Jake’s parents encourage Jake to play outside more. Jake becomes even more obsessed with acquiring a game system after Timmy angrily destroys his television due to his frustration with the Power Glove. The destroyed television seriously injures his family’s dog, which causes Timmy’s parents to agree that video games are bad for children.

It was the most beautiful piece of machinery I’d ever laid eyes on. The thing made Luke Skywalker’s robot hand look like a Tinker toy. Jake Doyle (Neil Patrick Harris)

Not long after, Jake and his friends hear about a contest in the Scouts where the first prize is a NES game system. The contest requires the participants to sell Christmas wreaths. Jake and his friends compete to sell the most wreaths and win the contest. Throughout the holiday season, Jake suffers several humiliations such as being made to wear girl snow boots by his mother, being forced to shovel frozen dog poop by his father, and family shopping trips to the mall.

Jake coordinates with his sister, Lizzy (Bellaluna Resnick), to influence their parents’ purchases for them for Christmas. Lizzy wants a Cabbage Patch Kid doll, and Jakes agrees to drop hints on her behalf if she does the same for him concerning the NES. One night, Jake accompanies his father to a back-alley deal to buy a sold-out Cabbage Patch from a sketchy underground dealer (David Cross). Jake also receives tips on selling wreaths in the old folk’s home which pushes him near the top of the contest.

Jake wins the wreath sales contest, but the first prize is altered after Timmy’s father (Tom Rooney) convinces the community to ban video games. Jake and his friends take matters into their own hands and begin pooling their money together to acquire a NES system. They all agree to share the game system with each other. However, the kids need a ride to the mall to get a NES. They come up with a plan for Jake to sneak away from a school field trip to make the buy. Jake avoids protesting parents and gets into the store to buy the system. However, Jake trips and drops the game system into the street while he is running to get back on the school bus. The game system is destroyed by a passing vehcile, and Jake misses the bus. The back-alley toy dealer sees the incident and places Jake into a cab so that he can catch up with his class. The dealer advises Jake to focus less on the presents and more on the season of giving.

Christmas Day finally arrives, and Jakes does not receive a game system. Instead, Jake’s father, a do-it-yourself guy, surprises Jake with an elaborate backyard tree fort he made for Jake and Lizzy. The fort has lights, ladders, and a trap door. A young Jake realizes that the tree fort and his father’s love for him was a far better gift. An adult Jake reveals to his daughter that he never received a NES for Christmas. Adult Jake tells his daughter that he eventually bought his own NES after working all summer to earn one.

Back in the present on Christmas Day, an adult Jake, Annie, and Jake’s wife go to Jake’s parent’s house for Christmas dinner. Jake shows Annie the tree fort which remains standing. He reminisces about all his good memories playing in the fort, and the adventures he had because of his father’s unexpected gift. During dinner, Jake looks nostalgically at his father’s empty chair as his father died years before.