In A Boy And His Dog, World War IV has ravaged Earth. Its survivors must battle for food, shelter, and companionship in a post-atomic wasteland. A young man named Vic and his telepathic dog, Blood, struggle through this barren wilderness. In the midst of their meager existence, foraging for scraps of food and battling ruthless gangs, the two encounter a young woman who lures them into a surreal city deep beneath the earth’s surface. 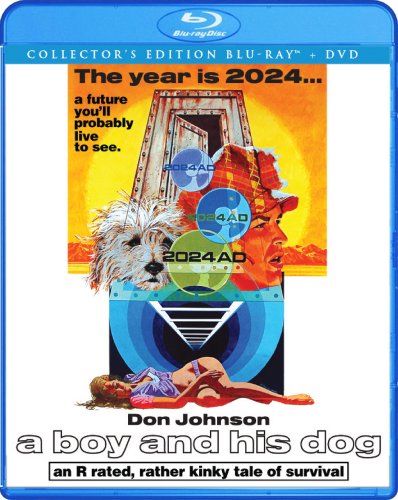 A Boy And His Dog (Collector's Edition) [BluRay/DVD] [Blu-ray]

‘A Boy and His Dog’ Movie Summary 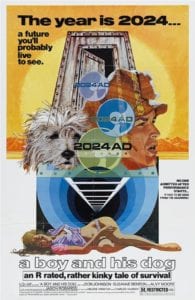 A Boy and His Dog takes place in the distant year of 2024 after World War IV destroyed civilization. Young Vic scavenges for survival in the southwestern United States. Vic’s well-read and telepathic dog, Blood, sniffs out women for Vic to rape in exchange for Vic feeding him. Together, the two eek out a meager existence as thieves in this dystopia. Blood supposedly knows the location of a paradise called ‘Over the Hill’ that’s said to be a utopia on Earth, but Vic believes it to just be a legend. The two continue on in the wasteland.

One day, while looking for food, Blood smells a woman for Vic, but they get there too late. Other men arrived first, mutilated her body, and left her there to die. Vic laments that they wasted a perfectly good woman.

The two then find a bunker where a slave driver forces men to dig for food. Vic steals some of the booty, and runs off to a ‘shantytown’ for the night.

There, Vic and Blood watch terrible stag films in a makeshift, open-air theater. When Blood smells a fresh woman, the two track her to a hidden basketball gymnasium. Quilla June Holmes stands nude, and slowly dresses as if she knows Vic is watching. She comes from the ‘Down Under’; an underground place housing a backwardly-religious society.

Quilla June Holmes then sneaks back to the ‘Down Under’. Vic wants more of her voodoo poonanny, so he sets out to find the ‘Down Under’; against the wishes of Blood. Once they find the entrance to the underground bunker, Blood remains above ground…still weak and bleeding from his fight the previous night.

Down under, the underground city of Topeka thrives…or seemingly survives. It’s a 1950’s style rural community filled with citizens in whiteface; only one ethnicity allowed in this town! The top-three citizens comprise ‘The Committee’ which governs the people in Big Brother fashion and with divine-right authority.

The town quickly captures Vic, as they were expecting him. They put him under the arm of their android/enforcer, Michael. Vic learns he’s been brought there to be the stud of the farm. While he thinks this is great at first, and what rapist wouldn’t; Vic learns that the town will take his seed using electroejaculation and inseminate the ladies artificially.

After impregnating 35 women, the Committee will send Vic to ‘The Farm’; a mysterious place where the Committee sends those who don’t follow their rules or who are of no use to them anymore. There, they murder, kill, and torture the victims, but not necessarily in that order.

The always scheming Quilla June Holmes professes her love for Vic, and she urges him to leave Blood there to die so they can be together. Cut to some hours later where Vic and Blood finish eating bits of Quilla June Holmes’ BBQ body. Blood thanks Vic for the food, and jokes that she didn’t have bad taste after all. The two walk off into the sunset for a happy ending.