In one of the most critically acclaimed adaptations of the classic Charles Dickens’ tale, George C. Scott plays Ebenezer Scrooge, a cold-hearted businessman who hates Christmas and looks down upon anyone who celebrates it. However, when the ghost of his former partner appears to him on Christmas Eve and warns him that he may share his fate of damnation unless he changes his ways, Scrooge begins a magical journey through the past, present, and future that will give the miser a new perspective on life and Christmas. 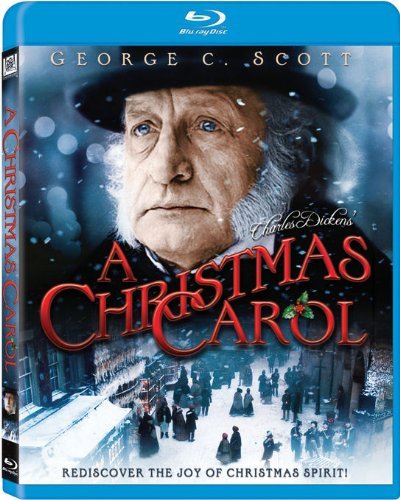 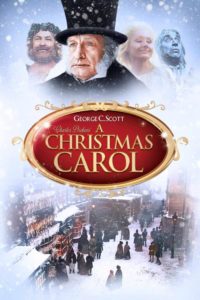 In 1843 London on Christmas Eve, Ebenezer Scrooge (George C. Scott) is a cold-hearted businessman with an incredibly bad temper and tendency to be a skinflint. Scrooge hates Christmas and everything that it stands for and looks down on anyone who celebrates the holiday, including his own nephew Fred Hollywell (Roger Rees). As the film opens, Scrooge rejects his nephew’s invitation to Christmas dinner. Scrooge has a loyal employee by the name of Bob Cratchit (David Warner) who works alongside Scrooge in the freezing counting house. Scrooge reluctantly relents to Cratchit’s request to have the next day, Christmas Day, off from work. As Scrooge leaves work, he mistakes Cratchit’s young son Tiny Tim (Anthony Walters) for a beggar and informs him that he will have to wait a long time in the cold for his father to finish work. Scrooge also lambasts two gentlemen (Michael Gough and John Quarmby) who are collecting money for charity.

Scrooge lives alone with minimal amenities. That night, Scrooge encounters the ghost of his late business partner Jacob Marley (Frank Finlay). Marley warns Scrooge that he needs to repent and except Christmas into his heart or he will be doomed to share his miserable fate in the afterlife. The deceased businessman informs Scrooge that he will be visited by three spirits during the night. However, once Marley leaves, Scrooge convinces himself that he imagined the ghost.

Shortly after midnight, Scrooge is visited by the Spirit of Christmas Past (Angela Pleasence). The Spirit whisks Scrooge to his past and shows the miser a younger version of himself (Mark Stickson) that was placed at boarding school after Scrooge’s father didn’t want the boy due to his mother’s death in childbirth. A visit from Scrooge’s sister Fan (Joanna Whalley) brings a sliver of light into Scrooge’s otherwise dreary existence. The Spirit also shows how Scrooge’s unbreakable focus on accumulating wealth as an adult drove a wedge between him and the woman he loved, Belle (Lucy Gutteridge). Additionally, the Spirit shows Scrooge a now-married Belle with her large, happy family on the Christmas Eve that Marley dies. Finally, the Spirit reminds Scrooge of the death of Fred’s mother, Fan. Scrooge is angered by the visions and extinguishes the spirits with his cap before finding himself back in his empty bed chamber.

Another sound from you… and you’ll keep your Christmas by losing your situation. Ebenezer Scrooge (George C. Scott)

Soon after, Scrooge is visited by the Spirit of Christmas Present (Edward Woodward). The Spirit shows Scrooge how others keep Christmas. The Spirit takes Scrooge to Bob Cratchit’s house, where Scrooge is surprised to find that his clerk has such a large family. Scrooge watches as the Cratchit family celebrates Christmas with a meager meal made up of goose and pudding. Scrooge takes pity on Bob’s ill son Tiny Tim. The Spirit warns Scrooge that unless things change, Tiny Tim will die which troubles Scrooge. The Spirit then takes Scrooge to Fred’s house for the Christmas party that Scrooge declined to attend. Fred explains to the party goers that he pursues a relationship with his miserly uncle for the sake of his late mother, Fan, who Scrooge loved deeply. Scrooge is touched by the sentiment. The Spirit then takes Scrooge to a desolate street where Scrooge witnesses a homeless family with a husband desperate and eager to work, contradicting Scrooge’s early comments about the poor. The Spirit also shows Scrooge two hideous children named Ignorance and Want hidden under his robes and warns Scrooge to beware of them before he disappears.

Finally, Scrooge is confronted with his final apparition, the Spirit of Christmas Yet to Come (Michael Carter) who takes Scrooge into the future. This Spirit shows Scrooge what lies in store the following year. The Spirit shows the Cratchit family in mourning, as Tim has died. Additionally, the Spirit shows that Scrooge’s own death will not be mourned by anyone and is actually celebrated by some. Scrooge is then taken to a cemetery where the Spirit points out Scrooge’s own grave. Overcome with guilt and emotion, Scrooge vows to change his ways and embrace every day as if it was Christmas.

The following day, Scrooge gives Cratchit a raise and becomes like a second father to Tiny Tim, who does not die. A changed man, Scrooge now treats everyone with kindness, generosity, and compassion.