When a brash Navy lawyer teams up with a gung-ho litigator in a politically explosive murder case to defend two Marines accused of killing a fellow soldier, they must confront complex issues of loyalty and honor, including its most sacred code and its most formidable warrior. 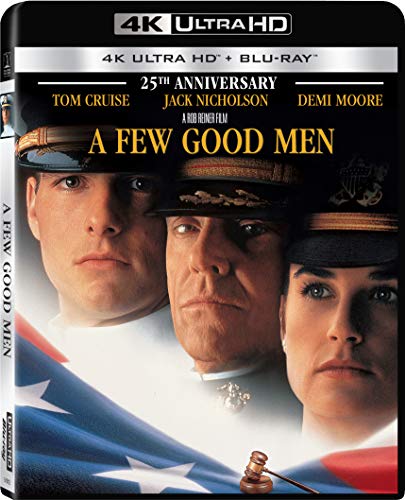 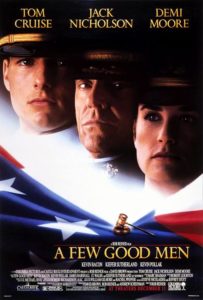 A Few Good Men is the film based on the Broadway play by the same name. In the opening, we see a US marine named Willy Santiago asleep in his bunk when he is rushed by two other marines, Lance Corporal Dawson and PFC Downey, who bind his hands and wrap a rag around Santiago’s mouth. The next day, highly skilled but lazy JAG attorney for the Navy Lt. Kaffee is assigned the case when it is discovered Santiago died from the attack.

Kaffee, who has never been inside a courtroom because he pleads all his cases before trial, immediately tries to plea bargain the case before he even takes a look at the case. Navy Commander Galloway requires Kaffee to read the file, and when Kaffee blows off the meeting, Galloway gets Downey’s aunt to allow her to become Downey’s attorney, requiring a full inquiry and a trial.

When Kaffee and Galloway meet w Downey and Dawson, Kaffee tries to get them to plead guilty to a lesser charge but the Marines refuse since they state they were following orders to give Santiago a “Code Red”, which is military-speak for hazing a weakling into stepping up their efforts. In pre-trial, Kaffee, Galloway and Kaffee’s friend and colleague, Navy Lt. Greenberg, visit Guantanamo Bay, Cuba, to the Marine barracks run by powerful, Colonel Jessup.

The Navy attorneys make a quick rundown of Santiago’s barracks and speak to his unit commanders up to and including combative Marine Lt. Kendrick and Jessup’s second-in-command, Lt. Colonel Markinson. At lunch w the attorneys and the Marines, Kaffee shows a lack of decorum in the presence of the ultra-disciplined Marines. When Kaffee asks about the Code Red, all the Marines state they don’t do that in their unit.

So when Kaffee asks for basic paperwork on Santiago’s request to transfer off the base from Jessup, the egomaniacal colonel demands Kaffee show respect to Jessup by asking in a military manner, thus exposing the attorneys to the formidable character witnesses that will be called later in the trial.

As the trial heats up and Kaffee, Galloway and Weinberg realize all their preparation is being sabotaged by both the accused Marines and the superior officers in the Marines, the Navy attorneys have to learn how to circumvent the highly-militarized and deeply held belief that Marines put the Corps above even God in their system of justice.

So as the trial continues, and Kaffee gets closer and closer to crossing legal and military lines to uncover the truth as star witnesses disappear and others lie to cover up for their fellow Marines in the name of “honor”, when Kaffee calls Jessup for the final courtroom showdown, will we discover the truth behind the death of PFC Santiago? Or will we find out the Corps takes care of its own and we can’t handle the truth? Watch A Few Good Men to find out.