With A Funny Thing Happened on the Way to the Forum, Pseudolus is the laziest slave in Rome, but he still has one wish; that is to purchase his freedom any way he can. After his master and mistress leave for the day to see her mother, Pseudolus finds out that his young master, Hero, is smitten with a girl next door. Her name is Philia. In fact, she’s a young virgin in the house of Marcus Lycus who is a slave dealer specializing in beautiful women. Pseudolus schemes with Hero and Marcus Lycus where he will be freed if he can procure the girl for Hero. Things go south when Hero’s parents return home, and the mighty Captain Miles Gloriosus shows up to claim his bride, Philia. 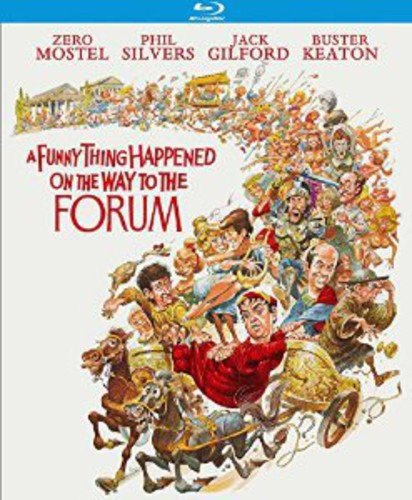 Funny Thing Happened on the Way to the Forum [Blu-ray] 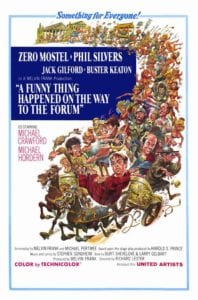 A Funny Thing Happened on the Way to the Forum is a musical/comedy based on three plays of the playwright Plautus that tell the story of a wily slave named Pseudolus who will do anything to win his freedom from slavery, and his young master who has fallen in love with a courtesan that was sold to a famous Roman general.

The film takes place for the most part in front of three homes on a street in Rome- one is the house of Senex, the father of Hero and husband to Domina. Pseudolus is one of their slaves. Their newest neighbor is Lycus, a citizen who runs a brothel filled with beautiful whores. Their other neighbor is the always-absent Erronius – a man on a life long search of his kidnapped son and daughter.

Pseudolus finds out that Hero has fallen in love with a virginal courtesan named Philia. Hero is too young to buy the girl, so the conniving Pseudolus strikes a deal to get Hero the girl in exchange for his freedom.

When Senex and Domina go to visit Domina’s mother in another town, Pseudolus uses that time to buy Philia for Hero, but he finds out that she has been sold to the mighty general Miles Gloriosus who is returning this very day to Rome. To get Philia out of the house of Lycus, Pseudolus makes up a story that Philia has a plague from Crete, and tricks Lycus into letting him take her home next door, so the other courtesans don’t get he plague as well.

Senex returns early from his trip because he has seen Philia next door, and wants to bang her too. She sees Senex arrive, and thinks he is the General who bought her. She demands he take her right then, but before he can, Pseudolus distracts him and sends him over to the empty house of Erronius.

It’s at this time that General Gloriosus arrives in Rome, and demands his bride. Pseudolus stalls him too, but while he is doing so, Domina returns home to keep an eye on Senex, and him away from the courtesans next door. She is surprised to find a famous general being hosted in her home, and runs off to entertain him and the troops.

Pseudolus can only stall the general for so long, and finally he threatens Pseudolus with death if he doesn’t bring him his bride immediately. Instead, Pseudolus decides to fake Philia’s death from the plague. At first the general falls for it, but the lie begins to go awry when Gloriosus demands to see Philia’s dead body. Pseudolus cons Hysterium, Senex’s other slave, into pretending to be Philia, but when Gloriosus tries to build a pyre and burn his dead bride, Hysterium freaks out and runs off. Realizing that he was deceived, Gloriosus demands the house burned and everyone killed.

A huge and wacky chase begins across all of Rome until finally the general catches everyone. He discovers his bride is alive, but before he can marry her and kill Pseudolus, Erronius returns home. He sees that both Gloriosus and Philia are wearing his family’s ring, and that they are in fact his long lost children, which voids the contract the general has with Lycus. (Although in Ancient Rome, I doubt even would even stop him from marrying Philia.) In the end, Hero gets his bride. Gloriosus gets twins to be his brides. Erronius gets a family, and Pseudolus gets his freedom.

Metro-Goldwyn-Mayer Studios Inc. released A Funny Thing Happened on the Way to the Forum on October 16, 1966. Richard Lester directed the film which starred Zero Mostel, Jack Gilford, and Phil Silvers.