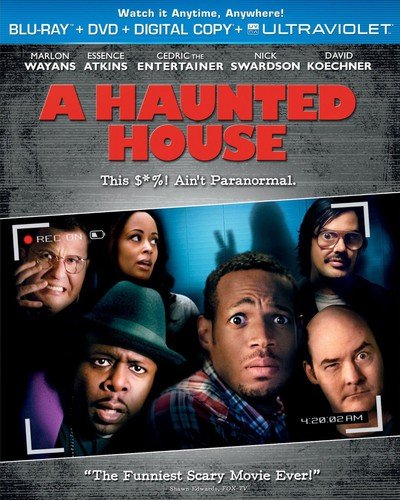 Universal Studios Home Entertainment has announced the Blu-ray/DVD/UltraViolet Combo Pack release of A Haunted House this April. The R-rated comedy stars Marlon Wayans, Nick Swardson, David Koechner, Essence Atkins, Cedric the Entertainer, Bobbie Lee, and Dave Sheridan. The film is directed by Michael Tiddes and is based on a screenplay written by Wayans and Rick Alvarez. A Haunted House will be available online and in stores beginning on April 23, 2013.

From the creators of Scary Movie comes another hilarious horror spoof, a parody of the Paranormal Activity franchise. When newlyweds Malcolm (Wayans) and Kisha (Atkins) move into their dream house, they quickly find they’re not alone. But it’s not the house that’s haunted, but his wife that is possessed with spirits – or as Malcolm calls it – “relationship baggage.” Malcolm hires everyone from a priest to modern day ghost busters to rid her of the demon, determined not to let the evil spirit ruin his marriage… or his sex life for that matter.

A Haunted House was released in January of 2013 and grossed over $39 million at the box office.

The Blu-ray/DVD/UltraViolet Combo Pack will include several special features, including a How To Survive a Paranormal Presence featurette.

Disclaimer: Affiliate links are contained in this post. This means when you click a link, and purchase an item, Movie House Memories will receive an affiliate commission. Advertisers and Affiliate Partnerships do not influence our content. See our Terms of Use about the inclusion of affiliate links on this site for more information.
February 22, 2013
335 1 minute read
Show More
Subscribe
Login
0 Comments
Inline Feedbacks
View all comments
Most Recent Posts
Facebook Twitter LinkedIn Tumblr Pinterest Reddit
Back to top button
Close
wpDiscuz
0
0
Would love your thoughts, please comment.x
()
x
| Reply
Close