Tom McKenna is a well-respected man who leads a quiet, charmed life with his loving wife and family in a small town. But when he kills a robber in self-defense at the diner he runs, Tom is lauded by the national media as a vigilante hero. Unfortunately, the media spotlight also brings him to the attention of some sleazy criminals who recognize Tom as a former associate gone underground. Now, to protect his family from certain peril, Tom must return to his secret past and confront A History of Violence. (Courtesy of Warner Bros. Pictures) 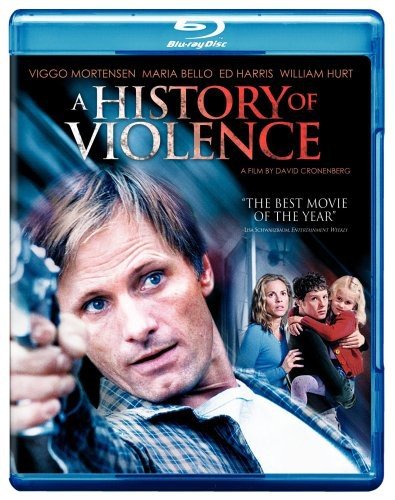 History of Violence, A (BD) [Blu-ray]

‘A History of Violence’ Movie Summary 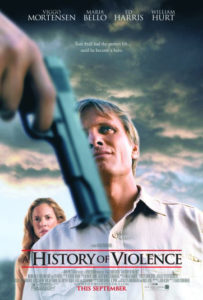 Tom and Edie Stall live in the small town of Millbrook, Indiana. Tom is a mild mannered diner owner. Edie is an attorney. They have two children, Jack and Sarah. The Stall family lives a very happy life in their midwestern home, with little drama to rock their world.

That all changed one evening when two career killers, Leland Jones and Billy Orser, walked into Tom’s diner as he was trying to close up for the day. Leland and Billy try to rob the diner and attack Tom’s waitress, Charlotte, but the seemingly meek Tom Stall gives the town of Millbrook a night to remember. Tom tosses coffee in Leland’s face, grabs a gun Leland dropped on the ground, then shoots and kills Billy. Leland retaliates by stabbing Tom in the foot with a knife, but Tom finishes off Leland by shooting him in the head. Tom Stall is instantaneously a hometown hero and media darling.

Tom’s diner begins to overflow with customers due to his heroic antics and the attention he received from the media. One afternoon, three well dressed men enter Tom’s diner with all of their attention focused on Tom. However, they are actually looking to talk with a man from Philadelphia named “Joey Cusack.” The spokesman of this trio, Carl Fogarty, has a damaged left eye, which has very little usage. Fogarty, along with his colleagues Frank Mulligan and Charlie Roarke, repeatedly harass Tom and Edie, in an attempt to get them to admit that Tom is this “Joey” fella. Edie calls on the sheriff, Sam Carney, to investigate the three men. Sam learns that Carl is deep into organized crime and works for a Philadelphia crime lord named Richie Cusack. Sam proceeds to ask Tom if he is in a witness protection program, which Tom strongly dismisses. This entire day has Edie scared for her family.

Carl Fogarty doesn’t stop at harassing the Stall family on this one day. Carl’s car stalks Tom’s diner, leading him to believe the gangsters will attack his family at their home. Fogarty then follows Edie and Sarah to a shopping mall, where he proceeds to share an enlightening story with Edie. Carl tells the story of Joey Cusack, a man who tried to rip Carl’s left eye out of his head with barbed wire. Carl then tells Edie that her husband Tom is Joey Cusack and that she needs to open up her eyes to who her husband truly is. Edie and Sarah get away from the gangster and Edie immediately files a restraining order against him.

Meanwhile, Tom and Edie’s son, Jack, who is a meek high school student, has troubles of his own with a group of student-athletes who like to bully Jack for no real reason. One afternoon, Bobby Singer, the lead asshole at Jack’s high school, decides to shove Jack through the hallway and challenge him to a fight. Jack, much like his father, breaks free from his mild mannered persona, retaliates, and whips Bobby’s ass in front of their fellow students. When Jack gets home from school, Tom isn’t too pleased with Jack losing his cool. In a smart ass tone, Jack explains to his father that he just defended himself, like Tom had done days before, and Tom loses his composure, slapping his son in the face. Edie gets home to help squash the tension, but tells Tom she is afraid for their lives because Carl is stalking them.

The next day, Carl and his henchmen return to the Stall family home wanting “Joey” and this time they are not playing games. The gangsters kidnapped Jack, then used him as trade bait. The trio allows Jack to go free into the house with his mom and sister, but Tom has to go back to Philadelphia with Carl in exchange. Tom gets closer to Frank and kills the kidnapper with his bare hands. Immediately, Tom grabs Frank’s gun and shoots Charlie dead. However, Tom’s offensive is stymied by Carl, when Carl shoots Tom in retaliation. Carl approaches the wounded Tom and prepares to finish his prey, but is shot dead, from behind, by Jack, who used the family’s double-barreled shotgun.

Tom, again, finds himself in the hospital, this time recovering from gunshot wounds. Edie enters his room and demands “the truth” from her husband. Tom finally confesses that he was a cold blooded killer named “Joey Cusack” and spent three years in hiding, killing “Joey.” Edie is horrified and leaves her husband to recover on his own.

Sheriff Sam runs his thoughts and suspicions about Tom/“Joey” to the Stalls, then asks Tom to tell the truth about his past and the five criminals who were recently killed in his small Indiana town. Edie covers for Tom, saying Tom is who he says he is. Sam is relieved and leaves to go about his evening, but Tom and Edie aren’t finished. The hostile Stalls yell at, slap, choke, and attack each other until they begin having a painful sexual experience in the middle of their hardwood staircase. This angry romp leaves Edie with bruises all over her body and a torn up Tom feeling conflicted.

A short time later, Tom/“Joey” gets a phone call from his estranged brother, Richie Cusack. Tom leaves his family, hops in a pick em up truck, and heads east towards Pennsylvania. Tom gets escorted from one of his old Philadelphia watering holes to Richie’s mansion by Reuben, a Cusack bodyguard. The two brothers reconnect and talk about the Carl Fogarty incident that broke them apart. Richie blames “Joey” for losing millions of dollars, along with an immeasurable amount of trust and respect from other crime families, when he had to clean up “Joey’s” mess. Richie states that his fellow mobsters in Boston would love to take over his territory, expanding their syndicate. “Joey” is taken back by these statements, as he sits in a multimillion dollar mansion. “Joey” asks Richie to let the past be the past and move on, but everything is about the business for Richie. Reuben tries to strangle “Joey” from behind, but “Joey” successfully blocks the attempt and incapacitates Reuben. “Joey” then kills two of Richie’s bodyguards as he escapes from Richie’s office. Richie executes Reuben for screwing up their plan. “Joey” kills off Richie’s last remaining bodyguard, then tricks Richie into going out his front door where he executes his older brother. “Joey” tosses the handgun he used to kill Richie into a lake attached to Richie’s property and begins to clean the blood off of his body.

Tom Stall returns to his home in Indiana, just as Edie, Jack, and Sarah sit down to eat dinner. There are no dinner plates set at the table for Tom, but his loving daughter gets him a plate and Jack offers Tom some meatloaf. Tom and Edie look into each other’s eyes, full of love. The Stall family is back together, ready to deal with the history of violence that has upended their once happy home.

User Rating: Be the first one !
1 week ago
5 minutes read
Show More