Mayhem ensues when the Marx brothers enter the world of opera in their first film for MGM. Otis B. Driftwood is the shifty business manager for widow Mrs. Claypool. When he encourages her to help finance a new opera in New York City, he soon encounters a wild cast of characters working behind the scenes of the opera. At the same time, aspiring tenor Ricardo Baroni is looking for his big break. The love of his life, Rosa Castaldi, has already made it to the big time, but famous tenor Rodolfo Lassparri has his own intentions for Rosa. All stories culminate in a hilarious presentation of the opera Il trovatore at the end of the film. 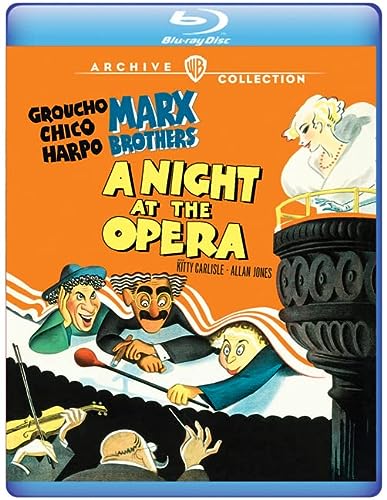 A Night at the Opera (blu-ray)

‘A Night at the Opera’ Movie Summary 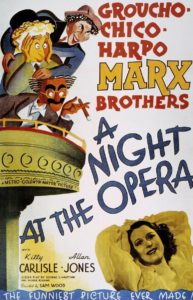 In Milan, Italy, Otis B. Driftwood (Groucho Marx) is a shifty business manager for wealthy widow Mrs. Claypool (Margaret Dumont). After arriving late for his business dinner with Mrs. Claypool, Driftwood tells her that he has arranged for her to become a financial backer for an opera to be produced by the director of the New York Opera Company, Herman Gottlieb (Sig Ruman), who happens to be dining at the same restaurant at Driftwood and Mrs. Claypool. Gottlieb needs Mrs. Claypool’s $200,000 investment to secure the services of renowned singer Rodolfo Lassparri (Walter Woolf King), the “greatest tenor since Caruso”.

Meanwhile, back at the opera house, Ricardo Baroni (Allan Jones), a mere chorister in the opera, hires his shifty best friend Fiorello (Chico Marx) to be his business manager. Ricardo is in love with the opera’s soprano, Rosa Castaldi (Kitty Carlisle), who returns his love. However, Rosa is being actively pursued by Lassparri, who does not think very much of Ricardo. Lassparri has a hapless dresser by the name of Tomasso (Harpo Marx). Driftwood arrives to negotiate the deal for Claypool and Gottlieb with Lassparri and finds the tenor attacking his dresser. Tomasso knocks out Lassparri with a mallet to the head. Driftwood, unaware of Lassparri’s appearance, begins negotiating with Fiorello for the services of the “greatest tenor in the world”. Driftwood mistakenly believes he is signing Lassparri, but instead signs Ricardo to a contract.

Soon after, Gottlieb, Lassparri, Rosa, Mrs. Claypool, and Driftwood all set sail for New York aboard an ocean liner. Ricardo and Rosa say goodbye by serenading each other. However, Ricardo stows away with Fiorello and Tomasso in Driftwood’s steamer trunk. Once in his extraordinarily small cabin, Driftwood discovers the stowaways, but decides to cover for them. Driftwood tries to get them to leave so that he can have a rendezvous with Mrs. Claypool. Driftwood is attempting to woo her for her money. Fiorello refuses to go until they have eaten. Driftwood agrees to order the trio food and calls the steward. Eventually, Driftwood’s stateroom becomes overcrowded with an assortment of people and floods out into the hallway onto the unsuspecting Mrs. Claypool.

Later, Ricardo, Tomasso, and Fiorello perform a couple of songs for the immigrants in steerage. The immigrants are extremely entertained by the act, which draws the attention Lassparri. Lassparri alerts the ship’s captain that the trio are stowaways and they are subsequently thrown in the brig. They escape with the assistance of Driftwood and sneak into the United States by impersonating three famous bearded aviators who are traveling abroad on a promotional tour. During a welcoming ceremony for the aviators, the trio’s true identities are discovered, and they are forced to hide out in Driftwood’s hotel room. A police detective, Sergeant Henderson (Robert Emmett O’Connor), is tasked with arresting them and deporting them. Driftwood helps the trio continuously outsmart the detective. Meanwhile, Mrs. Claypool threatens to cut Driftwood out of the operation if he has anything to do with Ricardo, Tomasso, and Fiorello.

A short time later, Ricardo is reunited with Rosa after he climbs in her hotel room window. Lassparri, who is still pursuing Rosa, discovers Ricardo and the two argue. As a result of the altercation, both Rosa and Driftwood are fired from the opera company by Gottlieb. Ricardo, Rosa, Tomasso, Fiorello, and Driftwood seek their revenge against Lassparri and Gottlieb by sabotaging the opening night performance of Il trovatore. During the performance, they cause constant havoc with the orchestra and sets, and ultimately, they kidnap Lassparri in the middle of the performance. Gottlieb is desperate for a tenor, so he hires Ricardo and Rosa on the spot to replace Lassparri. The remainder of the show goes off without a hitch, and the audience roars its approval for Ricardo and Rosa and boos Lassparri when he retakes the stage. The film ends with Driftwood and Fiorello attempting to negotiate another contract with Gottlieb for Ricardo’s service while Rosa and Ricardo retake the stage for an encore.