If they hear you, they hunt you. In this terrifyingly suspenseful thriller, a family must navigate their lives in silence to avoid mysterious creatures that hunt by sound. Knowing that even the slightest whisper or footstep can bring death, Evelyn and Lee Abbott are determined to find a way to protect their children at all costs while they desperately search for a way to fight back. However, their struggle becomes even more complicated when Evelyn has a baby. 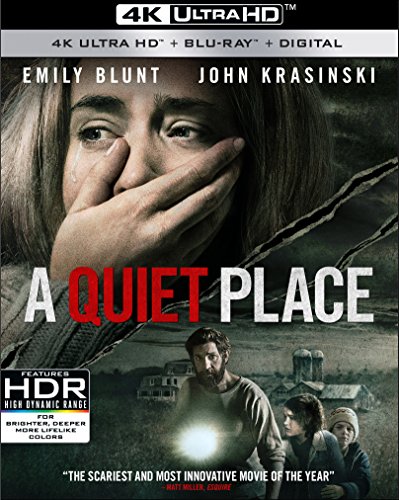 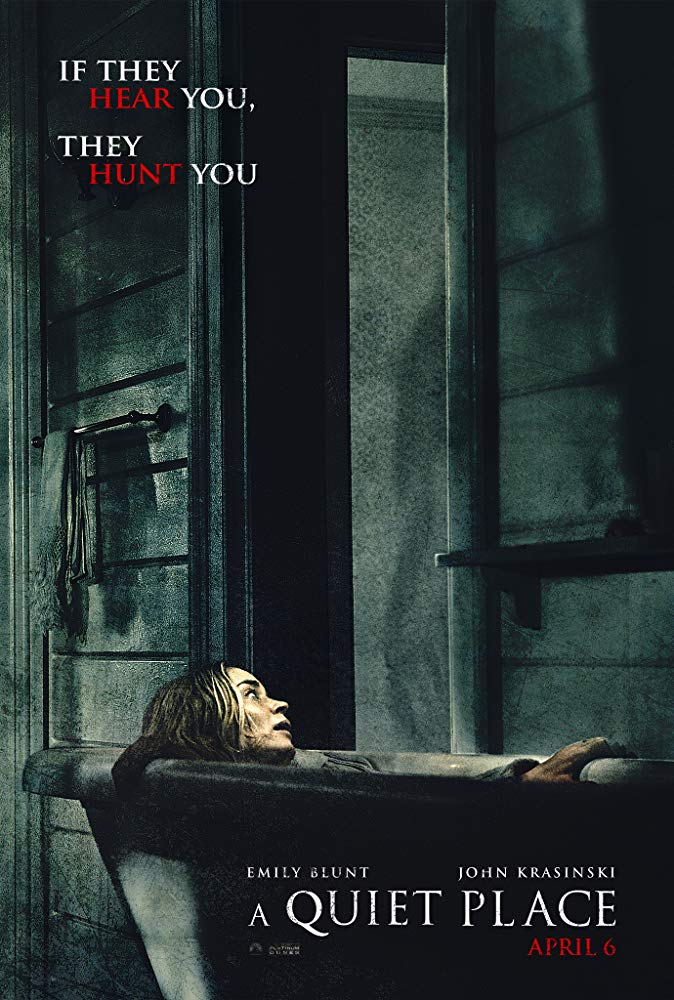 A Quite Place begins with the Abbott family – wife Evelyn (Emily Blunt), husband Lee (John Krasinski), daughter Regan (Millicent Simmonds), and sons Marcus and Beau (Noah Jupe and Cade Woodward) – as they silently scavenge for supplies in a deserted town. The family communicates with American Sign Language to maintain their silence and because Regan is deaf. Four-year-old Beau grabs a battery powered space shuttle toy at a store, but Lee takes it away from him due to the noise it would make. Regan returns the toy to Beau, who then grabs the batteries that his father removed off the store counter. While the family walks in silence to their home, Beau places the batteries back into the toy and turns it on. The toy makes a lot of noise. Lee runs to his son to stop him, but an enormous extraterrestrial creature dashes out of the forest and snatches the boy, killing him.

The film reveals that three months before, the Earth was invaded by the extraterrestrial creatures who are sightless, but possess hypersensitive hearing and nearly indestructible, armored skin. The creatures have wiped out most of the human and animal populations on the planet.

Approximately a year later, Evelyn is pregnant and nearing her due date. Lee maintains the family farm and attempts to make radio contact with anyone in the outside world via Morse Code with no success. Regan is still dealing with her guilt over her brother’s death which has resulted in an emotional wall between her and Lee. Lee works on building a cochlear implant for his daughter, but his efforts have failed which causes further issues between father and daughter.

One day, Lee takes Marcus fishing with him and takes him to a large waterfall. Lee explains to Marcus that loud, continuous noises can drown out smaller noises like speaking voices. Marcus explains to his father that Regan blames herself for Beau’s death and desperately needs Lee to tell her that he loves her. Meanwhile, Regan goes to a makeshift memorial for her deceased brother by herself.

Back at the house, Evelyn goes into labor while she is alone. She goes to the basement and steps on an exposed nail on the stairs, dropping a glass picture frame. The noise alerts a nearby creature who enters the house and begins looking for the source of the noise. Evelyn flips a switch that changes the exterior lights to red, alerting everyone of danger. She goes to an upstairs bathroom and struggles to remain silent during her contractions.

Lee and Marcus return from fishing and see the red lights. Lee instructs a frightened Marcus to set off fireworks to distract the creatures. With the creatures temporarily distracted, Lee collects his wife and his newborn son and hides them in a nearly sound proof room basement in the barn. They place an oxygen mask onto the baby and put the newborn into a sealed box to muffle its cries. Lee goes back outside to find his children. While Lee is gone, Evelyn falls asleep and then awakes to find that the basement is filling with water from a broken pipe. Worse, a creature is in the basement with her and the baby. She is able to collect her son and get out of the basement and goes back to Lee’s radio room in the basement of the home.

Regan returns to the farm and also sees the red lights. She finds her brother, and the two of them climb to the top of the grain silo to light a fire to alert Lee of their whereabouts. Their fire burns out and Lee has not returned. Regan is convinced that her father will not return for her and wants to leave, but Marcus tries to convince her to stay. The hatch door of the silo gives away and Marcus falls into the silo. The silo door falls into grain with Marcus, and Regan jumps into to save her drowning brother. The two children climb onto the door to keep from sinking into the grain. One of the creatures enters the silo and starts to attack the kids, but Regan’s malfunctioning hearing device causes feedback that appears to hurt the creature and Regan. The kids escape from the silo and find their father.

When the trio attempt to get back to the house, they are attacked by a creature. Lee is wounded, and Marcus and Regan hide in an abandoned truck. The creature attacks the truck, attempting to get to the kids. Lee, wounded and bleeding, signs to his daughter that he loves her and always has. Lee then proceeds to yell at the top of his lungs, leading the creature to attack and kill him. Marcus releases the parking brake on the truck allowing it to role to safety. The kids reunite with their mother in the basement of the house.
The creature returns and enters the basement. Regan realizes that the feedback sound made by her hearing device causes the creature to feel pain after seeing some of her father’s notes in his office. She places the earpiece next to a microphone, amplifying the feedback. The creature begins to convulse and exposes the flesh underneath its armored head. Evelyn uses Lee’s shotgun and shoots the creature in its exposed head, killing it.

Evelyn and Regan view two more creatures approaching the house through Lee’s security cameras, drawn by the shotgun blast. Regan looks at her mother, and Evelyn nods at her daughter. Now that they know how to kill the creatures, mother and daughter ready themselves to fight. The film ends with Evelyn racking another shell into the shotgun.