The sequel to the hit suspense film is finally here. Following the death of her husband Lee, Evelyn leads her children in search of other survivors of the alien attack. Her search leads her to the hidden bunker of Emmett, a friend of Lee’s whose family has been killed. When Regan sets out on a personal mission to find survivors, Evelyn has no choice but the trust Emmett to bring back her daughter alive. However, both groups will son find themselves in a fight for survival that impact the future of mankind. 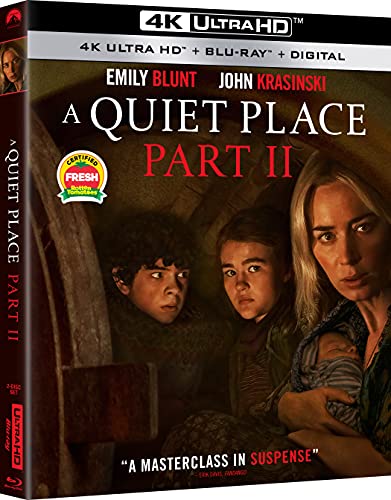 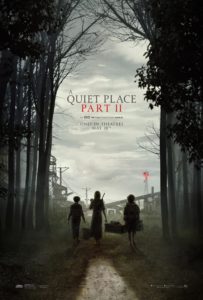 The film begins before the events of the first film. The Abbott family, Lee (John Krasinski), Evelyn (Emily Blunt), Regan (Millicent Simmonds), and Beau (Dean Woodward) attend Marcus Abbott’s (Noah Jupe) baseball game. During the game, a flaming object appears in the sky and crashes into the Earth a short distance away. As people exit the park and attempt to drive away, the town is attacked by hostile alien creatures. The aliens possess armored skin and extraordinary speed and strength. The blind aliens have hypersensitive hearing which allows them to locate and find the hiding town inhabitants. The Abbott family escapes the town and makes it back to their farm.

The film then jumps to immediately following the events of the first film. Lee has sacrificed himself to save his children. However, Evelyn and Regan have discovered that high frequency audio feedback hurts the sensitive hearing aliens. Regan creates a makeshift method of transmitting the noise from her cochlear implant hearing aid through a microphone and speaker, which allows Evelyn to fatally shoot the aliens while they are vulnerable.

With Lee’s death, Evelyn is left to take care of Regan, Marcus, and Evelyn’s newborn son. With their farmhouse destroyed, Evelyn leads her kids in search of other survivors. They bring along Regan’s kit to help fend off the aliens. Once they return to the nearby town, they accidentally set off a sound alarm and Marcus gets his right foot trapped in a bear trap. Marcus’ screams of pain attract a creature. Regan and Marcus use the speaker and shotgun to kill the creature and free Marcus. They run into a nearby abandoned steel foundry to get away from another alien. In the foundry they encounter Emmett (Cillian Murphy), a friend of Lee’s who takes them to his bunker under the foundry. Emmett’s family is dead, and he now lives as a recluse.

Emmett helps Evelyn and Regan patch up Marcus who needs time to heal. Marcus and Regan discover a radio station signal that continuously plays the song “Beyond the Sea”. Regan determines that the song is a clue meant to lead survivors to a nearby island. Regan formulates a plan where if she can reach the radio tower located there, she can transmit the hearing aid’s high-frequency noise to others who can weaponize the signal against the creatures. Regan tells her brother about her plan, but Marcus threatens to tell their mother to prevent Regan from leaving. Nevertheless, Regan sets out on her own for the island. When Evelyn discovers Regan is gone, she begs Emmett to bring her back so she can stay and take care of her injured son and newborn baby.

Emmett sets out to follow Regan. He finds her and saves her from an alien attack after she fails to kill an alien with the shotgun. Emmett tells her to return with him to the foundry. Regan appeals to his sense of duty and persuades Emmett to help complete her mission to the island. Emmett reluctantly agrees.

Meanwhile at the foundry, Evelyn leaves Marcus and her baby to gather medical supplies and additional oxygen tanks for the baby’s soundproof crate. While she is gone, Marcus explores the foundry and discovers the body of Emmett’s wife. Startled, he knocks over some objects, which draws the attention of a nearby alien. Marcus gets back into the bunker, but accidentally locks himself and the baby inside the air-tight chamber, limiting the air supply.

Emmett and Regan arrive at the marina and begin looking for a boat. They are ambushed and attacked by a group of feral humans who attempt to kill Emmett and kidnap Regan. Emmett deliberately creates noise to attract aliens and signs to Regan to jump into the water. Two alien creatures arrive and begin slaughtering the raiding party. Two of the aliens climb on a boat that floats out into the harbor. One of the creatures falls into the water and drowns. Emmett realizes that the creatures cannot swim. Regan acquires a small boat and the two reach the island where a small colony of survivors is living a relatively normal existence. The colony’s leader (Djimon Hounsou) reveals that when the government discovered the creatures were unable to swim, the National Guard moved as many people as possible to the islands.

Evelyn returns to the factory and realizes that there is an alien in the foundry. She distracts the alien and blows up an oxygen tank, but the explosion does not kill the alien. Evelyn frees her children and gives them much needed air. The three continue hiding inside the bunker as the alien continues to hunt for them.

Back on the island, Emmett discovers the boat from the harbor that contained the alien has drifted to the island. He runs back to the colony to warn them, but the alien already has begun attacking the colonists. Emmett, Regan, and the colony leader jump into a car and lead the creature away to the radio station. The alien kills the colony leader while Emmett and Regan escape into the station, looking for the broadcast booth. The alien closes in on Regan, and Emmett intervenes to stop it and is injured. Regan transmits the high frequency signal through the airwaves and the room’s speaker, which causes the alien great pain. Regan impales its exposed head with a metal rod, killing the alien.

Back at the foundry, the alien discovers the bunker and attempts to kill Evelyn and her children. Marcus hears the high-frequency signal over the radio and turns his speaker up. The alien is incapacitated, and Marcus backs the creature away from his mother and brother. He picks up a handgun and kills the alien with a shot to the head. Back on the island, Regan leaves her hearing aid connected to the radio station’s microphone, allowing anyone receiving the frequency to weaponize it.