In the second Shaun of the Sheep movie, Shaun’s farm is invaded by a small alien that causes havoc around the homestead. Shaun befriends the alien, named Lula, and hides her from Farmer John and Bitzer. However, when government agents from the Ministry of Alien Detection (M.A.D.) arrive at the farm and seize Lula’s spaceship, Shaun will be forced to come up with a new way to get her “out of this world” friend home. 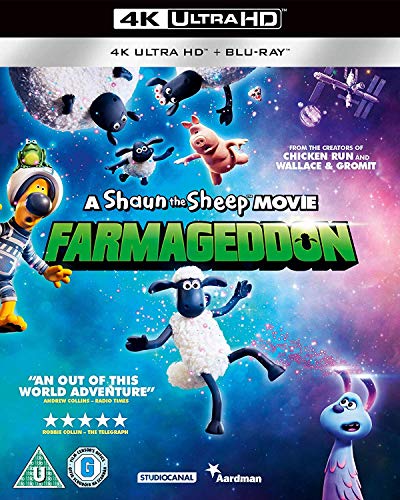 $40.99  in stock
BUY NOW
Amazon.com
*As an Amazon Associate we earn from qualifying purchases.

A mysterious UFO lands near the town of Mossingham. Farmer John (Chris Morrell) and his dog Bitzer (John Sparkes) find the ship but run from it when an alien exits the ship. At the same time at Mossy Bottom Farm, Shaun (Justin Fletcher) and the flock engage in several dangerous activities, only for Bitzer to stop them and ban their escapades completely. After he is prevented from having a barbecue dinner, Shaun orders three pizzas for the flock. However, Bitzer intercepts two of the three pizzas, but both he and Shaun are surprised when they discover the pizza boxes are empty.

The next day, Shaun discovers a trail of pizza crusts and follows them to a little alien. The alien introduces herself as Lula (Amalia Vitale) and tells Shaun that she is from the planet To-Pa. She has extraordinary powers and can mimic sounds. Shaun introduces her to the flock and almost immediately Lula begins to cause havoc around the farm. She damages a combine harvester after she activates it and forms unintentional crop circles. The Farmer (John Sparkes) decides to take advantage of the extra-terrestrial paranoia and creates an alien-based theme park, Farmageddon, so that he can earn enough money to replace the damaged harvester.

Meanwhile, the Ministry of Alien Detection (M.A.D.) takes notice of the UFO claims. The group’s leader, Agent Red (Kate Harbour), is obsessed with proving the existence of aliens since she saw two when she was a child. When M.A.D. discovers that the UFO has disappeared, Farmer John and Bitzer are both arrested. At the same time, Lula and Shaun track down the UFO, which is hidden nearby. The ship is invisible. Shaun and Lula try to get the UFO started but they fail. Lula uses her powers to transmit her memories to Shaun, in the hopes that it will help them to start the ship. The memories reveal that Lula is a child and that she accidentally launched her parents’ spaceship while she was playing on it. The memory transfer reveals that they need an egg-shaped sphere device to activate it. Suddenly, M.A.D. captures the spaceship with Shaun and Lula still on board and takes it to their headquarters.

Once at the M.A.D. base, Shaun and Lula sneak out of the ship and locate the egg-shaped device. M.A.D. is distracted by Bitzer, who attempts to follow Shaun, but is mistaken for an alien by the government agents. Shaun and Lula restart the ship and escape the base with Bitzer. They plot a course for Lula’s home on To-Pa. While they are in route, Shaun ignores Bitzer’s instructions not to touch anything and causes the ship to crash back on Earth. Lula is devasted that the UFO is destroyed. Shaun feels bad for what he has done and works to find another way to get Lula home. Shaun discovers that the device can be used to contact Lula’s parents back on her planet. However, for it to work, the signal needs to broadcast from a great height. Shaun suggests that he and Lula climb to the top of the Farmer’s theme park signboard to make contact.

Shaun’s entire flock and Bitzer help the pair climb the sign while the Farmer launches a show at the theme park. At the same time, Red arrives and begins chasing Shaun and Lula up the signboard using a robotic device. Shaun works to prevent Red from capturing his friend and manages to send a distress message to To-Pa. Lula’s parents, Ub-Do (Richard Webber) and Me-Ma (Amalia Vitale), arrive and reunite with their daughter. Red recognizes the aliens as the same ones she saw as a child and welcomes them. Shaun, Bitzer, and the flock say goodbye to their friend as the ship takes off. The entire ship landing and liftoff is seen by visitors to the theme park who believe that its part of the show. On their way back to To-Pa, the aliens find the Farmer on their UFO, prompting them to turn around and return to Earth.

In a mid-credit scene, Shaun, Bitzer, Timmy (Justin Fletcher), and the flock are playing with a frisbee, while the Farmer tries out his new harvester. The frisbee jams the systems on the harvester, causing it to explode, scaring Shaun, Bitzer, and Timmy.

In the post-credit scene, a man with a M.A.D. hazmat suit enters a black room with a keyboard. He removes his suit and reveals himself to be Professor Brian Cox and proceeds to play D:ream’s “Things Can Only Get Better” on the keyboard. Timmy enters the room and unplugs the keyboard, telling the Professor that it is too loud.