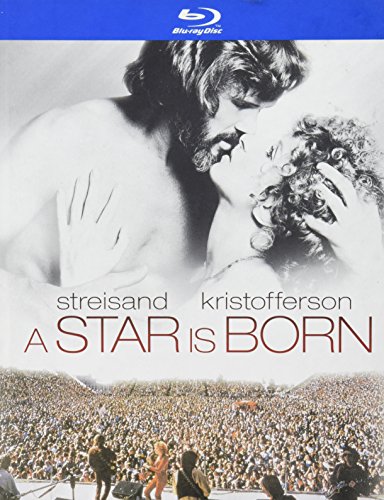 A Star Is Born [Blu-ray]

Warner Brothers Home Entertainment is releasing a Blu-ray DigiBook version of A Star is Born this February.  The film is directed by Frank Pierson and stars Barbra Streisand, Kris Kristofferson, Gary Busey, and Sally Kirkland.   A Star is Born hits shelves in stores on February 5, 2013.

In the film, talented rock star John Norman Howard (Kristofferson), has seen his career begin to decline.  Too many years of concerts and managers and life on the road have made him cynical and the monotony has taken its toll.  Then he meets the innocent, pure and very talented singer Esther Hoffman (Streisand).  As one of his songs in the movie says “I’m gonna take you girl, I’m gonna show you how.”  And he does.  He shows Esther, the way to stardom while forsaking his own career.  As they fall in love, her success only makes his decline even more apparent.

A Star Is Born was released in December 1976 and grossed over $80 million at the box office.  The 1976 musical was nominated for four Academy Awards winning won for Best Original Song.  It also won five Golden Globes including best actress in a musical/comedy.

The Blu-ray DigiBook will have several special features, including: an audio commentary by Barbra Streisand; several additional scenes; a trailer gallery; and wardrobe tests.

Disclaimer: Affiliate links are contained in this post. This means when you click a link, and purchase an item, Movie House Memories will receive an affiliate commission. Advertisers and Affiliate Partnerships do not influence our content. See our Terms of Use about the inclusion of affiliate links on this site for more information.
January 20, 2013
1 minute read
Show More
Back to top button
Close
Close