Several years after the events of the first Airplane! film, Ted Striker and Elaine Dickinson are back with a new disaster and a new adventure. This time in space! Striker is relegated to a mental hospital after he is blamed for the crash of a test shuttle. Months later, Elaine is promoted to the rank of computer officer on the first flight to the Moon on Mayflower One. However, when Striker’s predictions of the dangerousness of interstellar flight come true, only Striker and Elaine can save the passengers of Mayflower One from certain doom. 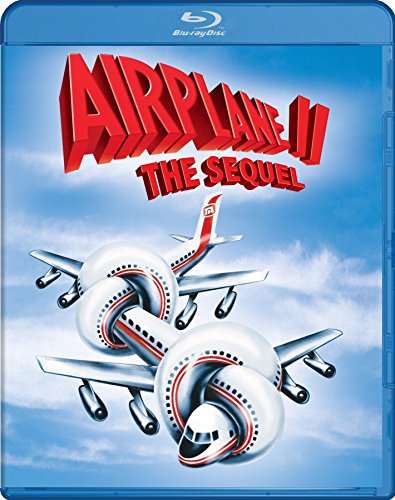 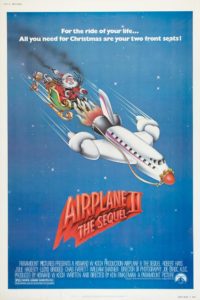 The film picks up several years after the events in the first Airplane! film. Interstellar space travel is now possible, and a new space shuttle is preparing to carry passengers to the Moon to continue to colonize and support a station on its surface. The shuttle, Mayflower One, has been rushed to launch and issues with its safety have been ignored so that the project could move forward. The only person to speak out is Ted Striker (Robert Hays), the pilot who is framed for a crash during a test flight of the shuttle. Striker is declared mentally incompetent and committed to a mental hospital. As a result, Ted’s relationship with Elaine Dickinson (Julie Haggerty) has come to an end. Despite the cover up, the head of the ground crew, a man known as the Sarge (Chuck Connors), also suspects that the project has catastrophic issues, but he defers to the shuttle management (Rip Torn and John Dehner).

The flight crew of the shuttle is made up of Captain Clarence Oveur (Peter Graves), navigator/co-pilot Unger (Kent McCord), and first officer/engineer Dunn (James A. Watson Jr.). Elaine works as the computer officer for the flight. After her relationship with Striker ended, Elaine became engaged to Simon Kurtz (Chad Everett), another member of the flight crew. In the mental hospital, Ted hears that the shuttle is preparing to launch and breaks out. However, the experience of the shuttle accident has caused Striker’s PTSD from his actions during the War over Macho Grande to return, as well as his drinking problem. Nevertheless, Striker arrives at the airport and purchases a ticket for the flight.

Once on board, Striker tries to convince Elaine not only to take him back, but to turn the shuttle around before there is a disaster. During the flight, the shuttle suffers a short circuit that results in the onboard computer, known as ROK, malfunctioning. ROK sets the Mayflower One’s course directly into the Sun. Oveur sends Unger and Dunn back to the computer core to deactivate ROK. However, the artificially intelligent computer acts to defend itself and blows both crew members out the airlock. Striker is the only passenger to know that the crew members are dead. Oveur attempts to deactivate ROK from the cockpit, but ROK gasses Oveur with poisonous fumes, leaving no one left to pilot the shuttle.

And I can sum it all up in just one word: courage, dedication, daring, pride, pluck, spirit, grit, mettle, and G-U-T-S, *guts*. Why, Ted Striker’s got more guts in his little finger than most of us have in our large intestine, including the colon! Steve McCrowsky (Lloyd Bridges)

Elaine informs Simon of the loss of the command crew, and the cowardly Simon abandons the ship in the sole escape pod. Striker is once again called on to pilot a doomed flight. This time, however, confidence is not Striker’s problem. While communicating with air traffic controller Steve McCrowsky (Lloyd Bridges), Striker is informed that one of the passengers, Joe Seluchi (Sonny Bono), has brought a bomb on the shuttle in a briefcase. The suicidal Seluchi plans on blowing himself up to provide an insurance payout for his wife. Striker manages to get the bomb away from Seluchi and then uses it to blow up ROK. Once free of the computer’s control, Striker sets course for the nearest star base on the Moon.

The detonation of the bomb has caused additional damage to the shuttle which requires Striker to get everyone to safety sooner. McCrowsky transfers control of the shuttle rescue to the commanding officer on the lunar base, Commander Buck Murdock (William Shatner). Murdock was one of Striker’s fellow pilots over Macho Grande and still holds a grudge against Striker for the loss of his friends. Nevertheless, Murdock agrees to help Striker and despite some hiccups, Striker manages to land the shuttle relatively safely on the Moon. Striker and Elaine reunite and fall back in love. Some time later, the couple marry. After the shuttle safely lands, Seluchi looks into the cockpit and asks for the return of his briefcase.

A post credits message promises Airplane III Coming from Paramount Pictures, a film that would never be made.