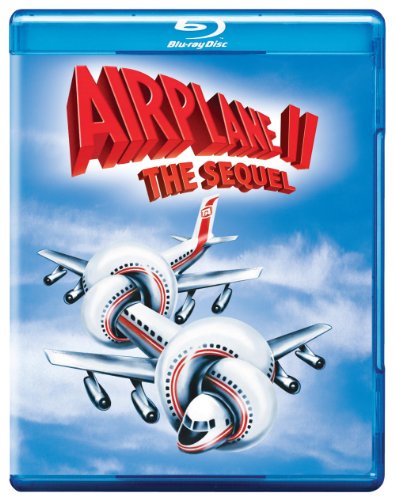 Warner Bros. Home Entertainment has announced the addition of the comedy Airplane II: The Sequel to their upcoming slate of Blu-ray releases. The film is being released as part of their distribution deal with Paramount Pictures. The comedy was written and directed by Ken Finkleman and stars Robert Hays, Julie Hagerty, Lloyd Bridges, Peter Graves, Chuck Connors, and William Shatner. Airplane II: The Sequel will be available for purchase online and in stores beginning on October 8th.

In the film, there’s a mad bomber on board the first lunar shuttle, it’s about to self-destruct, the engines aren’t working and — worst of all — the flight crew discovers they’re completely out of coffee! It’s the high flying lunacy of Airplane! taken to the next level as Hays and Hagerty fly out of the ozone in their hilarious original roles. Can Hays save the day again… without caffeine? Fasten you seatbelts for a ride you’ll never forget.

Airplane II: The Sequel was released in December of 1982 and grossed over $27 million in worldwide box office.

Disclaimer: Affiliate links are contained in this post. This means when you click a link, and purchase an item, Movie House Memories will receive an affiliate commission. Advertisers and Affiliate Partnerships do not influence our content. See our Terms of Use about the inclusion of affiliate links on this site for more information.
June 14, 2013
1 minute read
Show More
Back to top button
Close
Close