Set in the 1850’s and based on a true story, the film tells the story of Robert and Mamie Eunson who move from Scotland to Eureka, Wisconsin to begin a new life in America. Once there, they build a home and a family together while at the same time starting a successful business. However, tragedy strikes and the Eunson children are soon left without their parents. The eldest son, Robbie, is charged with finding new homes for each of his siblings on Christmas Day. 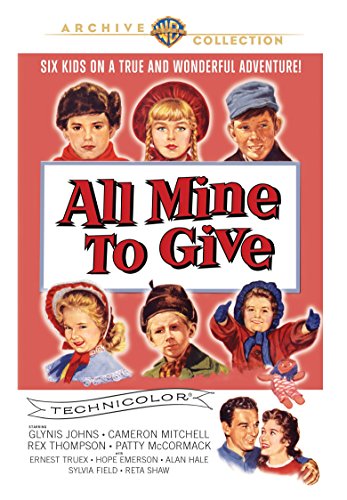 ‘All Mine to Give’ Movie Summary

The summary below contains spoilers.
In 1856, Robert and Mamie Eunson (Cameron Mitchell and Glynis Johns) travel to Eureka, Wisconsin from Scotland. Robert and Mamie have come to America to live with Mamie’s uncle Will Jameson and to begin a family in the new world. However, once they arrive, they are informed that Will was killed when his cabin burned to the ground. The couple decides to stay and rebuild a new cabin to begin their family. Robert starts building the cabin by himself, but soon he is joined many of the locals who help Robert build the cabin in one day.

Soon, the already pregnant Mamie has her first child with the assistance of a midwife, Mrs. Pugmeister (Hope Emerson). The couple name their first son Robbie (Rex Thompson). While Mamie stays at home to take care of Robbie, Robert goes to work at a logging camp as a lumber jack where he is often away for weeks at a time. The Scottish Robert clashes with the Irish American foreman Tom Cullen (Alan Hale), but soon wins over his boss with his hard work and right hook. Tom elevates Robert to supervising the transportation of the trees down the river, which allows Robert to eventually create his own successful boat-building business. During the same time, Mamie gives birth to five more children: Jimmy (Stephen Wootton), Kirk (Butch Bernard), Annabelle (Patty McCormack), Elizabeth (Yolanda White), and Jane (Terry Ann Ross).

Please, ma’am, I was wondering if you’d care to have my sister. Robbie Eunson (Rex Thompson)

The Eunsons are a successful family and are very active in the community, with Mamie playing host to many of the other women in town. However, both Mamie and Robert have run ins with the wealthy, yet miserable, Mrs. Runyon (Reta Shaw) over the years. One day, Kirk becomes ill and is diagnosed with diphtheria by Doctor Delbert (Ernest Truex). The doctor tells Mamie that she needs to get the other kids out of the house. Mamie stays with Kirk while Robert takes the other children away to a friend’s cabin. Both parents struggle with the possibility of losing their son, but eventually Kirk recovers, and the other children remain free of the illness. Unfortunately, Robert contracts diphtheria after sharing a kiss with his son before he took the other kids away. Ultimately, Robert dies.

With the death of his father, Robbie becomes the man of the house and takes on more responsibilities for his family although his mother insists that he continue his education. Mamie works as a seamstress to help provide some income for the home. Eventually, Mamie exhausts herself and contracts typhoid. Mamie slowly loses her battle with the disease and charges Robbie as the eldest child with finding new, good homes for his siblings. She asks him to place his brothers and sisters with families with children so the kids will not be lonely.

After Mamie’s funeral, Mrs. Runyon yells at the townspeople that they need to decide what to do with the Eunson children. As it is Christmas Eve, Robbie and Jimmie ask Dr. Delbert if they could discuss the issue in two days so that the kids can spend one last Christmas with each other. The townspeople agree to table the discussion until after the holiday. However, Robbie has a plan to follow his mother’s wish for him to place his siblings with families. He makes a list of families that are appropriate, and one by one, places them with families around town. Mrs. Runyon comes to the Eunson cabin and attempts to take Jane with her. Robbie and his brothers stop her, but Robbie knows that she will be back. Robbie places his brothers and then sets off with Jane to a nearby town, ultimately leaving her with a strange woman who seems to be overjoyed to get Jane. Robbie says goodbye to his sister before he strolls off by himself to start a new life alone working at the same logging camp that his father worked at years before.

Universal-International released All Mine to Give on November 13, 1957. Allen Reisner directed the film starring Glynis Johns, Cameron Mitchell, and Rex Thompson.