Director Ishiro Honda returns again for the first Godzilla movie expressly for children. Economizing by reusing effects shots from other films in the series, All Monster Attack tells the story of Ichiro, a lonely latchkey kid who finds solace in his dreams of befriending Minilla, the titular progeny of Son of Godzilla, whose parent is also often absent. In this thoughtful, human-scale story, boy and monster learn together what it means to grow up. 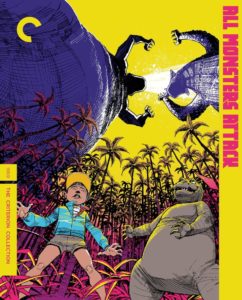 Ichiro Miki is a lonely young boy, who lives in a very run down Kawasaki, Japan. Ichiro’s parents are constantly working to make a comfortable life for their family, in such a devastated neighborhood. Ichiro’s only friends are a young girl, Sachiko, and his toy maker neighbor, Shinpei Inami. To escape his lonely life and cope with being bullied by his fellow school children, Ichiro dreams of being shipped off to “Monster Island,” where he watches Godzilla battle various adversaries, like everyone’s favorite red lobster, Ebirah, a trio of praying mantises called Kamacuras, Gorosauras, Manda the dragon, Anguirus, and a giant condor. At the end of his dream, Godzilla staves off two Kamacuras but Ichiro is chased into a cave by the third. Ichiro is rescued in the cave by his own Lassie, in the form of Minilla! The youngsters become instant friends and easily communicate with each other. Ichiro learns that Minilla is dealing his own bully, Gabara, the giant ogre. Ichiro is immediately awakened by Shinpei, who tells Ichiro that his parents will be working late, leaving Ichiro home alone until the next day.

Meanwhile, two bank robbers, who stole ¥500,000,000, are hiding out in an abandoned building near Ichiro’s apartment. When Ichiro goes into the dilapidated building to play with the ruins, he finds a driver’s license that belongs to one of the robbers. The robbers spot the lad messing with the wallet and begin to track his movements.

A very caring Shinpei feeds Ichiro a filling dinner, which causes the young boy to need an immediate nap. Ichiro begins dreaming about a return to “Monster Island,” where he and Minilla reunite. The youngsters watch Godzilla and Ebirah play volleyball with a giant boulder, before tussling underwater. Next, Godzilla is seen destroying Kumonga, the giant spider, before being attacked by military fighter jets. After, Godzilla swats the fighter jets away; he is put into a hostile situation with Minilla’s nemesis, Gabara. Minilla decides to face off with Gabara, one on one, but the battle was short lived, with Gabara embarrassing the little monster. Godzilla takes his protégé off and gives him a familiar training session.

Ichiro is startled and pulled from his dream world by the two bank robbers. The thieves kidnap Ichiro, try to find a getaway car, but struggle to make a clean break. Ichiro floats back into his dream world during all of this drama, where Minilla battles with Gabara one more time. A determined Minilla uses his speed against the much larger monster, but struggles to win the contest. Godzilla coaches Minilla from the side and eventually engages with Gabara himself. With Ichiro’s help, Minilla climbs up a cliff and springboards Gabara away for a personal victory. However, Gabara wasn’t done just yet. The angry ogre returns and tries to take down the “King of all Monsters.” But Gabara’s attempt to take down “the king” is dashed away by Godzilla’s electric battling skills. Gabara, the big bad bully, retreats in fear, leaving Minilla alone forever.

Ichiro is again awakened by the robbers, but the boy is now full of courage and inspiration, thanks to Minilla’s big win. The robbers go on the run with their young hostage, but the engine in their getaway car has issues, allowing Ichiro to escape into an abandoned building. While Ichiro is chased by the robbers, his toymaker neighbor, Shinpei, is able to locate their running car, with the stolen money in it. Ichiro’s friend calls the police, who come to help the lad. While chasing Ichiro trough the building, one of the robbers hurts his leg and is put out of commission. The other robber tries to knife Ichiro, but Ichiro turns the tables and sprays the robber with a fire extinguisher. Ichiro escapes from the building, leading the baddies directly to the cops and their arrest.

The next day, Ichiro is challenged by the bullies from his school. A confident Ichiro channels his inner Minilla, stands up to the bullies, and defeats them in a minor skirmish. Ichiro proves to the bullies that he is no longer a pushover and all of the school kids become friends.