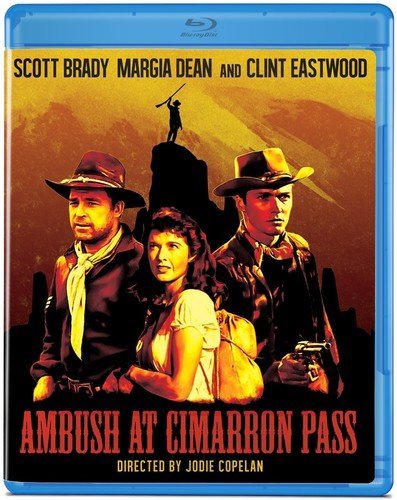 Olive Films has announced that addition of the western Ambush at Cimarron Pass to their upcoming slate of Blu-ray releases. The film was directed by Jodie Copelan and starred Scott Brady, Margia Dean, Clint Eastwood, Irving Bacon, and Frank Gerstle. Ambush at Cimarron Pass is currently available for pre-order online and will be available in stores everywhere beginning on September 24th.

Led by Sgt. Matt Blake (Brady), a Yankee cavalry unit escorting a prisoner through Indian Territory has no choice but to join forces with a band of former Confederates when both groups come under attack from hostile Apaches. Although the Union boys and the Southerners manage to hang on to their rifles, the Indians up the ante when they steal the interlopers’ horses. A young Eastwood received third billing in this 1958 oater.

Disclaimer: Affiliate links are contained in this post. This means when you click a link, and purchase an item, Movie House Memories will receive an affiliate commission. Advertisers and Affiliate Partnerships do not influence our content. See our Terms of Use about the inclusion of affiliate links on this site for more information.
September 22, 2013
1 minute read
Show More
Back to top button
Close
Close