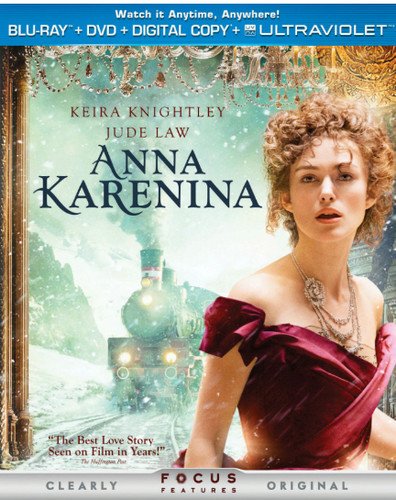 Universal Pictures Home Entertainment has announced that it will release a combo pack edition of Anna Karenina onto Blu-ray this February.  The film is directed by Joe Wright and stars Keira Knightley, Jude Law, Kelly Macdonald, and Aaron Taylor-Johnson.  Anna Karenina will be available for purchase in either Blu-ray combo pack or DVD on February 19, 2013.

Anna Karenina was adapted by Academy Award-winning screenwriter Tom Stoppard from Leo Tolstoy‘s timeless classic novel.  At the twilight of an empire, Anna Karenina (Knightley), the beautiful wife of one of Russia’s most esteemed men (Law), has it all.  But when she meets the dashing cavalry officer Vronsky (Taylor-Johnson), there is a mutual spark of instant attraction that cannot be ignored.  Anna is swept up in a passionate affair that will shock a nation and change the lives of everyone around her.

Anna Karenina was released in November of 2012 and grossed over $12 million at the box office to date.  The film is nominated for four Academy Awards at this year’s ceremony.

Disclaimer: Affiliate links are contained in this post. This means when you click a link, and purchase an item, Movie House Memories will receive an affiliate commission. Advertisers and Affiliate Partnerships do not influence our content. See our Terms of Use about the inclusion of affiliate links on this site for more information.
January 22, 2013
1 minute read
Show More
Back to top button
Close
Close