Armed with the astonishing ability to shrink in scale but increase in strength, master thief Scott Lang must embrace his inner hero and help his mentor, Dr. Hank Pym, to plan and pull off a heist that will save the world. 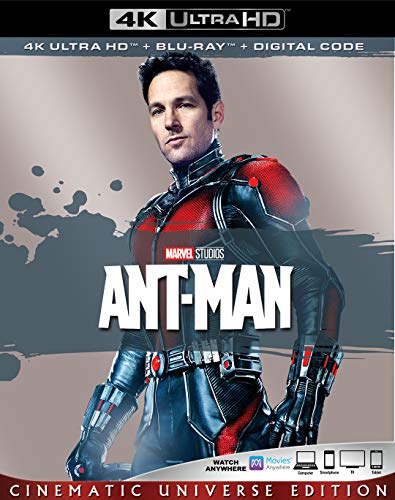 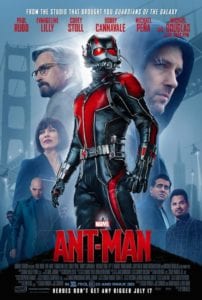 Ant-Man starts with scientist Hank Pym’s resignation from S.H.I.E.L.D. in 1989 after he discovers their attempt to replicate his Ant-Man shrinking technology. Since he believes that the technology would be dangerous if anyone replicated it, Pym vows to hide it for as long as he shall live.

We cut to the present day where we find Pym’s estranged daughter, Hope van Dyne, along with his former protégé, Darren Cross, have forced him out of his company named Pym Technologies. Cross is now pretty darn close to perfecting a shrinking suit of his own which he’s dubbed Yellowjacket, and that alarms Pym quite a bit.

Meanwhile, Scott Lang is your average, affable guy making his way through life, but he’s also a convicted thief. He’s released from prison, and immediately moves in with his old cellmate, Luis to start anew. When Lang visits his daughter Cassie unannounced, his ex-wife, Maggie, and her police-detective fiancé, Paxton rag on him about not paying child support.

Pressed for money, and unable to get a decent job because of his criminal record, Lang falls back on bad habits and worse choices. He agrees to help Luis and his boys commit a burglary. When Luis cracks the house’s safe, he only finds a useless old motorcycle suit inside. Since he went to all that trouble breaking the law, he takes it so he has something to show for his effort.

However, when he tries the suit on at home, Lang shrinks to the size of an insect. This terrifies him beyond belief, so he breaks back into the home to return it, but the cops show up, and arrest him on the way out. It turns out that the house belongs to Hank Pym, and he visits Lang in jail with the suit. He smuggles it into Lang’s cell to break him out.

Pym used the unsuspecting Luis to get Lang to steal his vest as a test. He wants Lang to become Ant-Man, and steal the Yellowjacket suits from Cross. Pym has spent a lot of time spying on Cross, and he know of all of his nefarious plans he intends to carry out with the suit. So, Pym and Van Dyne train Lang how to fight foes and control ants.

The reason that Van Dyne resents her father is that she blames him for her mother’s death. Her mom, Janet, was also once known as the Wasp, and she disappeared into a subatomic quantum realm while disabling a Soviet nuclear missile. Pym gives Lang a solemn warning that her fate could be his too if he ever overrides his suit’s regulator.

Before Lang is ready to take on Cross, Pym sends him to the Avenger’s HQ to steal a device that will help improve their chances against Cross. Once there, he briefly fights Sam Wilson, but is successful in his mission.

By now, Cross has perfected his Yellowjacket suit, and unveils it at a ceremony at Pym Technologies’ headquarters. Lang is there, along with his crew and a swarm of flying ants. They infiltrate the building while the event goes on, and sabotage the company’s servers. They then plant explosives throughout the building too.

He then tries to swipe the Yellowjacket suit, but Cross captures him, Pym, and Van Dyne. Cross now intends to sell both the Yellowjacket and Ant-Man suits to Hydra. However, Lang breaks free, and the three take out most of the Hydra agents, but one escapes with a vial of Cross’ particles and Pym winds up shot. Lang chases after Cross, as the explosives detonate inside the headquarters. As it implodes on itself, Pym and Van Dyne manage to escape.

Cross slips into the Yellowjacket suit, and then attacks Lang. Paxton is also there, and he arrests Lang. Cross then kidnaps Cassie, and uses her as bait to lure Lang into one more fight. Lang goes against Pym’s advice, and overrides the regulator. He shrinks to subatomic size, and penetrates Cross’ suit. There, he sabotages the suit which forces it to shrink uncontrollably; squishing Cross dead.

Lang does disappear into the quantum realm, but he’s able to reverse the effects, and return to our macroscopic world. Paxton is grateful for Lang’s act of selflessness, so he covers for him to keep him from being sent up the river one more time.

Once Pym sees that Lang not only survived, but returned from the quantum realm, he wonders if his wife is alive as well. Later, Lang meets Luis again, and he tells him that Sam Wilson wants a word with him.

In a mid-credits scene that foreshadows Ant-Man and the Wasp, Hank Pym shows Hope an advanced, but unfinished prototype of the Wasp Suit which she replies, “It’s about damn time.”

In a post-credits scene from Captain America: Civil War, Captain America and Falcon discuss what to do with the trapped Winter Soldier. With “the accords” preventing them from contacting Tony Stark, Falcon recommends “a guy” who can help them.