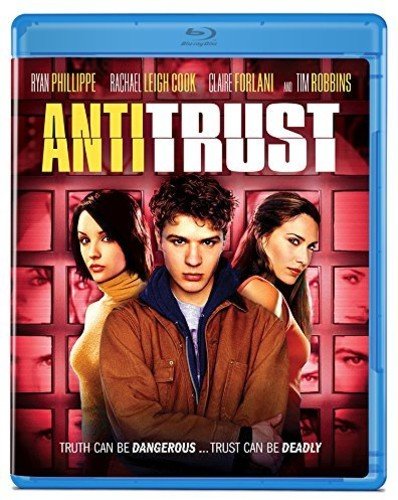 Olive Films has announced that they will release the 2001 crime thriller Antitrust onto Blu-ray. The film was directed by Peter Howitt and starred Ryan Phillippe, Tim Robbins, Rachael Leigh Cook, Claire Forlani, and Richard Roundtree. Antitrust will be available for purchase online and in stores beginning on September 22nd.

Only the best of the best tech programmers will make their way into NURV, a cutting edge high tech corporation headed by the charismatic Gary Winston (Robbins) and Milo Hoffman (Phillippe) is one of the chosen few. The seemingly innocuous handling of data turns sinister when Hoffman’s friend, Teddy (Yee Jee Tso) is murdered. Milo will soon discover the deaths of other programmers who have close ties to the company. What secret is NURV harboring … and would they kill to keep it hidden? Is there a link to the deaths or is it simply paranoia? Who can Milo trust when that trust may come at a deadly price?

Antitrust was released January 12, 2001 and went onto gross over $11 million at the box office.

Here is the theatrical trailer for Antitrust, courtesy of Movieclips Trailer Vault.

Disclaimer: Affiliate links are contained in this post. This means when you click a link, and purchase an item, Movie House Memories will receive an affiliate commission. Advertisers and Affiliate Partnerships do not influence our content. See our Terms of Use about the inclusion of affiliate links on this site for more information.
August 6, 2015
1 minute read
Show More
Back to top button
Close
Close