In Arachnophobia, a large spider from the jungles of South America stows away in a crate with a dead body to America where it mates with a local spider. Soon after, the residents of a small California town die from spider bites. It’s up to a couple of doctors and an insect exterminator to eliminate these arachnid
a before they eliminate the entire town. 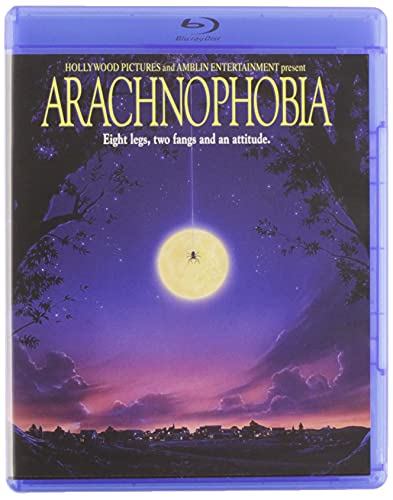 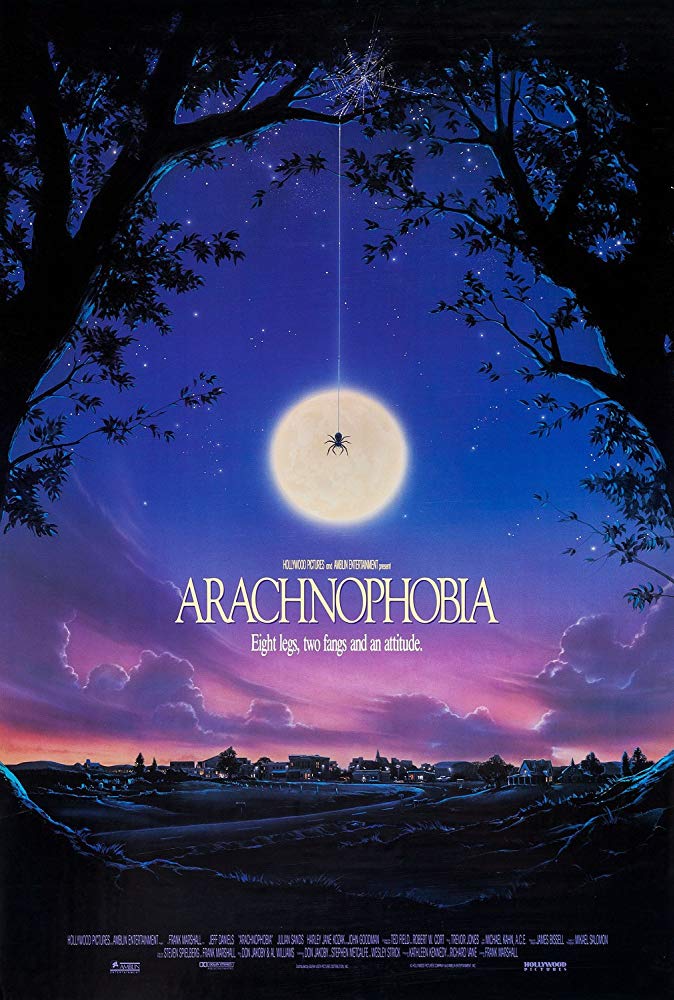 Arachnophobia begins in the Amazon rainforest. Entomologist Dr. James Atherton (Julian Sands) is looking for a new species of insects and arachnids. Out in a Venezuelan tepui, he finds an aggressive new species of spider. Once he captures it, he discovers that this type lacks sex organs—making it a drone or soldier—something you do not find in spiders.

After one of the non-drone males of the same species bites a nature photographer named Jerry Manley (Mark L. Taylor), she has a seizure from its venom and dies. The remaining scientists decide to blame his death on a fever, and bring the body back to the United States. Unbeknownst to them, the spider crawls into his coffin, and returns with the team.

By the time Manley’s corpse arrives to the funeral home in his hometown of Canaima, California, his body is desiccated. The spider escapes to the outside, where a crow picks it up. It bites the bird which falls to the ground, dead. It lands outside of Ross Jennings’ (Jeff Daniels) barn. He’s a family physician who just moved to town from San Francisco, but finds a lack of patients after the town’s physician, Sam Metcalf (Henry Jones), chooses not to retire. Ironically (or not), Ross and his son suffer from extreme arachnophobia.

Outside the barn, the Amazonian spider mates with a female domestic house spider, and it makes a nest in Jennings’ barn. Hundreds of infertile drones, with their father’s lethal bite, hatch from it.

One of these new spiders bites Ross’ first patient, Margaret Hollins (Mary Carver). She dies shortly thereafter. Metcalf suspects Ross of malpractice because Ross took Margaret off medication Metcalf previously prescribed. Once a spider kills high school football player, Todd Miller (Nathaniel Spitzley), right after Ross performed a routine team checkup on the boy, he earns the nickname, Dr. Death. Metcalf himself is the next to die—right in front of his wife too.

With Metcalf gone, Ross becomes Canaima’s sole doctor. He soon detects a minute amount of an unknown toxin in his body, and suspects some sort of deadly arachnids have infested the town.

Ross and the county coroner, Milton Briggs (James Handy), perform an autopsy on each of the other victims. They confirm Ross’ suspicion that spider bites caused each death. Ross asks Atherton, who is currently the country’s leading expert on spiders, to aid with his investigation. However, Atherton’s skeptical, and only sends his assistant, Chris Collins (Brian McNamara).

Collins quickly becomes convinced a deadly strain of spiders have invaded Canaima. Ross and Collins eventually catch one of them, and after Collins mentions this new species Atherton discovered back in the Amazon, Ross realizes that one of them hitched a ride back to California.

Atherton now joins Ross and Collins, along with Milt, Sheriff Lloyd Parsons (Stuart Pankin), and local exterminator, Delbert McClintock (John Goodman). They quickly discover these spiders have a short life expectancy. Atherton reveals the spiders are soldiers that will eliminate any potential threats to the lead male spider he calls the general.

He soon learns that the general produced a queen, and likely mated with her to produce a second nest. She would guard that new nest, and potentially produce many fertile offspring there. The group sets out to destroy both nests—killing the queen and her general—before they can spread throughout the country.

Ross deduces that one nest is in his barn, and he sends Delbert there to destroy it. Once there, Delbert finds the general bit Atherton after disturbing the web. With Atherton dead, Ross and Collins discover the spiders have also killed mortician Irv Kendall (Roy Brocksmith) and his wife Blaire (Kathy Kinney). However, they are able to get Ross’ family out of their infested house before they perish. Unfortunately, on the way out, Ross falls through the floor and into his wine cellar. There he finds the spider’s second nest, and both the queen and general guard it.

Ross electrocutes the queen to death before taking on the general. He tries to burn the second egg sac, but winds up trapped underneath some debris that fell. The general moves in for the fatal bite.

Finally, the good doctor overcomes his fear of spiders, and hurls the general into the fire. Just as the egg sac hatches, the general jumps out of the fire one last time. Ross shoots it with a nail gun, and the flaming spider falls onto the egg sac—destroying the nest. Delbert arrives just in time to rescue Ross.

With the general, queen and egg sac destroyed, Delbert easily takes out the remaining drones. He either kills them or leaves them to die from their shortened life spans. Regardless of how they go, the threat is now over.

Ross immediately moves his family back to San Francisco. Once there, he toasts some wine with his wife Molly (Harley Jane Kozak). An earthquake tremor interrupts it.