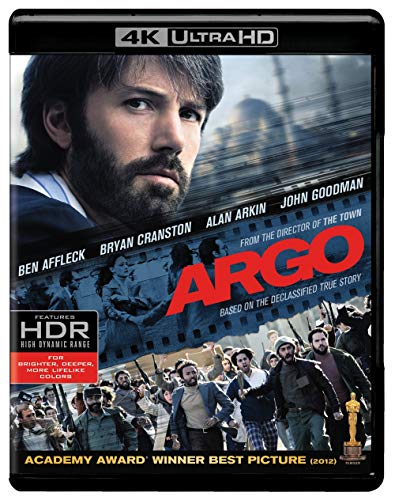 Based on real events and the “Escape From Tehran” article by Joshuah Bearman, the dramatic thriller Argo chronicles the life-or-death covert operation to rescue six Americans, which unfolded behind the scenes of the Iran hostage crisis, focusing on the little-known role that the CIA and Hollywood played—information that was not declassified until many years after the event.  On November 4, 1979, as the Iranian revolution reaches its boiling point, militants storm the U.S. Embassy in Tehran, taking 52 Americans hostage.  But, in the midst of the chaos, six Americans manage to slip away and find refuge in the home of Canadian Ambassador Ken Taylor.  Knowing it is only a matter of time before the six are found out and likely killed, the Canadian and American governments ask the CIA to intervene.  The CIA turns to their top “exfiltration” specialist, Tony Mendez (Affleck), to come up with a plan to get the six Americans safely out of the country.  A plan so incredible, it could only happen in the movies.  The film also stars Alan Arkin, Tate Donovan, and Rory Cochrane.

Argo was released in October 2012 and grossed over $105 million at the box office.  Currently, it has been nominated for five Golden Globe Awards and is considered one of the front runners for several awards at the 2013 Academy Awards.

Warner has also released a list of special features included with the Blu-ray Combo Pack, including:  a feature length picture in picture: eye witness account; an audio commentary; Rescued from Tehran: We Were There feature; Argo: Absolute Authenticity feature; Argo: The CIA & Hollywood Connection feature; Escape From Iran: The Hollywood Option feature; and an UltraViolet copy of the film.