This movie reveals the incredible, never-before seen answer to every child’s question: “So how does Santa deliver all those presents in one night?” The answer: Santa’s exhilarating, ultra-high-tech operation hidden beneath the North Pole. But at the center of this movie is a story about a family in a state of comic dysfunction and an unlikely hero, Arthur, with an urgent mission that must be completed before Christmas morning dawns. 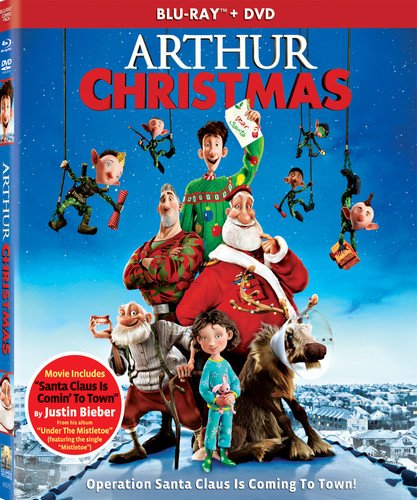 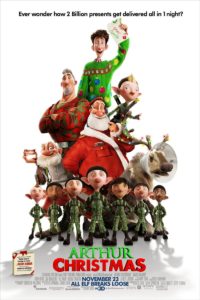 On Christmas Eve, Santa and his massive staff of elves helm the command center of Santa’s mile-wide air vehicle, the S-1. The high-tech aircraft allows Santa to deliver his presents around the world in one night. The current Santa, Malcolm Claus (Jim Broadbent), is more of a figurehead, with many of the operations run by his eldest son Steve (Hugh Laurie) and the elves. Steve oversees the complex operations of modern-day present delivery with the assistance of his assistant elf, Peter (Marc Wootton), from his command center underneath the North Pole. Steve expects to be named the new Santa Claus when his father announces his retirement. Malcolm has a second son, Arthur (James McAvoy), who has the lowly job of answering the letters to Santa, who is very satisfied with his station.

An unexpected event during the Christmas Eve deliveries causes one present to be undelivered. Malcolm returns to the North Pole on S-1 and announces that he intends to remain Santa for another year, which frustrates Steve. The Claus family gathers for a celebratory dinner after another successful Christmas Eve. Malcolm, Steve, and Arthur are joined by Grand Santa (Bill Nighy) and Margaret Claus (Imelda Staunton), Malcolm’s wife. The family quarrels, with Grand Santa expressing resentment of Steve’s modernization of the present delivery process. Steve is alerted to a problem, and he and Arthur return to the main command center. They are informed by an elf named Bryony Shelfley (Ashley Jensen) of the undelivered present, a wrapped bicycle for a little girl named Gwen in Trelew, England.

Arthur personally responded to Gwen’s letter, so he is aware of how important the gift is to the young girl. Steve argues that one missed present out of billions is an acceptable error and announces that this year’s Christmas as the most successful in history. Grand Santa learns of the situation and convinces Arthur that they should deliver the last present together in the traditional way. They pull out Grand Santa’s old wooden sleigh, EVE, and harness eight reindeer to begin their journey to Trelew. Grand Santa uses the ancient Santa maps to direct them. Bryony joins them.

The trio gets lost on three different continents and lose several of their reindeer along the way. They also cause the world’s military forces to respond to what they believe is an alien invasion. Along the way, Arthur learns, to his disappointment, that Grand Santa’s true motive for the trip is to fulfill his ego to have his picture taken delivering the present with the reindeer. Eventually, the trio loses the sleigh as well. When they contact Steve for his assistance, Steve refuses to help them.

Meanwhile, the elves become increasingly alarmed at the rumors of an undelivered gift and the Clauses’ indifference to the situation. In response to the elves panic, Malcolm, Margaret, and Steve take the S-1 to deliver a superior present, but they take it to the wrong child. At the same time, Arthur recovers the sleigh while the trio is stranded in Cuba. They use the sleigh to reach England, but they lose the last of their reindeer. Even worse, the sleigh takes fire from a Predator drone that is scrambled by Chief De Silva (Eva Longoria) of UNFITA. Arthur and Bryony parachute to safety, while Grand Santa acts as a diversion. The drone destroys the sleigh, but Grand Santa and the last reindeer escape together.

All four male Clauses rush to Gwen’s house. They arrive at about the same time, only to begin engaging in an argument about who should place the gift under the tree. Noticing that only Arthur genuinely cares about the girl’s feelings, the elder Clauses realize that he is the sole worthy successor. Malcolm decides that Arthur should have the honor of the gift placement, and Steve acknowledges his brother’s worthiness and his own shortcomings. Little Gwen catches a glimpse of a snow-bearded Arthur just before he vanishes up into the S-1.

In a series of postscript to the film, Malcolm goes into a happy retirement with Margaret. He becomes a new companion to Grand Santa, who is more satisfied with his retirement now that he has company. Steve finds new contentment as the chief operating officer of the North Pole. Byrony is promoted to Vice-President of Packing in the Pacific Division. Arthur renames S-1 as EVIE and has it retrofitted to be pulled by a team of five thousand reindeer led by the original eight. Arthur happily accepts his role as Santa Claus XXI.