In the 1960’s, Austin Powers is a hipster international spy who always has one thing on his mind…sex. However, when he is not between the sheets, he is hot on the trail of his arch nemesis, Dr. Evil. When Dr. Evil cryogenically freezes himself in order to threaten the Earth, Austin has himself frozen so that he will be there to stop him. However, when both of them return in the 1990’s, they will not only have to combat each other, but the culture shock that comes with being frozen for thirty years. 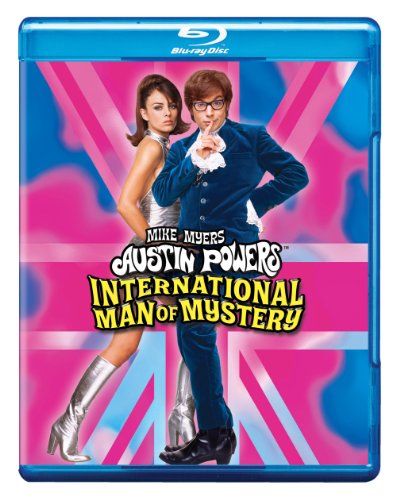 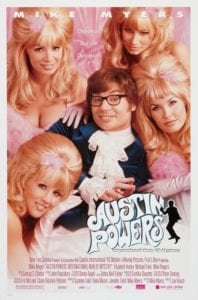 The year is 1967 and British super spy Austin Powers (Mike Myers) is stalking his evil nemesis Dr. Evil (Mike Myers). Austin, along with his side kick Mrs. Kensington (Mimi Rogers), infiltrate Dr. Evil’s lair in a swinging London nightclub. Unfortunately, Dr. Evil escapes in a space rocket shaped like a giant Bob’s Big Boy mascot and cryogenically freezes himself along with his feline constant companion, Mr. Bigglesworth. In response, Austin has himself placed into cryostasis in case Dr. Evil ever returns in the future to threaten the Earth.

Thirty years later in the year 1997, Dr. Evil returns to Earth to finish his evil plan to blackmail the countries of the world into giving him money. Upon his return, he executes his henchmen Mustafa (Will Ferrell) for mis-calibrating the freezing process that resulted in Mr. Bigglesworth losing all his hair. Dr. Evil also learns that his right hand man, Number 2 (Robert Wagner), has turned Dr. Evil’s empire into a very lucrative multibillion-dollar corporation called Virtucon. However, Dr. Evil is not interested in running a legitimate business and decides to steal nuclear weapons and demand that the world pay him $100 billion dollars to prevent their detonation. Dr. Evil is also not interested in his biological son, Scott Evil (Seth Green), who was created from Dr. Evil’s frozen sperm and raised in a test tube by Dr. Evil’s henchwoman, Frau Farbissina (Mindy Sterling). Scott is also resentful of his father’s absence and resists Dr. Evil’s half-assed attempts to bond with his estranged son.

With Dr. Evil’s return, the British Ministry of Defense orders that Austin Powers be revived and assigned to the investigation. Vanessa Kensington (Elizabeth Hurley), the grown daughter of Mrs. Kensington, is assigned to work with Austin and assist him in acclimating to the 1990’s. Vanessa and Austin head to Las Vegas, Nevada and pose as a married couple in order to gather information about Virtucon and Number 2. Number 2 is accompanied by his sexy Italian secretary, Alotta Fagina (Fabiana Udenio), whom Austin decides to press for information. Austin breaks into Alotta’s penthouse suite and photographs plans for a giant drill. When Alotta returns, Austin attempts to seduce her; however, Alotta plays along with the seduction so that she can find out more about Austin. She and Austin have sex with each other which displeases Vanessa, who finds herself falling for Austin despite his antiquated attitude.

Alotta reports to Dr. Evil that Austin is on to them. Frau reveals that she has a series of evil, assassin robots who look like beautiful, scantily clad, blonde women. The robots, called Fembots, are equipped with high caliber guns in their breasts. Dr. Evil also sends out two human assassins to kill Austin as well. The first, Paddy O’Brien (Paul Dillon), is unsuccessful and is killed when Austin drowns him in a toilet. The second, Random Task (Joe Son), captures Austin and Vanessa when they attempt to infiltrate Virtucon.

Austin and Vanessa are taken to Dr. Evil’s secret underground lair where the evil mastermind reveals that he intends to place the nuclear warhead into the large subterranean drill and send it to the core of the Earth. Once there, Dr. Evil plans to detonate the warhead causing all the volcanoes on Earth to erupt. The United Nations capitulate to Dr. Evil’s demands, but the evil madman tells Austin that he plans to detonate the warhead anyways. Dr. Evil places Austin and Vanessa into a death trap, but the two capable spies easily escape. Vanessa returns to the surface to get help while Austin stays in the lair to stop the bomb. While searching for Dr. Evil, Austin is confronted by the Fembots who gas Austin and attempt to subdue him. However, Austin seduces the Fembots with a comedic striptease that causes each of the Fembots to explode.

Vanessa and the British forces return to the underground lair to assist Austin. They join up with the sixties spy and begin their assault on Dr. Evil’s forces. Austin is able to abort the underground drill and then proceeds to chase after Dr. Evil to capture the madman once and for all. Alotta captures Vanessa, but Number 2 attempts to betray Dr. Evil by making a deal with Powers so that he can remain as the head of Virtucon. Dr. Evil uses a trap door to kill Number 2 in an underground fire pit. Dr. Evil also activates the base’s self-destruct device and then returns to orbit in his Big Boy rocket with Mr. Bigglesworth. Austin, Vanessa, and the British forces flee from the underground base and barely escape before the lair is destroyed.

After the mission, Austin and Vanessa marry. They are congratulated for a job well done by their supervisor Basil Exposition (Michael York) while they are on their honeymoon. Later, they are attacked by Random Task, but Austin fights off the assassin with a penis pump giving Vanessa the chance to knock him out with a bottle of champagne. The newlyweds adjourn to the balcony and look at the sky. In the sky floating in orbit around the Earth, a half frozen Dr. Evil vows his revenge on Austin.