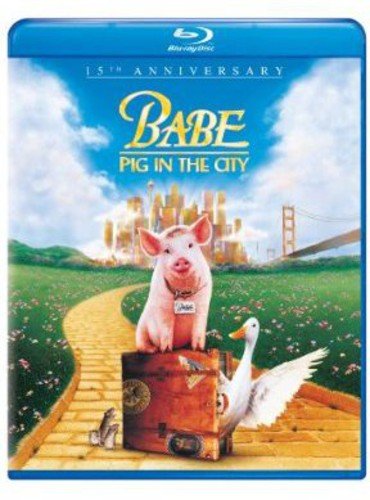 Babe: Pig in the City [Blu-ray]

Universal Studios Home Entertainment has announced they will bring Babe: Pig in the City to Blu-ray this Spring. The film is directed by George Miller and stars James Cromwell, E.G. Daily, Danny Mann, Magda Szubanski, and Mickey Rooney. Babe: Pig in the City will be available online and in stores beginning on May 7, 2013.

In the film, Babe (voiced by Daily), fresh from his victory in the sheep herding contest, returns to Farmer Hoggett’s farm. But when Farmer Hoggett (Cromwell) is injured and unable to work, Babe has to go to the big city to save his home. Accompanied by Ferdy (Mann) and Mrs. Hoggett (Szubanski), Babe sets out into a large city and, despite incredible obstacles, turns enemies into friends, raises enough money to save the farm and combines two worlds into one. Babe’s kind and steady heart once again achieves miracles in this fun-filled sequel to the original Babe.

Babe: Pig in the City was released in November of 1998 and grossed over $68 million in worldwide box office.

The Blu-ray release of the film will include a DTS-HD Master Audeo 5.1 surround track and My Scenes Bookmarking. No other additional extras are included.

Disclaimer: Affiliate links are contained in this post. This means when you click a link, and purchase an item, Movie House Memories will receive an affiliate commission. Advertisers and Affiliate Partnerships do not influence our content. See our Terms of Use about the inclusion of affiliate links on this site for more information.
March 6, 2013
1 minute read
Show More
Back to top button
Close
Close