In Mother Goose Land, Tom Piper is preparing to wed Mary Quite Contrary. On the eve of their wedding, evil miser Barnaby hires two henchmen to drown Tom and steal Mary’s sheep, cared for by Little Bo Peep, thus depriving Mary and the children she lives with of their livelihood, forcing her to marry Barnaby. The sheep are stolen, but Gonzorgo and Roderigo, Barnaby’s henchmen, double-cross him by selling Tom to a band of gypsies instead, leaving Tom with the opportunity to escape and make his way with Mary, Bo-Peep, and other Mother Goose characters to Toyland. 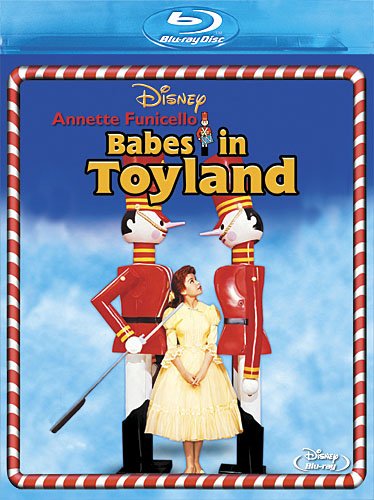 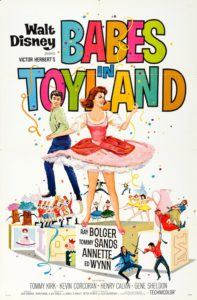 The film begins with an invitation from Mother Goose (Mary McCarty) and her friend, Sylvester the talking goose, to the wedding of Mary Quite Contrary (Annette Funicello) and Tom Piper (Tommy Sands). The whole town has come out for a song and dance to celebrate the occasion. However, the miserly and villainous Barnaby (Ray Bolger) plans to stop the wedding by kidnapping Tom so that he can marry Mary. He hires two dimwitted crooks for the job, Gonzorgo (Henry Calvin) and his silent companion Roderigo (Gene Sheldon).

The two men are to abduct Tom and throw him into the sea. Additionally, they are to steal Mary’s sheep. Barnaby theorizes that the loss of the sheep will deprive Mary of her only means of income so she will be forced to marry Barnaby for his support. Mary is unaware that she is the heir to a fortune, which Barnaby knows full well. Instead of drowning Tom, Gonzorgo and Roderigo decide to sell Tom to the Gypsies so that they can double their payment. After the sale, the two dimwits return to the town and tell Mary, Barnaby, and the citizens of Mother Goose Land that Tom has accidentally drowned. They show Mary a forged letter in which Tom tells Mary he is abandoning her, and she would be better off marrying Barnaby. A devastated and heartbroken Mary reluctantly accepts Barnaby’s sudden proposal.

Barnaby begins preparing for the wedding. He unwittingly hires the same Gypsies who have Tom to provide entertainment for the wedding. Tom disguises himself as the Gypsy Floretta and reveals himself to Mary when the time comes. An angry Barnaby pursues the frightened Gonzorgo and Roderigo over their double cross of him.

Despite Tom’s return, Mary’s sheep is still missing. One of the town’s children informs Mary of some sheep tracks leading into the Forest of No Children. The children sneak away into the forest to search for the missing sheep. The trees of the forest awaken and capture them. Tom and Mary follow the children into the forest to find them. They find the children and tell them stories about the live trees, although Tom and Mary see the trees as ordinary. The party camps for the night in the forest. In the morning, the trees once again come to life and capture the group. The trees explain to everyone that they are in the custody of the Toymaker of Toyland (Ed Wynn). Tom, Mary, and the children happily continue to Toyland, escorted by the trees.

Once they find the Toymaker’s house, they watch the Toymaker’s apprentice Grumio (Tommy Kirk) present a new machine that makes toys without any manual labor. The Toymaker is overjoyed, but in his excitement, he speeds up the machine to such a high rate that it explodes, destroying every toy in the factory. Tom, Mary, and the children offer to help make more toys in time for the Christmas holiday.

Unbeknownst to Tom and Mary, Barnaby has followed them to Toyland and has been spying on them. He takes the discarded shrinking gun and uses it to shrink the Toymaker and Tom. However, Barnaby’s henchmen abandon the villain when he threatens to shoot Tom a second time. As a punishment, Barnaby shoots Gonzorgo and Roderigo and locks them up with Tom in a birdcage. Barnaby forces Mary to marry him by threatening to destroy Tom. He also forces the Toymaker to preside over the ceremony.

The Toymaker tries to draw out the ceremony, which allows Gonzorgo and Roderigo to rescue Tom. The three of them sneak away and return with an army of toy soldiers to fight Barnaby. However, the villain easily defeats the toy soldiers and prepares to shoot Tom with another dose from the shrinking gun until Mary destroys the gun with a toy cannon. The liquid from the broken gun spills all over Barnaby and shrinks him to toy size. Now that they are both toy-sized, Tom challenges Barnaby to a duel with swords. During the duel, Tom stabs Barnaby who falls from a great height into an empty toybox.

A few days later, Tom and Mary are married in front of all the citizens of Mother Goose Village as well as the trees from the Forest of No Return. Everyone lives happily ever after.