In Back To The Future, Marty McFly is your typical ’80s American teenager. After his friend and mentor, Dr. Emmett Brown accidentally sends him back to 1955 in a plutonium-powered DeLorean time machine, things get heavy. Once there, Marty accidentally runs into his parents—interrupting the first time they met. Now, he must get his parents to meet, fall in love, and kiss at the Enchantment Under the Sea dance or never be born. Furthermore, Marty must do this by 10:04 p.m. next Saturday night when a bolt of lightning will strike the clock tower; generating the 1.21 gigawatts of power necessary to propel him back to the future! 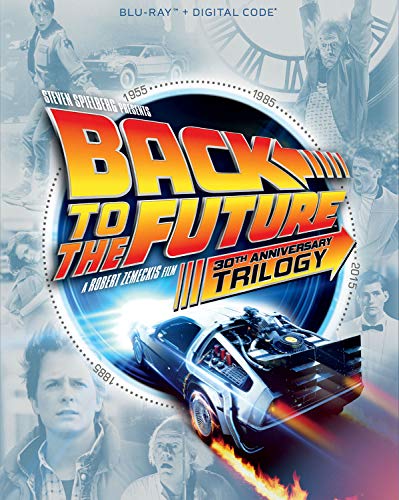 Back to the Future 30th Anniversary Trilogy [Blu-ray]

‘Back To The Future’ Movie Summary 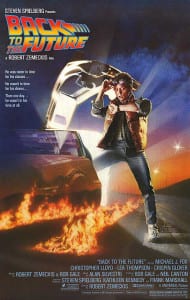 Back to the Future teenager Marty McFly assists local nutty scientist, Dr. Emmet Brown with his experiments. Dr. Brown asks Marty to meet him at the mall late that night. In the meantime, Marty’s hopes for a big date are crushed when his Dad, George, lends his car his boss, Biff, and Biff crashes it.

Biff is unapologetic about the car, and reminds George that George needs to finish Biff’s work for him. Marty’s Mom, Lorraine, is an overweight alcoholic who likes to talk about her chaste and mild teenage years while her aloof husband laughs at the TV.

Marty meets Doc Brown at the mall to help with an experiment. Doc built a time machine out of a DeLorean by stealing some plutonium from Libyan terrorists. When the Libyans show up and gun down Doc, Marty escapes in the time machine, hitting the magical 88 miles per hour and transporting himself back to the year 1955, thirty years in the past.

Marty goes to a diner to get a phone book and runs into his dad in 1955. His dad is a loser and a weirdo. He is picked on by Biff, much like 1985, and spends his free time peering at women through windows, which is how he was supposed to meet Lorraine. However, when George is peeping on a girl and falls from a tree, Marty pushes him out of the way of an oncoming car and is hit instead. Lorraine’s dad drove the car that hit Marty.

He does what anyone would do and strips Marty down to his draws and put him in his teenage daughter’s bed. Lorraine’s teenage self, not knowing that Marty is her son, is infatuated with him and puts the moves on heavily. Marty, knowing that Lorraine is his mom, is a little put off.

Marty finds Doc, and Doc won’t believe that Marty is from the future at first. But when they retrieve the time machine, Doc has no doubt, and they immediately plan to get Marty back to the future by using the energy from a bolt of lightning that will strike the clock tower in about a week. In the meantime, however, Marty has to get his mom to fall in love with his dad before it’s too late and Marty ceases to exist.

Marty tries to get his dad to ask Lorraine to the upcoming school dance, but George is too much of a wussy to get it done. When Biff hassles George out of jealousy over Lorraine, Marty stands up to him, and Lorraine becomes more enamored with Marty. Ultimately, Marty and George hatch a plan in which Marty will pretend to try to do the nasty with his mom, and George will save her.

In their car outside the school dance, Marty get cold feet, but his mom, with a little toddy in her, tries to do the nasty with Marty before noticing that kissing Marty is like kissing her brother. Biff interrupts them, and his henchmen take Marty out and lock him in the trunk of a car. With Marty out of the way, Biff forces himself on Lorraine. George breaks them up, thinking it was Marty in the car with Lorraine. But when George finds the courage to knock Biff’s block off, Lorraine falls in love, and Marty’s future is secure.

Marty and Doc manage to ride the lightening back to the future, where Marty finds that things have changed for himself. Doc took Marty’s advice and wore a bullet proof vest, saving his life from the Libyans. George, with the confidence that comes from breaking a man’s face, is a happy and active man with a budding science fiction writing career. Lorraine is thin and sober, apparently the benefits of not being married to a loser. And Marty has a brand new truck waiting for him in the garage.

The film ends as Doc appears, fresh off a trip thirty years into the future. He warns Marty and his girlfriend, who will become his wife, that he must rush to the future with them, since his kids will be in trouble. They pile into the DeLorean, which flies through the neighborhood up to 88 miles per hour and into the future.

Universal Pictures released Back To The Future to theaters on July 3, 1985. Robert Zemeckis directs the film which stars Michael J. Fox, Christopher Lloyd, and Lea Thompson.