The conclusion of the Back to the Future trilogy has Marty McFly on a rescue mission in 1885 to save Doc Brown from death at the hands of another member of the Tannen clan. However, a lack of gasoline for the time-traveling DeLorean, a Tannon’s gang of outlaws, and a schoolmarm with affections for a smitten Doc complicates the trip. 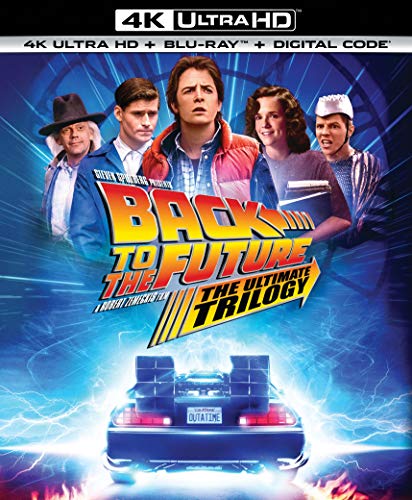 Back to the Future: The Ultimate Trilogy [4K Ultra HD]

‘Back to the Future Part III’ Movie Summary 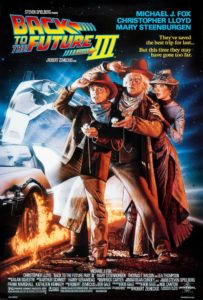 Back to the Future Part III opens where Part II left off—in 1955 just moments after Emmett “Doc” Brown (Christopher Lloyd) disappears in his DeLorean to parts unknown. Marty McFly (Michael J. Fox) learns that Doc was sent back to the year 1885 in a letter Doc wrote for him back then and had Western Union deliver it to Marty in 1955.

Marty goes to the 1955 version of Doc Brown for help tracking down and repair the DeLorean 1885 Doc hid the Delgado gold mine. Marty needs to quickly rescue him once he gets to 1885 himself because he finds a tombstone with Doc’s name and an the inscription stating that Biff Tannen’s (Thomas F. Wilson) great-grandfather, Buford “Mad Dog” Tannen (also Thomas F. Wilson) shot and killed Doc six days after writing the letter.

The two get the DeLorean working and Marty arrives in the middle of a cavalry pursuit of Native Americans. When Marty hides the DeLorean in a cave, a bear hanging out in it takes chase of Marty. As marty flees, he falls down a nearby hillside, crashes into a fence, and falls, knocking himself unconscious. He wakes to find himself in the care of his Irish-born ancestors Seamus (Michael J. Fox) and Maggie McFly (Lea Thompson).

In the morning, Marty wanders into Hill Valley, and quickly meets Buford and his minions at the Palace Saloon when Buford mistakes Marty for Seamus. Marty winds up angering Buford when he calls him Mad Dog so Buford tries to lynch Marty. Doc rescues him.

Marty tells Doc about his fate on the tombstone, so Doc agrees it’d be good to get out of Dodge. However, without gas, the DeLorean can’t hit 88 mph for some serious shit to happen. He decides to use a steam locomotive to push the DeLorean on the railroad tracks to accomplish that instead.

Doc and Marty inspect the incomplete rail line they plan to use to push the DeLorean, but Doc winds up saving the pretty new school teacher named Clara Clayton (Mary Steenburgen) from falling into the ravine. This ends up changing her death from the original timeline, but the two quickly fall in love.

Later when the town throws a little festival, Buford takes a shot at Doc, but Marty stops him. This pisses Buford off so he challenges Marty to a showdown in two days. Marty, not wanting to be a chicken (and also thinking that he and Doc would have left by then), accepts the challenge.

Doc warns Marty about hime being easily provoked and slips that Marty has a serious car accident in the future. Although Doc is hesitant to return to1985, he visits Clara to say goodbye to her. However, Doc’s story that he’s from the future insults her, and she just gets angry at him. This in turn depresses Doc, and he goes to throw the drunk and passes out at the saloon.

The day of Buford’s challenge to Marty arrives, and Marty refuses to fight to avoid certain death. Doc comes to and the boys try to leave, but Buford’s minions force Marty into a showdown at 8am when they capture Doc and threaten to kill him if he doesn’t come out in one minute.

Meanwhile,Clara’s heartbroken on a train headed for San Francisco. When she learns from another passenger Doc is equally heartbroken, she pulls the emergency brake cord which promptly stops the train. She then back towards Hill Valley.

Back in town, Buford’s minute is up, and Marty appears. As they get ready to duel, Marty drops his weapon and says he wants to settle this like men. Buford balks and shoots Marty in the chest, and Marty goes down. Buford walks over to what he thinks is a dead McFly, but is shocked to see Marty get up to reveal the steel door from the iron stove under his clothing which stopped the bullet. Marty knocks Buford out where he falls into a manure cart. To make matters worse for Buford, a deputy marshal arrives to Buford for robbing the Pine City Stage the day before.

Meanwhile, Clara is back to town, but finds Doc’s blacksmith shop deserted. However, she spots Doc’s model of the DeLorean with the words ‘time machine’ written on it. She then heads over to the stables, get a horse, and then starts heading towards the train.

When she catches up, she boards the locomotive and tries to climb to the DeLorean in front of her, but she falls when Doc’s special log blows. Her dress catches on the train which keeps her from plummeting to her death. Marty, who is in the DeLorean, gives Doc his hoverboard. He uses it to save Clara and the two steer clear from the locomotive as the DeLorean heads back to the future. The locomotive falls off the unfinished bridge and to its destruction.

Marty returns to 1985, barely escaping the now powerless DeLorean as an oncoming freight train barrels through it. He then goes to find his girlfriend, Jennifer (Elisabeth Shue), still sleeping on the porch where he left her in the previous film. The two go for a ride to see everything is back to normal from the mess Biff made it into in Part II.

As the two come to a stop at a light in Marty’s Toyota 4×4, his classmate, Needles (Flea), pulls up beside him and challenges him to a drag race. Marty’s no chicken, but he heeds Doc’s warning about getting into an accident that changes his future forever. As the light turns green, Marty throws his truck into reverse and Needles speeds off. Needles narrowly misses a a white Rolls-Royce that pops out of a side street. Realizing that they just avoided disaster, Jennifer opens the fax message she kept from 2015. The text that said, “YOU’RE FIRED!!!” fades away.

Marty and Jennifer return to the wreckage of the DeLorean, and as they look at the mess, the grade crossing activates even though no train is in sight. Suddenly a bright light blasts in front of them and they are blown back as a vintage steam-engine appears with Doc behind the helm. He introduces the two to Clara and their sons: Jules (Todd Cameron Brown) and Verne (Dannel Evans). Doc has returned for his dog, Einstein, and to let Marty know he’s doing just fine.

He gives Marty a photo of them standing next to the town clock taken at its dedication in 1885 as a keepsake. Jennifer tells Doc about the fax she had from the future, and he explains that their future is now theirs to make of it what they will.

The two watch as Doc and his family leave one more time. The steam engine’s wheels fold underneath it as it becomes this hover train thingy. It rises into the air, circles around, and flies at the camera as it hits 88mph.