The danger starts when a beautiful brunette hands American Joe Barton some securities for safekeeping. The brunette turns up dead, the securities turn out to be explosive intel and Joe is #1 on the Most Wanted list of both Nazi henchmen and Soviet spies. (Courtesy of Warner Bros. Pictures) 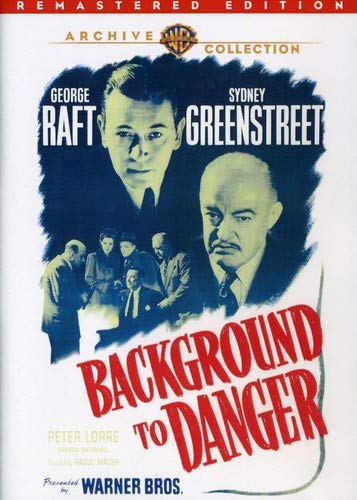 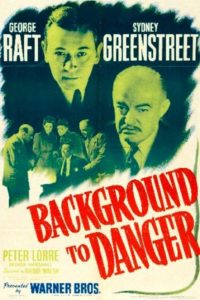 With World War II raging around the globe, Nazi Germany stages an assassination attempt on its own ambassador in Turkey, Franz von Papen (Curt Furberg). The plan is to frame Russian agents on his death and bring the neutral country into the war as its ally. However, von Papen survives, and the Russians that Colonel Robinson (Sydney Greenstreet) was trying to frame for the attempt have solid alibis. This exonerates Germany’s enemies from any wrong doing and forces Robinson to switch gears to provoke the confrontation between Turkey and Russia.

We next meet an American “machinery salesman” named Joe Barton (George Raft) as he boards the Baghdad-Istanbul Express at Aleppo. As the porter leads him to his seat, he spots an attractive passenger named Ana Remzi (Osa Massen), and bribes the porter to seat him with the woman.

Barton strikes up a conversation with Ana and finds that she’s afraid that someone not only followed her onto the train, but that customs agents will search her once they cross the border. She says she’s has a bunch of securities in an envelope which is all she has left after her father and brother were killed. She’s worried the Turks will take the envelope from her. She asks Barton to hold it for her because she knows they won’t search an American.

Barton agrees to her request, and after customs does her, she asks him to hold the envelope until after they stop in Ankara. Once again, Barton agrees. However, Barton’s curiosity is piqued, and when he later examines the envelope, he finds what appears to be plans for a Russian invasion of Turkey.

Once in Ankara, Ana calls Barton so they can meet at her hotel, but when he arrives, he finds someone fatally stabbed her in the back. He hears someone approach the room and hides. Soviet agent, Nikolai Zaleshoff (Peter Lorre),walks in and immediately searches Ana’s luggage. Barton tries to leave through the front door, but hears someone approaching and must flee out the window. As he leaves, a woman standing by a gate, Tamara Zaleshoff (Brenda Marshall), flashes a light in Barton’s face, revealing themselves to one another.

Once back at his hotel, the Turkish police arrive to question Barton. He hides the envelope under a desk before letting them in. Turns out these men are actually German agents working for Colonel Robinson, and they take Barton to meet him. There, Robinson tells Barton that Ana was a spy and he demands the maps she gave him. Barton refuses to cooperate.

Robinson then turns Barton over to his chief interrogator, Mailler (Kurt Katch), to get the information for the map’s location out of him. However, before Mailler and his two cronies can inflict any real harm on Barton, Nikolai shows up and saves him. Robinson then calls in an anonymous tip to the police that Barton killed Ana.

Nikolai takes barton back to his place where Barton officially meets Tamara. The two are a brother / sister spy team working for the Soviets (who knows if they are really related). Nikolai want to question Barton, but he’s really just stalling while his other partner, Igor Rashenko (Daniel Ocko)—the man who was following Ana on the train and later killed her in her hotel room—searches Barton’s hotel room for the envelope. Barton cuts the chat short and returns to his hotel room only to find it ransacked and the envelope gone.

Now on the lam from police, Barton heads to a smoke shop which is a front for the U.S. government’s spy agency. Turns out that Barton is also really an agent, and he needs help. His boss, McNamara (Willard Robertson), assigns him a local turk named Hassan (Turhan Bey) to help him with the investigation now that Barton’s a wanted man.

The two men take a train to Istanbul where they have tracked Nikolai, Tamara, and Rashenko. They have followed Robinson there because he’s bribed a newspaper publisher to print an article claiming that the documents from the envelope are a secret Russian plan to invade Turkey.

Barton heads to Robinson’s luxurious villa where he has Hassan wait in a car down the road while he goes looking for clues. Inside, Barton finds Rashenko dead in a chair in Robinson’s study. As he examines the dead body, Robinson walks in from behind with a gun and captures him.

Robinson tells him that his men killed Hassan back in the car, and it would be a shame to kill him too. He thinks Barton would be useful for the Nazi cause and asks him to join. Barton says sure as Mailler and a goon walks in with Nikolai and Tamara at gun point. (Robinson’s men actually got the envelope before Rashenko could search Barton’s room.) Robinson orders him to prove his new allegiance by killing Nikolai. Barton says he will do it and Robinson hands him a gun. Barton pulls the trigger, but the gun doesn’t have bullets in it.

Robinson must now leave to meet with the Turkish newspaper and he orders Mailler to kill everyone—he never really wanted Barton on his team. Once he leaves, Barton manages to get the better of Mailler and take his gun while Mailler’s goon shoots and kills Nikolai. Barton kills the goon before he and Tamara get away. A car chase ensues—only ending when Barton shoots and kills the driver. The car flips out of control, killing Mailler and the other goons inside.

The two then head to the newspaper where Barton tells Tamara to wait in the car. Once inside, Barton destroys the print for the fake news story of Russia’s “invasion” plans. He then goes to the office where Robinson is sitting and holds him at gunpoint. He forces Robinson to burn the maps and hand over an incriminating letter implicating the newspaper editor for his part in the plan.

Barton and Tamara then head to Cairo for their next assignment where they will work together for their respective countries.