The Bad Boys are back! Miami police detectives Mike Lowrey and Marcus Burnett are a little older, and theoretically, a little wiser. Marcus is looking to hang up his badge and gun and retire. Mike wants to continue to live the fast lifestyle that has defined his existence. When Mike is nearly killed by a mysterious assassin, the bad boys go on an all-out mission against a mother-and-son drug lords who have an unknown personal vendetta against Mike. 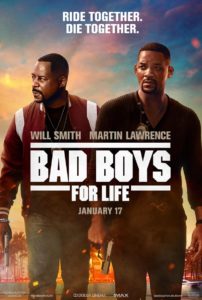 In Mexico, Isabel Aretas (Kate del Castillo), wife of deceased cartel kingpin Benito Aretas, escapes from prison with the assistance of her son Armando (Jacob Scipio). Once free, Isabel sends her son to Miami to retrieve a stash of money hidden by her husband prior to his death. She also tasks him with killing several people that she holds responsible for her incarceration and the death of her husband. She gives Armando the specific instructions that Miami detective Mike Lowrey (Will Smith) is to be killed last.

Meanwhile in Miami, Mike accompanies his partner Marcus Burnett (Martin Lawrence) to the birth of his first grandson. While he in route, Marcus tells his friend that he intends to retire so that he can spend more time with his family. Mike is displeased with the thought of Marcus retiring since he believed that they would always be partners. The two attend a celebration to honor the birth of Marcus’ grandson and Mike is shot by Armando on the street outside the bar. Mike ends up in a coma for six months. Isabel is angered by Mike’s shooting since she instructed her son to kill him last, but Armando continues to kill other people while Mike is in a coma.

After Mike wakes from his coma, he is determined to find the man who shot him. He tries to lure Marcus out of retirement for one last ride, but Marcus refuses and tries to convince Mike to retire as well. Mike is angry that his friend will not support his revenge quest, and they have a falling out. Mike begins his own investigation and obtains the identity of arms dealer Booker Grassie (Rory Markham). Captain Conrad Howard (Joe Pantoliano), Mike’s commanding officer, learns of Mike’s rogue mission and realizes that he will not be able to control Mike. Instead, he reluctantly allows Mike to work with the Advanced Miami Metro Operations (AMMO) team, the group in charge of the investigation. AMMO is led by Mike’s ex-girlfriend Lieutenant Rita Seceda (Paola Nuñez), who is not keen in allowing Mike to be a part of her investigation.

The AMMO team surveils Grassie as he participates in an arms deal. However, Mike determines that the buyers intend to kill Grassie and blows the surveillance in a failed attempt to save Grassie. Soon after, Marcus receives a call from an old informant named Carver Remy (Ivo Nandi) who believes that the assassin is after him. Marcus contacts Mike and the two estranged friends go to Carver’s hotel to talk to him. They find Carver dead, but Armando is still present. Armando and Mike get into a fistfight, but the assassin escapes.

Captain Howard meets with Mike and tells him that he should get out of the investigation. Howard also tells Mike that he is intending on retiring himself and offers advice to Mike to find a life outside of law enforcement. However, Howard is shot by Armando with a high-powered rifle moments later and dies. Howard’s death causes Marcus to come out of retirement to help his friend, but Marcus intends to cooperate with AMMO fully and not act like a “bad boy”.

The AMMO team tracks down Grassie’s accountant who leads the investigative team to Lorenzo “Zway-Lo” Rodriguez (Nicky Jam). The team goes undercover to infiltrate the gangster’s birthday party at a local bar. Things go south and the team ends up in a high-speed car chase. Armando arrives in a helicopter to rescue Zway-Lo but kills him instead when he blocks Armando’s ability to shoot Mike. Mike climbs onto the helicopter, and Armando has him dead to rights. The assassin tells Mike “hasta el fuego”, which causes Mike to pause in his pursuit. Marcus shoots at the helicopter and creates enough of a distraction for Mike to drop safely into the water below.

Due to the failed operation and vast destruction of property, AMMO is shut down. In private, Mike tells Marcus that Armando may be his son. Mike reveals that before partnering with Marcus, he used to work undercover in the Aretas cartel where he met Isabel. Mike confesses to falling in love with Isabel and beginning a relationship with her. The couple planned on running off together. However, when Isabel did not want to give up the drug cartel lifestyle, Mike remained loyal to the police. Mike reveals that they used “hasta el fuego” as a made-up secret phrase. Mike makes a plan to confront Isabel in Mexico City. Marcus and AMMO agree to join him despite his opposition.

Once in Mexico City, Mike proceeds to the Hidalgo Palace, backed up by Marcus and the AMMO team. Mike confronts Isabel and tells her that she should have told her son the truth about his father. AMMO loses communications, and they realize that Isabel is on to them. AMMO and Isabel’s men engage in a shootout. Marcus shoots the pilot of Isabel’s escape helicopter, causing it to crash into the lobby of the palace. The crash starts a fire. Marcus takes on Isabel while Mike confronts his son.

Mike tries to tell Armando the truth, but the assassin continues to beat Mike up. Mike offers no resistance. Mike’s sincerity eventually breaks through Armando’s anger. He confronts his mother and demands the truth. Isabel confirms that Mike is his father. Armando realizes that his mission and most of his life has been based on lies. Armando moves to protect his father, leading to Isabel inadvertently shooting him in the chest. Distraught over the apparent death of her son by her own hand, Isabel moves to kill Mike, but Rita intervenes and shoots Isabel. Isabel is sent falling into the fire by the blast and is killed. Marcus almost falls into the fire himself, but he is pulled to safety by Mike and Armando, who is still alive.

Sometime later, Rita receives a promotion to police captain to replace Howard. Mike and the un-retired Marcus are placed in charge of the AMMO team. Mike visits his son in prison, who tells his father that he has a price to pay for his past crimes. Mike offers him a chance to earn some redemption by taking on special assignments, which Armando accepts.