Thirteen years after the first film, Willie Soke still remains depressed as ever. He is addicted to sex and alcohol, but with little going for him he tries to kill himself, until he is visited by Thurman Merman, the strange little boy who has now grown to adulthood. Thurman brings Willie a package of money from the conman’s former partner, Marcus. Soon, Willie heads to Chicago to work on a new job with Marcus and Willie’s mother Sunny. The plan, rob a charity of millions of dollars prior to Christmas. The problem, Willie has to work with the two people he trusts least in the world, his mother and Marcus. To make matters worse, Willie has to strap on the Santa Claus outfit once again, something that always brings out the worst in him. 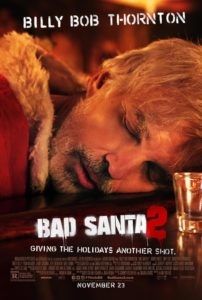 Thirteen years after the events of the first Bad Santa, Willie Soke (Billy Bob Thornton) is still as depressed as ever. His relationship with Sue (Lauren Graham) having failed years before, Willie has returned to his usual vices, sex and alcohol. Finding no joy in his lifestyle, Willie tries to kill himself and fails after the untimely arrival of an adult Thurman Merman (Brett Kelly). Thurman works at a sandwich and the death of his grandmother and estrangement from his own father has caused him to become closer to Willie. Thurman delivers a mysterious package to Willie that contains a large sum of cash. Willie discovers that the package is from Marcus (Tony Cox) who has been released from prison after 13 years. Marcus expresses some regret for betraying and trying to kill Willie years before. Marcus tells Willie that he has an opportunity to do a job in Chicago that could be worth millions to them. Marcus does not disclose his contact in Chicago which makes Willie apprehensive. However, Willie agrees to commit the job and leaves for Chicago right after he unsuccessfully tries to help Thurman lose his virginity to Opal (Octavia Spencer), a local prostitute.

Once in Chicago, Willie is dismayed to learn that the target of their con is a charitable organization, but he is furious to learn that Marcus’ contact in the Windy City is Willie’s mother Sunny (Kathy Bates). Willie and Sunny don’t have a close relationship, and Willie threatens to return to Arizona. But when Willie learns that Sunny is suffering from the early stages of Parkinson’s disease, he agrees to go forward with the job. Willie secretly makes a deal with Marcus to cut Sunny out when the time comes.

Willie is unhappy to learn that he once again has to don the Santa Claus outfit to stand on street corners with a charity bucket with Marcus dressed as elf at his side. This time, Sunny joins them dressed as Mrs. Claus. Willie almost immediately gets into trouble when he beats up a rival Santa (Mike Starr) who he mistakenly believes is a pedophile. Willie is bailed out of jail by one of charity’s founders, the beautiful Diane (Christina Hendricks). Diane is angry with Willie and threatens to fire him, but agrees to allow him to continue to work for the organization as long as he attends Alcoholics Anonymous meetings with her. Diane’s wealthy husband, Regent (Ryan Hansen), also works at the charity and is cheating on Diane with his secretary. Nevertheless, Regent does not like nor trust Willie and orders his head security guard Dorfman (Jeff Skowron) to track and follow Willie.

Meanwhile, Marcus attempts to do some recon work about the charity’s safe and tries to seduce another security guard named Gina (Jenny Zigrino) so that he can obtain the keys to Regent’s office. However, Marcus’ seduction technique fails as Gina is a high maintenance girl. At the same time, Willie begins having dirty sex with Diane behind Regent’s back. Willie also starts to bond with his mother when the two of them rob a mansion together while posing as Santa and Mrs. Claus. As they bond after the robbery, Sunny gives Willie a gun so he can betray and take revenge on Marcus. Willie tells his mother that Marcus has changed.

Meanwhile, Thurman arrives in a wintry Chicago in his polo shirt and shorts, having followed Willie to the Windy City. Willie tries to leave him at a laundromat, but his guilt gets the better of him, so he takes him to the men’s shelter at the charity. While there, Thurman joins the children’s choir once it is discovered that he has a beautiful singing voice. Thurman asks Willie to come watch him at the Christmas concert which is set the same night of Willie, Sunny, and Marcus’ planned heist. Sunny urges Willie to seduce Gina after Marcus’ failure so that they can acquire the keys. Willie ends up having sex with her in the bathroom of a bar and obtains the keys.

On the night of the robbery, Willie watches Thurman singing, which makes the young man extremely happy. Afterwards, Willie cracks the safe and steals the money. He and Marcus escape just as Regent and Dorfman discover their identities and the threat to the money. Once out of the building, Marcus betrays Willie again. Sunny reveals that she is betraying both of them, and tells Willie that she placed blanks in the gun that she gave him. Sunny shoots Marcus and tries to escape into a crowd of people dressed as Santa at an outdoor party. Willie, Regent, and Dorfman chase after her. Willie spots her in the crowd and tries to take the money back for the kids and ends up getting shot. The bag tears open and the money goes flying into the crowd. Sunny turns to shoot Willie a second time, but ends up hitting Thurman in his butt. Willie and Sunny are both arrested by the police, but Willie is not charged due to his help in catching Sunny. While he recovers, he is visited in the hospital by Diane who wakes him up with a hand job.

After being released from the hospital, Willie takes a job as a janitor at the charity. He continues to visit Thurman and acknowledges the odd man as his family. Willie also visits the injured Marcus who is still recuperating in the hospital. While Marcus sleeps, Willie proceeds to “tea bag” him and posts the pictures on Instagram as revenge.