The origins of Batman are told once again and in greater detail. Bruce Wayne’s parents are killed when he is a young child. Once he becomes an adult, the billionaire begins to travel the world in his quest against crime. He joins the League of Shadows to develop his skills and becomes the fighting machine that he needs to become to stop crime. However, when he learns that the League wants to destroy Gotham City, Bruce leaves the League and returns to the city of his birth and becomes the legend known as Batman. 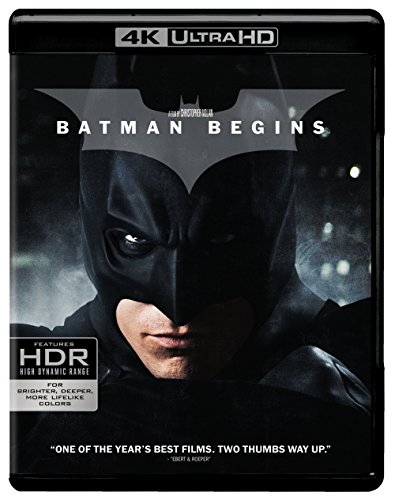 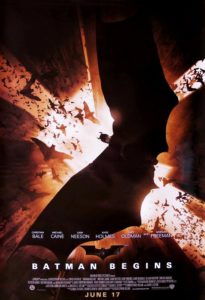 Bruce Wayne (Gus Lewis) is the son of wealthy physician Thomas Wayne (Linus Roache) and his wife Martha (Sara Stewart). The family lives on the edge of Gotham City, a metropolis that is riddled with crime and poverty. As the film opens, Bruce falls down a dry well and is attacked by a swarm of bats. Bruce is saved by his father, but he develops a fear of bats as a result of the incident. Thomas teaches his son that it is important to learn from our mistakes. Soon after, the family attends an opera together. Bruce becomes frightened by some of the performers who are dressed as bats and asks to leave. Outside in the alley of the theater, the Wayne family is approached by mugger Joe Chill (Richard Brake) who murders Bruce’s parents in front of him. Before dying, Thomas tells his son to not be afraid. The orphaned Bruce is raised by the family butler, Alfred Pennyworth (Michael Caine), who becomes the boy’s guardian.

Fourteen years past and Bruce Wayne (Christian Bale) is still haunted by the death of his parents. Bruce formulates a plan to murder Joe Chill after the murderer is paroled after cutting a deal with the government and testifying against mafia boss Carmine Falcone (Tom Wilkinson). However, Chill is killed by one of Falcone’s hitmen before Bruce can follow through with his plans. Bruce’s childhood friend Rachel Dawes (Katie Holmes) learns of Bruce’s homicidal plan and lectures him for acting outside the justice system, saying that his father would be ashamed of him.

A despondent Bruce confronts Falcone, who tells him that real power comes from being feared. Bruce gives up his life and disappears into the underworld to fight crime from within. He spends the next seven years traveling the world and training in combat. While in a Bhutan prison, Bruce meets Henri Ducard (Liam Neeson), who recruits him to join the League of Shadows led by Ra’s al Ghul (Ken Watanabe). After Bruce completes his lengthy training in ninja methods and learns to completely purge his fears, the future Dark Knight learns that the League plans to destroy Gotham City, believing that it has become so corrupt and crime ridden that it cannot be saved. Bruce rejects the League and its belief that killing is necessary. Bruce fights League members and burns down their temple during his escape. Ra’s is killed by falling debris, but Bruce saves an unconscious Ducard.

Bruce returns to Gotham with his plan to fight crime. Upon his return, he takes an interest in his family’s company, Wayne Enterprises, which is being taken public by the acting CEO William Earle (Rutger Hauer). He meets with the company archivist Lucius Fox (Morgan Freeman), a friend of Bruce’s father. Lucius allows Bruce to have access to various defense technology projects, including a protective bodysuit and a heavily armored vehicle called the Tumbler. In public, Bruce plays the role of playboy, cavorting with models and living to excess. Secretly, Bruce sets up a secret base of operations beneath Wayne Manor and takes on the secret identity of Batman. The visage of the bat inspired by his own childhood fear of bats.

As Batman, Bruce intercepts a drug shipment and subdues several criminals, including Falcone himself. He provides the evidence to Rachel and enlists the help of one of the Gotham’s few honest cops, Sergeant James Gordon (Gary Oldman). Falcone’s attorney convinces the court that Falcone needs to be held at Arkham Asylum to receive treatment from Dr. Jonathan Crane (Cillian Murphy). Dr. Crane is a League of Shadows agent who is secretly the Scarecrow and sprays Falcone with his fear-inducing hallucinogen. Batman investigates Scarecrow and is sprayed with the hallucinogen as well. Only the timely assistance of both Alfred and Lucius saves Bruce. Lucius concocts an antidote to the hallucinogen.

Rachel works as one of the city’s assistant district attorneys. She begins to suspect Crane of corruption and goes to Arkham to investigate his treatment of the allegedly mentally ill Falcone. Crane brings her to the basement of the asylum where he is introducing his fear-inducing hallucinogen into the city’s water supply. He overdoses Rachel with the gas just as Batman arrives at the facility to save her. Batman sprays Crane with his own chemical and begins to question him. Crane claims that he is working for Ra’s al Ghul. Batman takes Rachel and evades the police by using a large horde of bats and his new Tumbler Batmobile. Batman takes Rachel back to the Batcave and administers her the antidote. He gives her two vials and tells her to give one to Gordon and to use the other for mass production.

Immediately following, Bruce attends a birthday party at Wayne Manor to maintain his playboy reputation. At the party, Ducard reappears and reveals himself to be the true Ra’s al Ghul. Ra’s reveals that he plans to use a stolen Wayne Industries’ microwave emitter to vaporize Gotham’s water supply and aerosolize Scarecrow’s hallucinogen. The resulting gas will cause mass hysteria and an immense loss of human life. Bruce promises to stop him, but Bruce is knocked unconscious by Ra’s and his men before they set fire to Wayne Manor. Alfred rescues Bruce before he is killed in the fire.

Ra’s and his men travel to the Narrows in Gotham City and load the microwave emitter onto Gotham’s monorail. Bruce returns to Gotham as Batman and saves Rachel and a young boy from a drugged mob. Rachel asks Batman who he is, and Bruce gives her a hint which she figures out before Bruce leaps off a ledge to stop Ra’s. Batman catches up with Ra’s as he travels on the monorail towards Wayne Tower where the main hub of the water supply system is kept. At the same time, Gordon uses the Tumbler to travel to Wayne Tower and then uses the new Batmobile’s cannons to destroy a section of the track just short of the skyscraper. Above, Batman battles Ra’s in the monorail to keep him distracted from the danger ahead. Batman refuses to kill Ra’s, but the Dark Knight breaks the windows and leaps to safety just before the monorail crashes into the ground below after the track ends. Gotham is saved and Ra’s dies.

In the aftermath, Bruce, Alfred, and Rachel sift through the ashes of Wayne Manor. Bruce and Alfred make plans to rebuild and improve Bruce’s ancestral home. Bruce hints at his feelings towards Rachel who has gained a sense of respect and love for her former childhood friend. However, Rachel states that she cannot be with Bruce until Gotham no longer needs Batman. At Wayne Enterprises, Bruce repurchases a controlling stake in his family’s company, firing Earle as CEO and replacing him with Lucius.

Batman becomes a public figure which drives fear into the hearts and minds of the criminal underworld. He creates a bat signal for the newly promoted Gordon and the police to use when they need to summon him. Gordon informs Batman that his presence has inspired a new class of criminal and shows Batman some Joker playing cards that a new theatrical criminal has been leaving at various bank robberies. Batman promises to investigate and disappears into the night.