Jim Carrey stars as criminal genius, The Riddler, and Tommy Lee Jones plays Two-Face. Together, these criminal kingpins present a threat that only the Dynamic Duo–Batman (Val Kilmer) and Robin (Chris O’Donnell)–can stop. And Academy Award winner Nicole Kidman comes to Gotham as the alluring Dr. Chase Meridian, who may steal the heart of Batman Forever. Based upon Batman characters created by Bob Kane and published by DC Comics. (Courtesy of Warner Bros. Pictures) 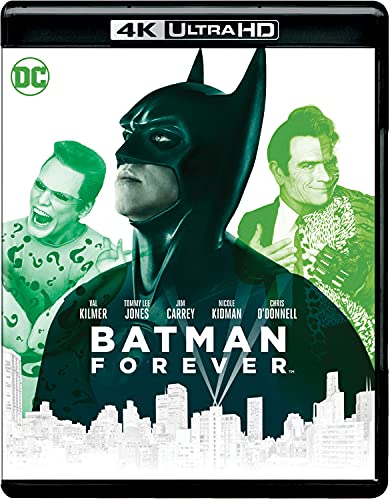 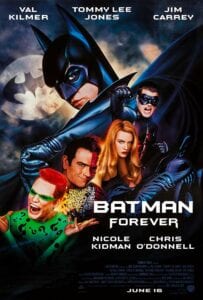 Batman Forever takes place in the metropolis known as Gotham where we find the memories of Bruce’s parent’s death still haunt him. Batman soon finds himself in a confrontation with the criminal mastermind know as Two-Face to some and the former district attorney, Harvey Dent, to others. Two-Face has some hostages which Batman frees. Unfortunately, our villain escapes.

We next meet Edward Nygma, a researcher at Wayne Enterprises with a man crush on Bruce Wayne. He’s recently invented a little machine that can beam data through a television and into an unsuspecting person’s brain. When he shows the device to Bruce, he’s less than thrilled about it. Bruce rejects him outright for creating something he considers to be used for mind manipulation. So, Nygma kills his supervisor, and makes it look like a suicide. He then quits, and heads out where he sends Bruce riddling messages.

Next up is the beautiful Chase Meridian, a psychiatrist obsessed with both the bat man and the Bruce man. Bruce meets and falls for the doctor before inviting her to the Charity Circus. After The Flying Graysons’ stellar performance there, Two-Face arrives to spoil the festivities. He says he’s going to blow that circus up if Batman doesn’t come forward and surrender. The Flying Graysons try to intervene, but Two-Face kills most of them. Only their youngest flyer, Dick Grayson, survives after he climbs to the roof and throws Two-Face’s bomb into a river. Now Dick wants revenge on Two-Face.

Bruce invites Dick to stay at Wayne Manor, and he eventually learns of Bruce’s other identity. He takes the Batmobile for a batspin around town that interrupts some sexy time between Bruce and Chase. Dick is now more than ever hell-bent on killing Two-Face, and he wants Batman’s help. Bruce refuses, but his butler, Alfred, reminds Bruce that once he was like that too.

By now, Two-Face has caught Nygma’s attention, and he rebrands himself into the Riddler before joining forces with Mr. Face. The boys steal a bunch of money to finance the mass production Nygma’s brainwave device. Using it under the name of the Riddler, he intends to steal all of Gotham’s confidential information, including Batman’s secret identity.

Bruce has fallen head over heels in love with Chase, and he decides to put his superhero days behind him to spend time with her…and to keep Dick from killing Two-Face. After Dick runs off, Bruce reveals his real identity to Chase during dinner. However, the Riddler and Two-Face show up, and attack Wayne Manor. The Riddler destroys the Batcave while Two-Face shoots Bruce and kidnaps Chase. On their way out, the Riddler leaves him another riddle because that’s what he does.

Using his clues, Bruce and Alfred figure out the Riddler’s secret identity while Chase sits as a prisoner at the Riddler and Two-Face’s hideout. Bruce dusts off his new Batman outfit while Dick returns to become Robin. The boys head out to Claw Island where our villain’s hideout is secretly located.

The two are quickly separated, and Robin is nearly able to take out Two-Face, but he winds up captured. The Riddler reveals Chase and Robin to Batman where he finds them bound and gagged with duct tape. He’s given a choice to save only one of them, but instead, Batman destroys the Riddler’s brainwave machine with one of his wonderful toys called a Batarang. This causes the Riddler to mentally breakdown, and lose his sanity. Batman escapes with both Robin and Chase in tow.

Two-Face catches up, and he decides to let the flip of a coin determine the three’s fate, but Batman is one rich dude, and he tosses a bunch of identical coins into the air which confuses the hell out of Two-Face. He stumbles, and falls to his death while Robin looks on.

They take the Riddler to the Arkham Asylum to commit him. The Riddler claims that he is actually Batman, but everyone only believes him to be bat-shit crazy. Chase meets with Bruce one last time outside the asylum, and tells him that no one will ever know his true identity. She leaves Gotham; never to see Bruce again. Batman and Robin are now a dynamic duo out to protect the good people of Gotham from evil wherever it may lurk.