In this stylish animated film, Batman battles a dangerous new foe who is trying to frame the Dark Knight for the murder of a crime lord–and who is mysteriously linked to Bruce Wayne’s former girlfriend. (Courtesy Warner Bros. Pictures) 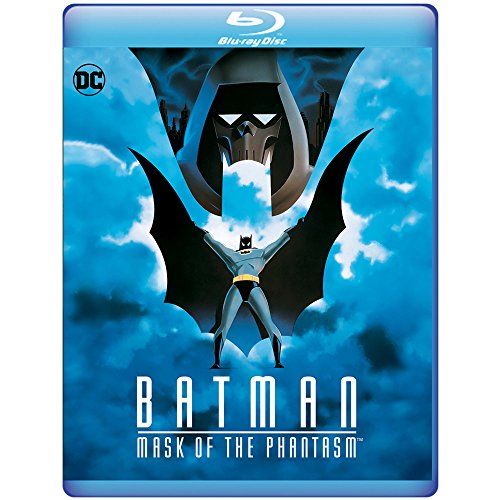 Batman: Mask of the Phantasm [Blu-ray]

A twenty-something Bruce Wayne (Kevin Conroy) meets Andrea Beaumont (Dana Delany) at the cemetery where his parents and her mother were laid to rest, and the two strike up an unexpected romance. This is during the time in Bruce’s life when he begins his jump to his crime-fighting alter-ego, Batman. While Bruce successfully foils these criminal’s plans, he’s a bit discouraged his mere presence doesn’t fear among in the crooks.

Bruce’s unexpected happiness with Andrea causes great conflict within—on the one hand he made a promise to his parents that he’d defend Gotham City to avenge them. One the other, his parents would want their son happy and he could always pay the city for more police. Eventually, Bruce’s heart wins and he asks Andrea to marry him. While she quickly accepts, the next day, she sends the engagement ring back with a Dear John letter asking Bruce to forget her. She has already left town with her father, Carl Beaumont (Stacy Keach), to parts unknown. While this breaks Bruce’s heart, he doubles down on fighting crime and becomes Batman.

We next see an older, more seasoned Batman at work. When he barges in on mobster Chuckie Sol (Dick Miller) and his cronies, a fight breaks out. Chuckie escapes to a parking garage only to come across a cloaked Phantasm. While evading him, Chuckie speeds through a garage barrier and crashes into the next building, killing himself immediately. Witnesses see Batman lookout to the crash from above and believe he’s the one responsible for Chuckie’s death. The corrupt councilman Arthur Reeves (Hart Bochner)—who’s on the mob’s payroll—vows to bring Batman to justice.

Soon after, Chuckie’s partner in crime, Buzz Bronski (John P. Ryan), pays his disrespects to Chuckie after he’s been laid to rest (incidentally, it’s the same cemetery Bruce met Andrea). As Bronski’s bodyguards wait by the car, the Phantasm shows up and kills Bronski. The bodyguards hear his pleas for help only to find Bronski dead and a cloaked figure fleeing the scene. From behind, Phantasm looks similar to Batman and the bodyguards report Batman as Bronski’s killer.

When Batman goes to investigates Bronski’s death at the cemetery, he stops to pay his respects at his parents’ grave. Andrea, who has returned to town for the first time in many years, is also there visiting her mother’s grave. She spots Batman who runs off when he recognizes her. When she sees Batman was at the Wayne plot, she puts two and two together—her long lost love and Batman are one in the same.

Meanwhile, an elderly Sal Valestra (Abe Vigoda), who is the mob’s ring leader, hears the news of another of his men’s deaths. He freaks out because Batman might target him next and goes to Reeves for help. Reeves kicks him to the curb so Valestra tracks down The Joker (Mark Hamill) and asks him for help which the Joker agrees to do.

While this goes on, Batman heads to Valestra’s mansion where he finds a photograph that links Carl Beaumont to Sal, Bronski, and Chuckie. He finds Andrea where the two meet face to face for the first time in 10 years. While she knows Batman is her Bruce, she’s cold to him and tells him to leave. Once gone, Andrea breaks down in tears on her bed.

Soon after, Phantasm goes to kill Valestra at his mansion, but finds the Joker’s already killed him and put a camera in his lap to catch Batman in the act trying to kill Valestra. When he sees Phantasm, he realizes there’s another killer out there and detonates a bomb to take out Phantasm.

Elsewhere in Gotham, the police are still in hot pursuit of Batman, and when they eventually spot him, they order all their officers to hunt him down. When all seems lost, Andrea shows up in her car to drive him off to safety. Back at the Batcave, she tells Bruce her father embezzled money from Valestra which caused the two to go into hiding. While he eventually repaid everything, that wasn’t enough for the mob. They put a hit out on her father. With all that behind them, it looks as if the two will resume their relationship.

This story makes Bruce believe Carl is the Phantasm out for revenge, but when he looks at the photograph he took from Valestra’s home again, he notices one of Valestra’s men in the picture is none other than the Joker. Could it be the Joker is killing Valestra’s mob in order to hide his ties to them?

Joker next pays Reeves a visit to get information out of him, but doesn’t learn anything of use. The Joker then injects him with some sore of laughing venom which incites hysteria. He’s taken to the hospital where Batman shows up to question him. It’s there that he confesses to helping the Beaumonts escape. However, he betrayed Carl when he ran out of money for his first political campaign and Carl refused to give him any money for it. Reeves ratted him out Valestra instead. The mob then sent the Joker after Carl who found and killed him.

By now, both Batman and Joker realize Andrea is the Phantasm and is back in Gotham to seek revenge on the mob for killing her father and robbing her of her life and her relationship with Bruce. She goes to the Joker’s hideout at the abandoned Gotham World Fairgrounds. As the two fight, Batman arrives and begs Andrea to stop. As this goes on, the Joker activates timer that will detonate a bomb that will take out the entire fairgrounds.

Andrea refuses to leave. She grabs the Joker and the two disappear in a cloud of smoke as Batman falls into the sewer and swims to the river. He watches from afar as the bomb goes off. When he returns, he doesn’t find a trace of either Andrea or the Joker.

Once back at the Batcave, Alfred (Efrem Zimbalist Jr.) tells Bruce that he could not have helped Andrea—revenge had taken control of her. Bruce then spots Andrea’s locket containing a picture of them together.

We then cut to a boat in the ocean where Andrea sets sail to parts unknown—all alone in the world again. Batman, now cleared of the murders, resumes his watch over Gotham.