In Batman & Robin, Batman is up against the cold-blooded Mr. Freeze, who has joined forces with femme fatale Poison Ivy and the monstrous Bane to wage a deadly crime spree against the citizens of Gotham City. Armed with a new array of high-tech crime-fighting gear, Batman enlists the help of his daredevil partner, Robin, and their new secret weapon, Batgirl. Will the combined forces of Batman, Robin, and Batgirl be enough to stop the might of the evil alliance of Mr. Freeze, Poison Ivy, and Bane? 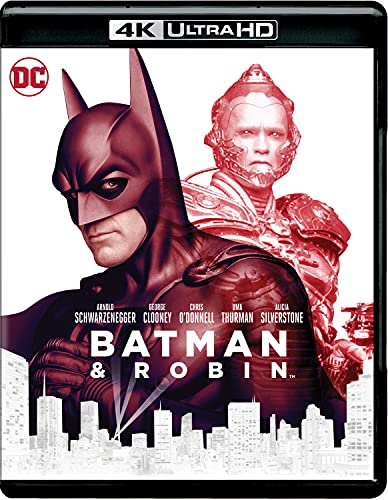 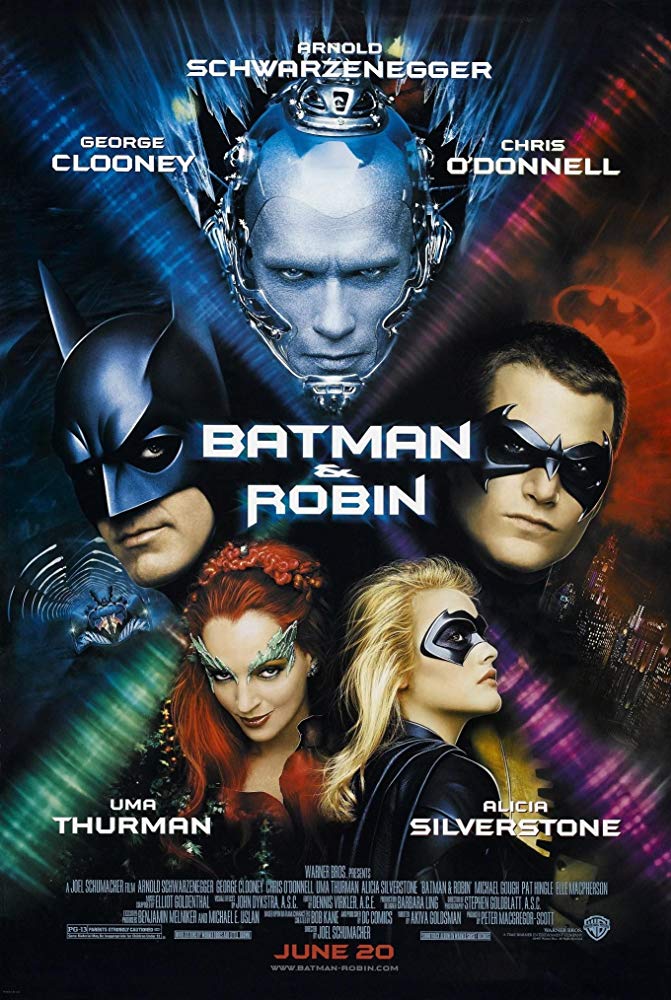 Batman (George Clooney) and Robin (Chris O’Donnell) encounter a new enemy in Gotham City, Mr. Freeze (Arnold Schwarzenegger). Freeze has been on a crime spree stealing diamonds from all over Gotham. The caped crusaders catch up to the criminal at the natural history museum where Freeze is attempting to steal an extremely large diamond. Freeze freezes Robin and makes his escape, leaving Batman to thaw his partner before he dies of hypothermia. Batman and Robin learn that Mr. Freeze was originally Dr. Victor Fries, a famous doctor who developed a cure for MacGregor’s syndrome. Fries created the cure for his terminally ill wife, Nora Fries (Vendela Kirsebom), whose MacGregor’s syndrome was too far advanced for her husband’s cure. Fries was involved in a lab accident that rendered him unable to live at normal temperatures, forcing him to wear a special cryogenic suit powered by diamonds in order to survive.

In Brazil, botanist Dr. Pamela Isley (Uma Thurman) works in a Wayne Enterprise lab with the deranged scientist Dr. Jason Woodrue (John Glover). Woodrue is experimenting on a strength enhancing drug called venom. Isley witnesses Woodrue use the drug on a scrawny man which turns him into the hulking monster known as Bane (Robert Swenson). Isley threatens to expose Woodrue, so he dumps a shelf full of poisons on her, intending to kill her. However, Isley survives and becomes the super villain Poison Ivy. Ivy’s kiss is deadly, so she kisses her attempted killer and takes his monstrous soldier with her to Gotham City.

Meanwhile, Barbara Wilson (Alicia Silverstone), Alfred Pennyworth’s (Michael Gough) niece, visits him at Wayne Manor. Bruce Wayne, alias Batman, invites her to stay at his mansion until she returns to school in the upcoming semester. Later, Bruce attends a ceremony to celebrate Wayne Enterprises donation of a new telescope for Gotham Observatory. Ivy, dressed as Isley, crashes the ceremony. She proposes a project that she believes will help the environment, but Bruce declines her offer. Ivy’s project would actually kill millions of people.

That night, Batman and Robin attend another charity event that is crashed by Ivy. Ivy uses her abilities to seduce the two crime fighters. However, her efforts are thwarted when Freeze arrives and steals a diamond from the event. Batman and Robin pursue Freeze and actually capture him. Freeze is placed into a special containment cell at Arkham Asylum. Ivy assists Freeze to escape when she kills the two guards with her kiss.

Meanwhile, Dick Grayson, alias Robin, discovers that Barbara is participating in illegal street motorcycle racing in order to earn money to pay for treatment for Alfred. Bruce reveals to Dick that Alfred has MacGregor’s syndrome and is dying. The only hope for Alfred is Freeze’s cure, which they do not have access to since Freeze escaped.
Ivy places a Robin signal into the sky, drawing the Boy Wonder to her secret lair. Ivy kisses Robin, but he doesn’t die due to the rubber lips that Batman told him to wear. Ivy captures Robin, but Batman arrives to save him. Barbara, alias Batgirl, also shows up and fights Ivy. Ivy is captured in one of her own plants. Barbara reveals that she found the Batcave and the computer system made her a costume as per her uncle’s wishes.

Freeze uses the new giant telescope at the Gotham Observatory to freeze the entirety of Gotham City. Batman, Robin, and Batgirl join forces to stop and take down Freeze. Robin and Batgirl battle Bane, while Batman takes on Freeze in the main observatory. Robin and Batgirl are able to knock the venom hose out of the back of Bane’s head, reducing the thug to the scrawny man that he once was. Batman defeats Freeze, but Freeze blows up the telescope, preventing the heroes from thawing the citizens of Gotham City. Batgirl and Robin use the Wayne Enterprises’ satellites to shine sunlight onto the city, thawing everyone who is frozen.

Batman shows Freeze a video of Ivy confessing that she killed Freeze’s wife, but Batman informs the criminal that she survived. Batman asks Freeze for his help in saving Alfred. Freeze gives Batman two samples of the cure. Batman gives the cure to Alfred and he survives. Freeze is taken to Arkham Asylum and placed in the same cell as Poison Ivy, the person that he wants to kill the most. Bruce, Barbara, and Dick agree to work as partners in their war against crime in Gotham City.