The titans collide as the Dark Knight and the Man of Steel come to blows. Eighteen months after the events of Man of Steel, Batman perceives Superman as a threat to all humanity and takes steps to prepare himself for ultimate confrontation that he believes will happen. Meanwhile, Superman struggles to find his place in a world that both fears and worships him. However, the duo are soon forced to confront an even greater threat created by nefarious billionaire Lex Luthor. 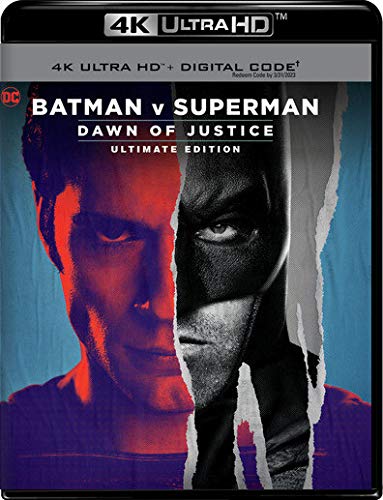 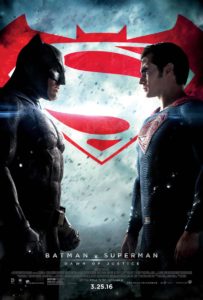 In a flashback to his childhood, Bruce Wayne (Brandon Spink) runs from his parents’ funeral after remembering the night they were murdered. In his flight, he falls into a cave, where he has a dream that a circling vortex of bats elevates him back the surface. Jumping to the future, Bruce Wayne (Ben Affleck) is in Metropolis during the battle between Superman (Henry Cavill) and General Zod (Michael Shannon) depicted in Man of Steel. The two Kryptonian refugees cause death and destruction everywhere, knocking down one skyscraper after another. Bruce attempts to get to the Wayne Enterprises building, but it is destroyed. A helpless Bruce looks towards the sky as he sees a threat that needs to be eliminated.

Eighteen months later, Superman has become a controversial figure in the world. Many see him as a savior, while many others, like Bruce, see him as a threat. Billionaire Bruce secretly operates as Batman in Gotham City, eliminating the criminal element for over twenty years. Across the bay, Superman’s alter ego Clark Kent seeks to write an expose on Batman’s form of justice for the Daily Planet. However, the Planet’s editor, Perry White (Laurence Fishburne), tells Clark that no one is interested in the story.

Bruce learns that Russian weapon trafficker Anatoli Knyazev (Callan Mulvey) has been contacting LexCorp owner Lex Luthor (Jesse Eisenberg). Bruce begins investigating his fellow billionaire. At the same time, Luthor attempts to persuade Senator June Finch (Holly Hunter) to allow him to import Kryptonite that was discovered after Zod’s terraforming attempt in the previous film. Luthor wishes to use it as a deterrent against future Kryptonian and metahuman threats, such as Superman. The Senator declines, but Luthor makes a separate arrangement with Finch’s subordinate who grants him access to Zod’s body and the Kryptonian scout ship sitting in the middle of Metropolis.

And now you will fly to him, and you will battle him to the death. Black and blue. Fight night. The greatest gladiator match in the history of the world: God versus man; day versus night; Son of Krypton versus Bat of Gotham! Lex Luthor

Bruce attends a gala at LexCorp with the intent to gather information from the company’s mainframe. He is introduced to Clark Kent by Luthor, and the reporter takes an instant dislike of Bruce. Bruce then breaks into the LexCorp mainframe, but Diana Prince (Gal Gadot) steals the data before Bruce can get to it. However, she returns the drive to Bruce after she fails to access the information on it. While decrypting the drive, Bruce dreams of a post-apocalyptic world where he leads rebels against an evil Superman and Parademons. Bruce is awakened from the dream by the Flash (Ezra Miller), who appears through a time portal and tells Bruce that Lois Lane (Amy Adams) is the key and urges the billionaire to find the others before vanishing into nothingness. Bruce examines the decrypted data from Luthor’s files which contains information about several metahumans across the globe, including Diana Prince aka Wonder Woman, Barry Allen aka The Flash, Arthur Curry aka Aquaman (Jason Momoa), and Victor Stone aka Cyborg (Ray Fisher). The information about Diana includes a photo of her from World War I that shows that she has not aged a day. Bruce sends the information to Diana. Afterwards, Bruce tells his butler and confidant Alfred Pennyworth (Jeremy Irons) that he plans to steal the Kryptonite and weaponize it, if necessary, to fight Superman.

Meanwhile, Superman is summoned to appear before a widely publicized Congressional hearing led by Senator Finch. The hearing is to press Superman on his actions against Zod as well as those involved in saving Lois when she was taken hostage by terrorists earlier in the film. Luthor smuggles a bomb into the proceedings by placing it into the wheelchair of a survivor of the Superman/Zod battle and former employee of Wayne Enterprises named Wallace Keefe (Scoot McNairy). When the bomb detonates, everyone in the chambers, including Senator Finch, is killed but Superman. Superman blames himself for not detecting the bomb in time and goes into a self-imposed exile.

Elsewhere, Batman perceives Superman as a viable threat and breaks into LexCorp to acquire the Kryptonite to make his weapons. Bruce builds a superpowered exoskeleton, a Kryptonite gas grenade launcher, and a Kryptonite-tipped spear in preparation for his upcoming battle with Superman. At the same time, Luthor enters the Kryptonian ship and begins accessing the database from technology accumulated over centuries from other worlds. He also begins experimenting on Zod’s body in the hopes of creating another weapon.

With his pieces in place, Luthor lures Superman out of exile by kidnapping Lois and Superman’s adoptive mother Martha Kent (Diane Lane), revealing that he knows Superman’s secret identity. He takes Lois to the top of the LexCorp building and pushes her off the side. Superman saves her and returns her to the safety of the ground before confronting Luthor. Once confronted, Luthor reveals that he has fueled the distrust between him and Batman. Luthor demands that Superman kill Batman in exchange for Martha’s life.

Superman flies off to confront Batman, who has placed the Bat signal in the sky to alert the Man of Steel where he is. Superman tries to explain to Batman that they have been manipulated, but the Dark Knight presses his attack and subdues Superman by using the Kryptonite gas grenades. Batman prepares to kill Superman by using the Kryptonite spear, but Superman pleads with him to save Martha. Batman is confused, as his mother’s name was Martha as well. Lois arrives during Batman’s hesitation and explains that Martha is the name of Superman’s mother. Batman comes to his senses and throws down the spear. Batman promises to rescue Martha while Superman goes to confront Luthor on the scout ship.

When Superman arrives, Luthor executes his backup plan, unleashing a monster genetically engineered from DNA from both Zod’s body and Luthor’s blood. This Doomsday weapon has all the same abilities as Superman. The Man of Steel cannot get the better of the mindless beast. Batman returns after saving Martha from execution by Anatoli, but he is helpless against Doomsday as well. Diana sees the news coverage just as she is about to fly out of Metropolis and gets off the plane. She arrives just as Doomsday is about to kill Batman and saves him. The trio fight Doomsday to a near standstill. Superman realizes that the monster has his same vulnerability to Kryptonite. He retrieves the spear and impales Doomsday with it. However, the creature also impales Superman in its dying moments. Superman is severely weakened by the Kryptonite exposure and dies from his injuries.

In the aftermath, Luthor is arrested and imprisoned. Batman infiltrates the prison and warns Luthor that he will always be watching the madman. Luthor gloats that the death of Superman has made the Earth vulnerable to powerful alien threats. Soon after, a memorial is held for Superman in Metropolis. At the same time, Clark is declared dead, and Bruce and Diana attend his funeral in Smallville, where Clark’s body is actually buried. Martha gives Lois an envelope containing an engagement ring from Clark. Bruce tells Diana that he regrets failing Clark in life and will work to uphold his legacy. Bruce asks Diana to help him find the other metahumans so that they can form a team to protect the Earth. After everyone leaves, the dirt atop Clark’s coffin briefly levitates.