A Christmas celebration is underway at the Prince’s castle sometime after the events of the first Beauty and the Beast film. A debate arises as to who saved Christmas the preceding year. The film then flashes back to an untold tale that occurred during Belle’s imprisonment at the castle when the Prince was still the Beast. Belle prepares the castle for Christmas against the Beast’s wishes, while the evil pipe organ Forte schemes to insure that the magical spell that has turned the Prince into the Beast is never broken under any circumstances. Will Belle and the Beast ever find love in each other, as well as rediscover the true meaning of Christmas once again? 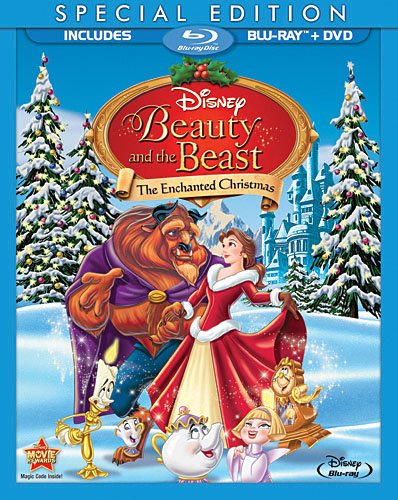 ‘Beauty and the Beast: The Enchanted Christmas’ Movie Summary 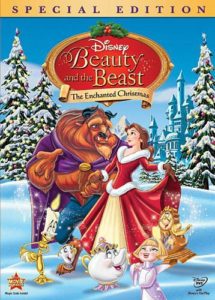 A Christmas celebration is underway at the Prince’s (Robby Benson) castle sometime after the events of the first Beauty and the Beast film. Nearly everyone from the nearby village is in attendance at the now human Prince’s party. Lumiere (Jerry Orbach) and Cogsworth (David Ogden Stiers), in human form, engage in an argument as to who saved Christmas the previous year when Belle (Paige O’Hara) was the Beast’s captive. Mrs. Potts (Angela Lansbury) then recounts the tale of the previous year’s enchanted Christmas.

Flashback to the previous December, not long after the Beast (Robby Benson) saved Belle from the wolves. Belle looks forward to the Christmas season, as do most of the castle’s residents. However, the Beast is adamantly against celebrating the Christmas holiday since he was transformed into the Beast on Christmas Eve. Belle attempts to lighten the Beast’s hatred to the holiday by taking him ice skating. The couple is seen skating by Forte (Tim Curry), a pipe organ that is permanently affixed in the West Wing of the castle.

Forte was formerly the Prince’s court composer and does not want the enchantment spell to be broken as he is of more use in his enchanted form of a pipe organ. Forte sends his piccolo minion, Fife (Paul Reubens), to sabotage Belle and the Beast’s newly formed friendship and causes the couple to crash into the snow. Belle laughs at the fall and makes a snow angel. However, when the Beast does the same, he sees the form of a monster. The Beast roars angrily and destroys the image before storming off into the castle.

Belle decides to celebrate Christmas regardless of the Beast’s feelings. However, the Beast slowly begins to warm to the idea of a celebration after Lumiere talks to him. Belle encounters Forte in the West Wing, and the scheming pipe organ suggests that she go into the forest to find a Christmas tree for the castle. Belle does, and Forte tells the Beast that Belle is abandoning him. In response, the Beast destroys all of the Christmas decorations in the dining room and sets off to find Belle in the forest.

In the forest, Belle and a few of the servants find and chop down the perfect Christmas tree. However, on the way back, Belle falls through some thin ice and almost drowns. The Beast arrives and saves Belle just in the nick of time. Belle is grateful that the Beast has saved her life for a second time, but the Beast is still furious with her and locks her in the dungeon for breaking her promise not to leave the castle.

Belle is visited and comforted by many of the servants while she is in the dungeon. Eventually, the Beast discovers the storybook that Belle intended as a present for him. He reads the book and has a change of heart, releasing Belle from her cell. The Beast gives Belle his consent to celebrate Christmas in the castle. Forte is enraged at the blossoming love between Belle and the Beast. The pipe organ tries to kill everyone by using his power to bring down the castle. Fife betrays Forte and chooses to help Belle and the Beast. The Beast rushes to the West Wing to stop Forte. The two fight briefly, but ultimately Forte’s keyboard is damaged. Forte collapses and smashes on the floor.

Soon after, the damage to the castle is repaired and everyone in the castle joins together for a Christmas celebration. The castle and the servants are decorated for the holiday. Belle and the Beast do their ballroom dance from the first film.

The film then returns to the present where Mrs. Potts concludes that it was Belle who saved Christmas the previous year. The Prince and Belle enter the court to great everyone gathered for the celebration. Belle presents Chip (Haley Joel Osment) with a storybook as a present. The new court composer, Fife, leads the orchestra in some Christmas music. The Prince and Belle share a moment on the balcony where he gives his love a rose as a gift.