Bedknobs and Broomsticks begins in August of 1940. Three orphans temporarily move in with a Miss Price in the English village of Pepperinge Eye. In secret, she’s studying to become a witch. When she receives a letter from the Correspondence College of Witchcraft in London, she and the children fly on an enchanted bed to London where they meet the headmaster of the defunct school.

The man, Mr. Emelius Brown, is actually a con artist. At his vacant estate, he gives Miss Price a book called The Spells of Astoroth. However, it’s missing the most important final spell she needs to complete her training. For that, they find a man known as the Bookman, and he leads them to a foreign island full of imagination and wonder. 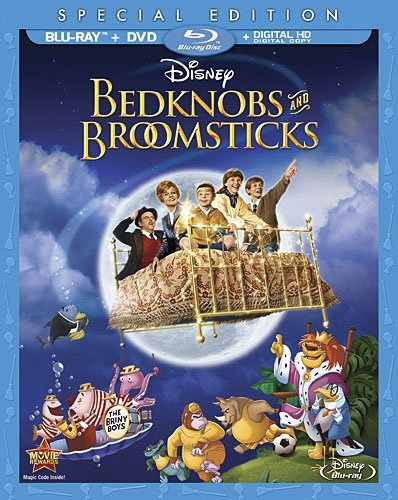 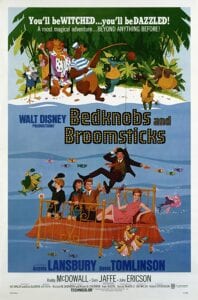 Bedknobs and Broomsticks takes place during the Blitz. Three children named Charlie, Carrie, and Paul Rawlins must evacuate London to Pepperinge Eye. There Miss Eglantine Price (Angela Lansbury) reluctantly agrees to take temporary care of them. On the night children attempt to run back to London, but spot Miss Price attempt to fly on a broomstick. After she crashes, Charlie decides to blackmail her instead.

Miss Price reveals she is learning witchcraft through a correspondence school to help with the British war effort. She offers the children a transportation spell in exchange for their silence. She casts it on a bedknob, and makes it so that only Paul can work the spell—since he’s the one who handed it to her in the first place.

When Miss Price receives a letter that her school’s closing, she is unable to learn her final spell. So, she has Paul use the enchanted bed she made to return everyone to London. Once there, they track down Professor Emelius Browne.

Browne is a charismatic showman/con artist who used an old book he found to create the course. He’s quite surprised to find out that the spells actually work for Miss Price. Reluctantly though, he hands the book over to her, but not before trying to get her to join his magic act. Miss Price’s saddened to find only a portion of her final spell, Substitutiary Locomotion, is in it because it’s torn in half on the necessary page.

Off to see the Bookman

Next, they all travel over to Portobello Road where rest of the book might be. A man named Swinburne, who works for the Bookman, approaches them once Portobello closes for the night. At knife point, orders them to come with him. There, both Miss Price and the Bookman combine their books to learn the spell isn’t in it. It’s actually inscribed on a medallion called the Star of Astoroth. It once belonged to a sorcerer of that same name.

The Bookman believes a pack of wild animals (whom Astoroth gave anthropomorphism to) have the medallion to a remote island called Naboombu. Where the island is located is a mystery. However, back in the 17th century, a lascar claimed he saw Naboombu before he died from overexposure. The Bookman doesn’t believe the island really exists because he looked for it in all the charts. None of them ever mentioned the fabled place. However, Paul pipes up, and says it really does exist via a storybook he read at Mr. Browne’s place in London.

The group uses that reference to next take the bed to a lagoon on the Island of Naboombu—where it promptly falls into the water and sinks to the bottom. Underwater, Mr. Browne and Miss Price dance to a song where they unknowingly enter and win enter a dance contest. Just as they receive their first place trophy, a bear fishes the bed out of the sea. He’s disgusted to find he fished people out of the water because there’s: “No Peopling Allowed.”

Take me to your leader!

Paul’s book says that anyone who wants to see the king can see him. The bear reluctantly takes them before the island’s ruler, King Leonidas, who proudly wears the Star of Astoroth around his neck. Angry because there’s nobody to officiate his football match, Mr. Browne offers to be the special referee. The match is pure lunacy with no real rules. The match ends with Leonidas proclaiming victory after he blows a deflated ball into the goal. After the game’s over, Mr. Browne takes the opportunity to do a little gypsy swap where he takes the medallion, and replaces it with his referee whistle.

Miss Price excitedly looks it over, and does find her missing spell for Substitutiary Locomotion on it. The group hightails it back to the bed on the edge of the lagoon. However, Leonidas quickly discovers Mr. Browne’s treachery, and takes chase. Miss Price is able to transform him into a rabbit as they escape to safety.

Once back home, Miss Price prepares to try out her last spell, but finds the Star has vanished. It disappeared back the fantasy world of Naboombu. Paul reveals everyone wasted their time as the spell was actually in his storybook all along—nobody ever listens to Paul.

Miss Price sings a song, and tries out the spell on Mr. Browne’s shoes. It works as the shoes come alive, but she also inadvertently brings many other things to life in the house too. Controlling them all proves to be most difficult.

Just then, Mrs. Jessica Hobday arrives to inform Miss Price the children can now relocate with another family who has a farm. However, Miss Price wants them to stay with her. Mr. Browne, on the other hand, can only commit to being non-committal. Once the children begin to refer to him as a their father, he chickens out, and he looks to return to London, ASAP! He goes to the local train station to wait there for the morning departure.

Substitutiary Locomotion on the Nazis

Suddenly, a platoon of Nazi commandos land on the coast where they invade Miss Price’s house. They imprison her and the children in the local museum. Once Mr. Browne observes more Nazis disabling phone lines, he finds and rescues the group. Miss Price takes this opportunity to use Substitutiary Locomotion to bring the museum’s exhibits to life where they form a mini army.

This army of knights’ armor and military uniforms are able to chase the Nazis away. Unfortunately, as they retreat, they destroy Miss Price’s workshop—thus ending her career as a witch. While disappointed, she’s delighted she played a small part in the war effort.

Mr. Browne enlists in the army (because war is better than raising kids), and departs with an escort from the local Home Guard. Paul shows Miss Price he still has the enchanted bedknob so they can continue on with their misadventures.