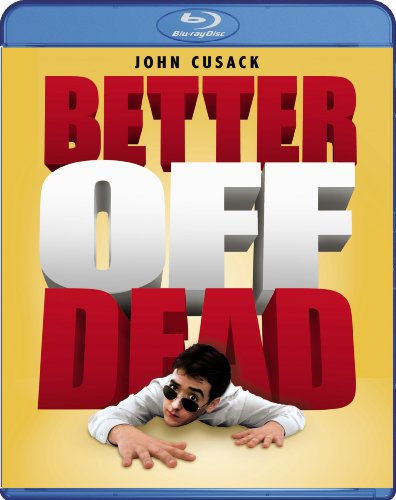 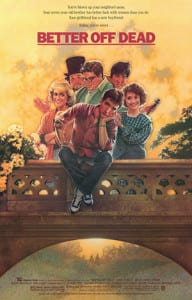 Better Off Dead begins with a teenage John Cusack (Lane Meyer) waking up in his disturbing bedroom wallpapered by pictures of his one true love Beth. This sets the stage for the theme of the movie, winning the heart of the superficial, hot, blond bitch which will make your life complete, and the title of the movie, better off than being dead.

Enter the love rival, Roy Stalin, the blond-haired, square-jawed, 25-year-old, douche bag, high school student, who has been charged with selecting the high school skiing team based on his ability to ski the infamous K12 run. He wastes no time in cheating Lane out of his position on the team and stealing his true love, Beth, all in one scene.

Lane is now in a self-loathing, suicidal funk. Little does he know that the real love of his life is the French foreign exchange student across the street, Monique, who is currently held captive by a woman straight out of Jersey Shore who is a coddling, controlling mother of Ricky, the fat, anti-social retard (I shouldn’t use that word).

This girl turns out to be the mother lode, as she not only cute for a hobbit sized girl, but she fixes Lane’s broken down Camaro (the quintessential 80’s white trash sports car), teaches him how to ski the K12, and instills in him the confidence he needs to take on Roy Stalin on the dreaded ski run in front of the whole school.

Just when Lane and Monique are about to consummate their love on the slopes, Lane is confronted by the relentless running joke of the movie, the paper boy that just wants to collect the two fucking dollars owed to him by the Meyer family for delivering their paper the last month.

In his haste to flee from paying the kid, he takes off on one ski and somehow, without a ski lift, finds his way to the top of the K12 peak with Stalin just in time for the big, redemptive race that will win Beth’s devotion.

On one ski, he is not only able to survive the infamous K12 run, but beat Stalin down the slopes to win the race, win his popularity, and of course, win the undying love of his dear Beth. But in his joy and celebration, he realizes that it is not Beth that is worth fighting for; it is Monique, the French foreign exchange student that is really worth fighting for.

So, that’s exactly what he does in a subsequent epic battle with Ricky, the fat social retard. After defeating Ricky in a fencing match with ski poles, he grabs the diminutive darling, throws her into his Camaro and drives hundreds of miles south to Southern California where she can live out her dream of seeing Dodger Stadium. With his parked Camaro on home plate, they make out and live happily ever after.