In Beverly Hills Cop, Axel Foley is a Detroit cop who, after the murder of his friend, travels to California to find the killer. He believes the murderer operates an art dealership as a cover in Beverly Hills. Reluctantly, Foley teams up with two detectives from the Beverly Hills police force who were supposed to keep a watch on him. They aren’t too keen on Foley’s approach to tackling tough situations; none of which are acceptable to their chief of police. 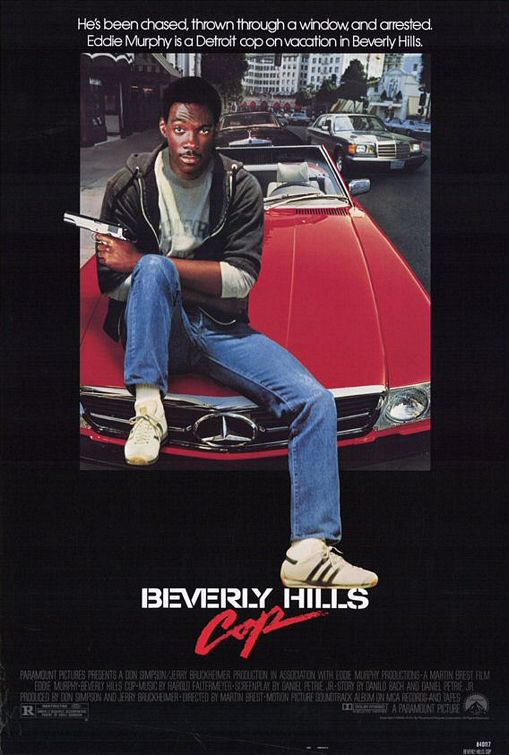 Axel Foley does his best Eddie Murphy impersonation as a foul-mouthed, fly-by-the-seat of his pants Detroit detective who does more damage to parked cars with a stolen truck filled with cigarettes than Burt Reynolds did in all three Smokey and the Bandit movies combined. Axel’s latest shenanigans has got him in hot water with his boss.

On the night of his latest Fast and the Furious joyride, Axel’s best friend arrives straight from jail via Beverly Hills where he shows up w thousands of dollars in illegal, stolen German barabonds. After a night of drinking, Axel and his friend arrive in time for Axel to be konked on the head and his friend executed in the hallway.

Axel wakes to find his buddy dead, the barabonds missing, and his boss telling him to stay out of it. So Axel takes his vacation. But if he just took some R&R and forgot about it, our movie would be called “Smart-Ass Detroit Cop Bores The Shit Out of The Audience”, so Axel heads straight to Beverly Hills so we could use that title instead. Axel checks into a too-expensive Beverly Hills hotel, then promptly visits his old friend, Jenny, who works in a posh Beverly Hills art gallery where his other friend worked.

The gallery is owned by Victor Maitland, a by-the-numbers ex-Nazi druglord and stolen barabonds jerk with trained hitmen protecting him because all legitimate businessmen have an army of armed bad guys on their payroll. Axel visits Maitland and immediately jumps out the plate glass window and is promptly arrested by the Beverly Hills police.

He is brought into the detective bureau and meets Taggart and Rosewood, two by-the-book tightasses that don’t want Axel bugging high-end clients that would be a bad image for the city. Axel is followed and ultimately gives not one but two sets of cops the slip, with two of them getting Axel’s banana up their tailpipe…ewww…get your heads out of the gutters. They were real bananas in the car’s tailpipe, Pervs.

Axel takes two of the cops to a strip club where all three “super cops” stop an armed robbery, but not before seeing Rosewood make it rain for a stripper. Anyway, Axel discovers Maitland is transporting drugs without getting government approval since this was the days before our government officials were actually taking bribes. Axel goes to the detectives but is told to pack his bags and leave town before Arthur Bach’s potential father-in-law grabs a cheese knife and tries to cut off protruding parts of Axel’s body.

Axel, Jenny and Rosewood go back to the warehouse only to have Axel and Jenny taken prisoner because there are NEVER bad guys around the actual drugs when they are delivered, don’tchaknow. Anyhoo, Axel is saved by Rosewood and they race over to Maitland’s place to save Jenny because that’s always the place you take a kidnap victim is back at the big boss’ mansion in Beverly Hills.

A horrific-slash-comic gunfight erupts with Axel, Rosewood and Taggart exchanging snub-nose pistol fire versus the baddies all packing machine guns. But never fear. Maitland hires all the ex-storm troopers from the Empire Strikes Back set so they can’t shoot anyway. So Axel and crew take out the nameless baddies until just Maitland and Axel face off with Jenny in the middle.

Does Maitland shoot Axel from 10 feet away like he could have earlier when he only shot his shoulder when he was standing next to him? Will Axel fill Maitland’s body with so much lead Maitland will be able to be recycled for your children’s preschool pencils? Will there ever be a show called “Miami Vice” where cool, smart-ass cops can run down sleazebag criminals with less humor and less 4-letter words in their show? Watch “Beverly Hills Cop” to find out.