Five years after an ominous unseen presence drives most of society to suicide, a survivor and her two children make a desperate bid to reach safety. 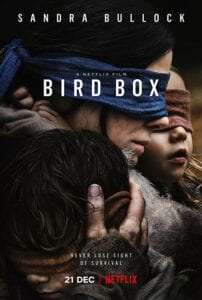 Bird Box takes place in a post-apocalyptic world. We meet Malorie Hayes who tells two young, unnamed children to get in a rowing boat. They are headed downstream in a river, and she orders the children not to remove their blindfolds, or else they will die. From here on out, the film alternates between two points in Malorie’s story—their journey down the river and the invasion that led to the river journey—until the two merge into the present day with this attempt to reach a safe haven.

We next cut back to five years ago where Malorie’s sister, Jessica, visits her during her pregnancy. There’s a news report on television about a group of unexplained mass suicides in Romania leading to more across all of Europe.

Jessica accompanies Malorie to the hospital for a routine pregnancy checkup. Afterwards, as they leave the hospital, Malorie spots a woman repeatedly bash her head into a glass panel. Then others begin to panic as chaos and alarm spreads throughout the town. Whatever it is that has been spreading through out Europe has reached North America.

Jessica attempts to drive the two away from this violence,. However, she catches a glimpse of this odd phenomenon affecting everyone. Once she sees it, she loses control of herself and the car—which crashes. Malorie is injured but alive. She looks up in time to see Jessica knowingly walk into the path of an oncoming garbage truck; killing herself dead.

Malorie flees on foot through the streets of mass chaos. A woman named Lydia invites Malorie over to a house for safety, but her husband, Douglas, doesn’t want her there. However, right before she reaches Malorie, Lydia enters some sort of trance. She begins talking to her dead mother, and casually climbs into a burning car. It subsequently explodes; killing her and the car. A man named Tom passes by, and brings Malorie into the house.

While there, we next meet Charlie, and he seems to have a grasp on what’s going on. He has this theory that some sort of demonic entities invaded Earth. They take the form of their victim’s worst fears, and then use that fear to drive them insane. The victim then kills themself from it.

Tom now insists that they cover all the windows in the house, and blindfold themselves if they go outside. Meanwhile, a man named Greg volunteers to tie himself to a chair, and monitor the surveillance cameras to spot that invading entity. However, after witnessing it, he begins rocking his chair wildly, and then slams his head into a hearthstone until dead.

Soon another pregnant survivor named Olympia arrives, but their food supply is nearly depleted. A large segment of the group heads to a nearby supermarket to restock. Malorie spots some pet birds, and adopts them for good measure.

Once there, a coworker of Charlie’s shows up, and begs for help outside the locked supermarket. Charlie says he’s a little crazy, so they debate the risks of opening the door. However, the birds that Malorie saved become hysterical in their box. At first chance, the coworker attacks them. That entity didn’t kill him—instead it used him to infect others. Charlie sacrifices himself to save everyone else. The others all make it back safely to the house.

As time passes, some other survivors, Felix and Lucy, steal the car and drive off. Soon thereafter, Olympia brings a stranger named Gary into the house. He’s the lone survivor of another group, and grumpy old Douglas objects to this new arrival too. In a rage, he threatens the others with a shotgun until an elderly survivor named Cheryl knocks him out cold.

Eventually, Olympia and Malorie go into labor as Cheryl helps them with their births. When Gary takes out various drawings of the entity, he falls into a trance. Most likely that entity had already taken partial control of him before arriving. He opens the garage door in an effort to kill Douglas, and when he peeks outside, the entity takes complete control over him. He knocks Tom out cold before removing all the coverings from all of the windows.

Even though Malorie warns her, Olympia fails to look away. The entity takes control of her, and she jumps out of the window to her death. After Gary forces Cheryl to look at it too, she repeatedly stabs herself in the neck with a pair of scissors. Douglas then blindly tries to shoot Gary with a shotgun, but he fails. Gary picks up Cheryl’s scissors, and stabs Douglas to death. While this is going on, Malorie tries to protect the newborn babies—Malorie gave birth to a boy and Olympia a girl. Tom regains consciousness just in time to kill Gary.

Five years pass, and we are nearly back to point where the movie began. Tom and Malorie are raising the children together, and their names are still only Boy and Girl. A fellow survivor named Rick transmits a message stating that they are safe and well at a community hidden in the forest. The four decide to join that community, but along the way, a group of infected survivors ambushes them.

Tom immediately, runs out to distract the attackers while while Malorie and the children make their escape. When the group notices them, Tom opens his eyes to shoot them dead. Of course, the entity takes control of him, but Tom manages to kill all the remaining members of that group before shooting himself dead.

Malorie, the children, and her birds in a box make their way blindfolded down the river on the aforementioned row boat. They manage to fight off one more infected survivor before the boat flips in the rapids. Malorie, Boy, and Girl find each other, but are soon separated again after Malorie accidentally falls down a hill.

The entity takes this opportunity use Malorie’s voice to convince Boy and Girl to remove their blindfolds. However, it doesn’t work. The real Malorie tells them to fight the urge, and they all reunite once more. The invisible entity chases them until they reach the new community; an old school for the blind. Malorie finally releases her birds from the box they were in. They fly up to the ceiling with the other birds. Now safe, Malorie finally gives the children their names, Tom and Olympia.