At the start of the rice-planting season in northern Italy, two small-time thieves, Francesca and Walter, evade the police looking for them after they stole a valuable necklace. They make it to the train station where the crowds of female workers head to the rice fields in the Po Valley. Walter runs off when the police spot him, and Francesca boards one of the trains. There she meets another worker named Silvana who is on to the two, and their lifestyle excites her. However, when Walter later shows up in the rice fields with a plan for a new robbery, it leads to death and murder. 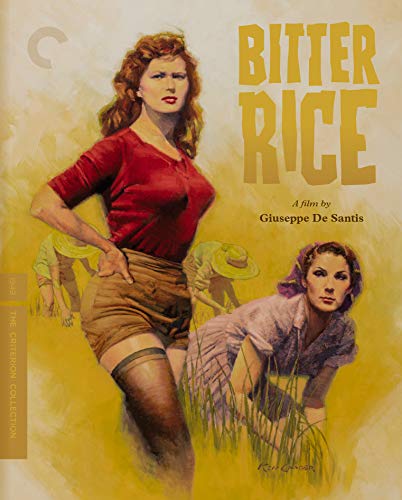 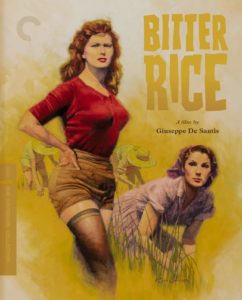 Bitter Rice begins at the start of the rice-planting season in May 1948 in northern Italy. Two small-time thieves, a woman named Francesca (Doris Dowling) and Walter (Vittorio Gassman), mingle with the crowds of female workers heading to the rice pields in the Province of Vercelli to elude the police. The two have just stolen a necklace worth $5 million dollars from the hotel Francesca works (worked) at.

While attempting to board the train, the police spot Walter, and he tells Francesca to board the train without him. He’ll meet her later as it’d be better if they separate where she keeps the jewels for now. As this goes on, a pretty rice worker named Silvana (Silvana Mangano) observes the two, and witnesses the police yell thief at Walter as he runs off. Immediately attracted to the excitement Walter’s criminal behavior brings, Silvana somewhat befriends Francesca on the train.

Since Francesca does not have a work permit, the main boss considers her (and the other women like her) illegals. Silvana gets her mini boss to add Francesca to his books so she can stay. He agrees… for a cut of Francesca’s earnings.

Once at the dorm for the rice fields, Francesca bunks with Silvana. However, as Silvana fills her mattress with straw, Silvana steals the necklace she watched Francesca hide in her bed. Francesca returns to find Silvana and the necklace gone.

Before she can look for her, orders come from the bosses that the main boss has ordered them to send all illegals home. So it looks like Francesca will not be able to confront Silvana. The next morning though, Francesca convinces the other illegals to show up anyway and work twice as hard as the others so the bosses will be forced to keep them.

Silvana and Francesca’s eyes meet out in the fields, and Silvana knows she needs to get rid of Francesca or she’s in trouble. She winds up starting a mini riot between the legal workers and the illegals. However, Sergeant Marco (Raf Vallone), whom the girls met the day before, is training nearby with some other Italian soldiers, and he puts a stop to the melee. He convinces them they are all one, and they should go to the main boss and convince him to let everyone work.

Marco then goes over to Silvana and Francesca as they look ready to fight. Silvana shows him the necklace Francesca stole, and tells him to call the police because she’s a thief. He replies that it’s neither his nor her business, and to give the necklace back to Francesca; which she does. Back at the dorm, Silvana wants to know all about Francesca and Walter’s exciting life. As this goes on, word comes that the big boss has agreed to let all the illegals stay and work.

Sometime later, Walter shows up looking for Francesca. At a night party, as Silvana dances for the crowd (wearing the stolen necklace), Walter spots them all. His presence excites Silvana, and she continues her dance. Walter joins her. Marco, not knowing who Walter is, is there, and he rips the necklace off Silvana’s neck. The two men fight, and Marco easily wins.

Angry at his loss, Walter pulls a knife, but before he can find Marco, Francesca stops him. She goes to give him the necklace, but he calls her an idiot. It’s a fake. She stole the wrong one.

Three days pass, and Walter has observed Silvana’s mini boss and his minions steal rice at night; one bag at a time. That’s given him an idea to steal all the rice in trucks to make up for the money he lost from that failed necklace job. He convinces the men to help him carry out his plan.

With fifteen days left at the fields, Silvana figures out where Walter’s hiding. She goes to visit him. The two wind up near the fields in the pouring rain. Walter takes out a stick and whips her with it as she begins laughing bitterly.

On the last day of work, Walter and his men ready the trucks they plan to use to carry out the rice. Silvana is hesitant to help because that rice will go to pay all the poor women who worked the fields for the last forty days. Walter gives her the (worthless) necklace as an engagement present. Not knowing the necklace is fake she agrees to help.

Francesca shows up to try to change his mind so the women won’t go without pay. However, he threatens her life and sends her away. He then orders Silvana to cause a diversion to carry out the heist under the guise of proving her love to him.

Francesca goes to Marco who’s being discharged that same time, and asks for his help. She tells him everything going on. Unfortunately for her, Marco tells her she needs to find someone else, and she needs to take responsibility for her actions.

At this time, Silvana opens up the gates to flood the fields with water before heading to the party where they crown her Miss Mondina 1948. Then the workers sound the alarm that the fields are flooding; destroying all their work. Silvana feels horrible at what she’s done.

Marco shows up to help, but Francesca gets him to come with her so that Walter and his men can’t truck off all the grain. Francesca and Marco find Walter and Silvana where they confront the two. Marco has a gun in his hand, but Walter is able to throw a knife in his shoulder before Marco spots him.

Francesca takes his gun, and shoots Walter as Walter’s men flee. Walter orders Silvana to take his gun from his pocket, and kill Francesca. She misses three times. Meanwhile, the thieve’s trucks are stuck in the mud, and Walter’s men can’t go any further. The farmers spot them, and catch them.

With guns in hand, Francesca and Silvana find themselves face to face. Francesca tells Silvana the necklace and Walter are both fakes, and that he’s manipulating Silvana like he manipulated her. Silvana uses the last two bullets in the gun to shoot Walter dead as he tries to flee.

Overcome with guilt and shame, Silvana goes outside and throws herself off a tall wooden structure on the farm where she immediately dies. The next morning, as the other rworkers depart the fields, they sprinkle some of their hard-earned rice over Silvana’s body in tribute.