Christmas is coming to Hawthorne College and it is quieting down for the holidays. As many of the students return home for the holidays, one by one, sorority girls on campus are being killed by an unknown stalker. But the killer is about to discover that this generation’s young women are not willing to become hapless victims as they mount a fight to the finish. 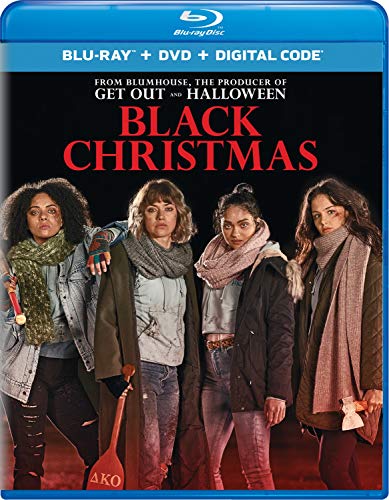 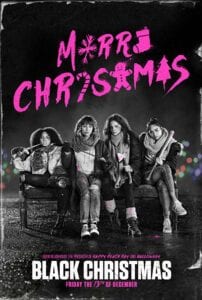 Shortly before the Christmas break at Hawthorne College, college student Lindsey Helman (Lucy Currey) is walking home from class late at night. She begins receiving threatening text messages from an unknown individual. Lindsey becomes concerned and goes into a full-blown panic once a masked individual blocks her path. She begins running to nearby houses and pounds on the doors looking for help while the masked man disappears and reappears several times. Ultimately, the masked man stabs Lindsey in the chest with an icicle and hides the body.

The next day, Riley Stone (Imogen Poots) wakes to find her Mu Kappa Epsilon (MKE) sorority house in chaos. Her sorority sisters, Kris Waterson (Aleyse Shannon), Marty Coolidge (Lily Donoghue), Jesse Donovan (Brittany O’Grady), and Helena Rittenhouse (Madeleine Adams) are preparing for a talent show at the Delta Kappa Omicron (DKO) fraternity. Riley is struggling with the trauma of being a victim of sexual assault by the former DKO fraternity president Brian Huntley (Ryan McIntyre) when she was a freshman. Huntley escaped prosecution and many people accuse Riley of fabricating the assault.

Riley is informed that Huntley is returning to the fraternity to oversee the talent show. Meanwhile, Kris has also drawn the anger of the DKO fraternity, as well as Professor Gelson (Cary Elwes), for her school petition to remove the bust of university founder and notorious misogynist Calvin Hawthorne from the main building. Her petition also calls for Gelson’s termination due to his refusal to teach books written by women.

Later that night, the MKE sisters, including Riley arrive at the DKO fraternity. Riley catches a glimpse of a strange ritual involving DKO pledges and black goo leaking out of the Calvin Hawthorne bust. Helena disappears from the group, and Riley finds her about to be sexually assaulted by one of the DKO frat boys. Riley saves her, but Helena is too drunk to sing in the competition, so Riley replaces her in the show. The MKE sisters perform a song condemning the rape culture at the fraternity. Riley sees Huntley in the crowd and sings a lyric about his rape of her.

Meanwhile, Helena is abducted by Lindsey’s attacker. Back at the MKE house, the sisters begin to receive threatening messages on their phones from a Calvin Hawthorne account, much as Lindsey did prior to her murder. MKE sister Franny Abrams (Nathalie Morris) is killed by the masked man while she looks for the house’s cat. At the same time, Riley has a strange encounter with Gelson at the DKE house. She finds a list of the MKE girls among his papers while the professor’s attention is diverted elsewhere.

Sometime later, Jesse is murdered in the MKE house and her body is left in the attic. Riley, Kris, and Marty begin sharing information about the threatening texts they are receiving and begin to suspect someone is in the house. The trio is attacked a short time later by a masked man. During the attack, Marty is shot in the leg with an arrow. Kris discovers Jesse’s body in the attack, while Marty’s boyfriend Nate (Simon Mead) arrives at the house. Nate begins to act like he is getting a headache, but he is quickly murdered by the masked man. Riley responds by killing the masked man. However, two other masked men suddenly appear and attack the girls.

Marty is killed, but Riley and Kris kill one of the attackers. They realize they are covered in black goo, so they remove the killer’s mask. They find that it is one of the DKO pledges with the black goo on his forehead. Riley states that he was one of the pledges that she saw earlier during the DKO initiation ceremony.

Kris and Riley escape from the sorority house just as additional masked men begin to show up. They drive away in Nate’s car. Riley speculates that Hawthorne is responsible for the killings due to his reputation for dabbling in black magic. She theorizes that the black goo and the bust at the DKO house somehow control the pledges. Kris wants to go to the police, but based on Riley’s history with law enforcement, Riley does not think that they will believe the girls’ story. She tells Kris that they need to go to the DKO house to destroy the bust. Kris refuses, and Riley gets out of the car and goes on her own.

On the way to the DKO house, Riley enlists the aid of Landon (Caleb Eberhardt), a boy from another fraternity who is interested in Riley. Landon attempts to distract the DKO brothers so that Riley can destroy the bust. However, Landon begins to get headaches and the DKO frat brothers convince Landon to become a DKO pledge and place the black goo on him. Landon succumbs to the will of the Hawthorne bust. Riley discovers Helena tied up but alive in the house. However, when she tries to free her sorority sister, she is knocked unconscious by a DKO pledge. Meanwhile, Kris comes across some of Lindsey’s sorority sisters being attacked by other DKO pledges and rescues them.

At the same time, Riley awakens to find herself tied up in the DKO house. She is confronted by Gelson, Huntley, and several other DKO members in ceremonial garb. Gelson explains that after Kris forced the removal of the Hawthorne bust, the men of DKO discovered Hawthorne’s plan, involving a spell and the black goo, to keep unruly women in check. The goo allows the spirit of Hawthorne to possess the pledges and sends them out to murder women who dare to step out of line. Helena reveals that she has been secretly working with the fraternity to steal personal items from her sorority sisters to allow the possessed pledges to locate their targets. A moment later, however, one of the pledges murders Helena by breaking her neck.

Riley is about to be sacrificed when Kris and Lindsey’s surviving sorority sisters show up and begin fighting with the DKO pledges. Riley overpowers Huntley and smashes the Hawthorne bust, freeing Landon from the power of the black goo. Kris sets Gelson on fire, and the sorority sisters flee the room, locking all the possessed DKO pledges in the fiery room. They leave the DKO house, presumably to let all the fraternity men burn to death.

In a mid-credit scene, the MKE sisters’ cat licks up some of the black goo.