T’Challa, after the death of his father, the King of Wakanda, returns home to the isolated, technologically advanced African nation to succeed to the throne and take his rightful place as king. 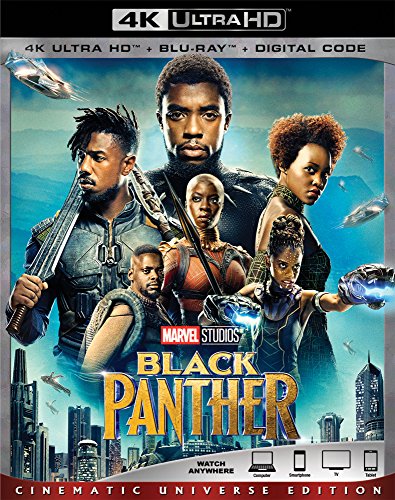 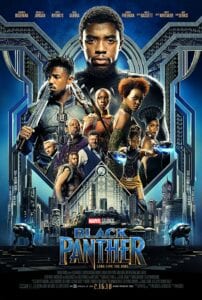 Black Panther begins thousands of years ago when five African tribes go to war over a meteorite that contains the metal now know as vibranium. After one of the warriors ingests a heart-shaped herb, he gains superhuman abilities, and transforms into the first “Black Panther” ever. With his new skills, he is able to unite four of the five tribes to form the nation of Wakanda. The Jabari Tribe sets out on their own destiny.

As the centuries pass, the Wakandans use the vibranium on the down low to develop advanced technology to better their people. They pose as an isolated Third World country to avoid notice from the “civilized” world.

Next up is 1992, and King T’Chaka goes to visit his brother N’Jobu in Oakland, California who is working undercover there. T’Chaka accuses N’Jobu of aiding and abetting a black-market arms dealer named Ulysses Klaue to steal vibranium from Wakanda. When N’Jobu’s partner, Zuri, reveals he’s also an undercover Wakandan, he confirms T’Chaka’s accusations.

We then cut to the present day. T’Chaka is now dead, and his son T’Challa returns home to Wakanda to take his place on the throne. He and Okoye, the Dora Milaje’s leader, bring T’Challa’s ex-lover Nakia out of an undercover assignment so she can attend his coronation. T’Chaka’s mother, Ramonda, and younger sister, Shuri, also attend. Once the ceremony commences, M’Baku, the Jabari Tribe’s leader, challenges T’Challa’s claim to the crown in a ritualistic combat. When T’Challa defeats him, he persuades him to yield to him rather than die.

Back in Merrie England, Klaue and his accomplice, the ex-U.S. black ops soldier, Erik Stevens (AKA Killmonger) head to a London museum with a small gang to steal a Wakandan artifact. T’Challa’s friend (and Okoye’s lover, ooohhhh) W’Kabi wants Klaue brought back alive. T’Challa, Okoye, and Nakia head out to Busan, South Korea where Klaue is in the process of selling that artifact to CIA agent Everett K. Ross.

After a chaotic firefight, T’Challa captures Klaue, but he’s forced to release him into Ross’ custody. At this point, Klaue spills the beans to Ross that Wakanda’s international image is a sham. They are in all actuality, a technologically advanced civilization. Killmonger shows up, and rescues Klaue from Ross, but Ross is mortally wounded while protecting Nakia. T’Challa opts to take Ross to Wakanda to save his life as opposed to retrieving Klaue.

As Shuri heals Ross, T’Challa questions Zuri about N’Jobu. Zuri then reveals that N’Jobu planned to share Wakanda’s technology with people of African anywhere in the world they needed it to help them conquer any oppressor.

After T’Chaka arrested N’Jobu, N’Jobu attacked Zuri, and T’Chaka was forced to kill him. He then enlisted Zuri to lie that N’Jobu had disappeared. He left N’Jobu’s son behind in America to maintain that lie, and that son grew up to be Killmonger.

Meanwhile, Killmonger eliminates Klaue, and takes his body to Wakanda. He goes before the tribal elders to reveal his identity as N’Jadaka, and claim the throne as his. Killmonger then challenges T’Challa to the ritual combat. He defeats T’Challa and hurls him over a waterfall, and then kills Zuri. Killmonger then eats the heart-shaped herb, and orders the rest of them to be burned. However, that sly Nakia steals one first. Killmonger, W’Kabi, and his army prepare to ship Wakandan weapons to their operatives around the world.

Nakia, Shuri, Ramonda, and Ross are forced to flee to the Jabari for help. There, they find T’Challa in a coma after the Jabari rescued him in thanks for sparing M’Baku’s life. Nakia’s stolen herb heals him, and T’Challa returns to fight Killmonger. W’Kabi and his army take on Shuri, Nakia, and the Dora Milaje as Ross remotely pilots a jet. It shoots down the planes carrying the vibranium weapons.

When M’Baku and the Jabari arrive with reinforcements for T’Challa, W’Kabi and his army must surrender to Okoye. The fight heads to Wakanda’s vibranium mine where T’Challa stabs Killmonger. Killmonger refuses to be healed. Instead, he wants to die a free man rather than be jailed.

With the threat over, T’Challa establishes an outreach center at the building where N’Jobu died which Nakia and Shuri will run.

In a mid-credits scene, T’Challa travels to the Vienna International Centre with Nakia, Okoye and Ayo. There, he speaks before the United Nations to open Wakanda’s borders, and utilize its resources to help the world.

In a post-credits scene, Shuri visits Bucky Barnes who has woken from his cryostasis, and she tells him he has much to learn.