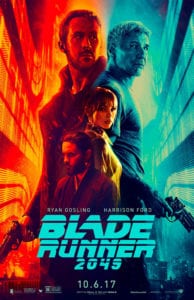 Warner Bros., Denis Villeneuve, and Ridley Scott bring us Blade Runner 2049; the sequel to one of the best science fiction films of the last 35 years. Harrison Ford is back as Rick Deckard, and along for the ride is the heart breaker himself, Ryan Gosling; the Princess Bride, Robin Wright; and a very robotic, Jared Leto.

The original Blade Runner (1982) is well known for being a box office flop at the time as well as having many different versions—Ridley Scott’s Final-Cut being considered the best. While 2049 probably won’t have multiple edits floating around, it looks like this sequel will be a box office flop as well, and frankly, that’s not a shocker or big deal. 2049 should be seen more as an investment because, in all likelihood, this film too will have a cult following. That will allow it, in the long run, to eventually remake its money (and more), which is always a smart move on any studio’s part.

The advertising leading up to 2049’s release has been very cryptic, so younger viewers in the 18-34 age demographic might not have a clue about the Blade Runner dystopia that many of us have come to know and love. I’ve met a plethora of people scrambling to watch the first one for the first time before they see the sequel.

2049 is a long film—163 minutes long, and the story is a slow burn. If you’re expecting all of the humor and action of a Marvel film, then Blade Runner 2049 isn’t for you. While the original film is a beautiful film-noir detective story with one of the greatest soundtracks ever, 2049 stands on its own without stepping on the legacy it’s lovingly built on. Gone is the charm of its predecessor’s noir overtones, but 2049 makes up for it with a gripping dystopian beauty that reminds me more of the world I created in my head when I read “Do Androids Dream of Electric Sheep?”

Much of the film is spent with ‘K’ looking for Deckard and Rachel’s child before the world discovers it’s possible for replicants to procreate. If the word gets out that replicants really are more human than human, there will be a cataclysmic war, and it won’t be good for humanity.

Enter Niander Wallace, the man who bought the bankrupt Tyrell Corporation. He will do anything to get a hold of Deckard and ultimately his robotic love child. Reverse engineering a replicant that can reproduce would mean a lifetime supply of slaves for his company.

Blade Runner 2049 has many amazing performances in it. Robin Wright’s Lieutenant Joshi is tough as nails, and you never really know whose side she’s on. Jared Leto’s Niander Wallace is a man guided by his God complex, but it has left him with little humanity. He’s so robotic in his mannerisms, you’d think he’s a replicant as well…a nice touch as Eldon Tyrell in the original Blade Runner was initially going to be a replicant. Read the full summary…

Finally, Harrison Ford is back, and his screen time is limited. In fact, I thought they were going to go all “Luke Skywalker in The Force Awakens” on us, and just use him in the last few minutes of the film. I think it was the right amount of time as Ford’s age and limited mobility is really showing at this stage of his career. It makes me nervous for the next Indiana Jones installment where he’s playing the titular character once again.

Let’s be real. Blade Runner 2049 is not for everybody, and its performance at the box office clearly indicates that, but Ridley Scott, Denis Villeneuve, and cinematographer Roger Deakins have given the Blade Runner faithful a sequel to be proud of. All the beauty and intrigue of the original is lovingly recreated, and maybe most importantly, after watching this film, you still won’t be sure if Rick Deckard is a human or a replicant.

Agent 'K' discovers long-buried secrets which leads him to track down former blade runner Rick Deckard, who's been missing for thirty years.