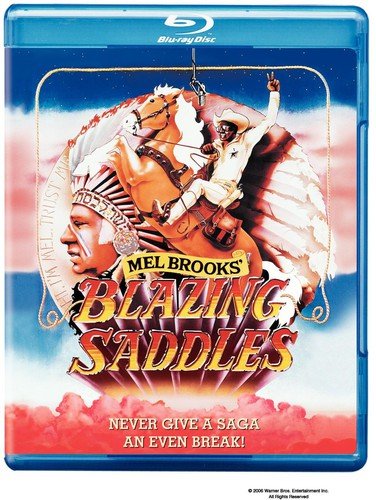 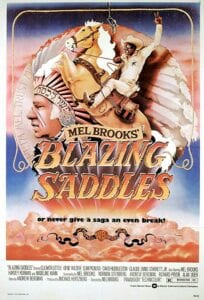 Blazing Saddles takes place in 1874 somewhere in the Old American West. After construction on a new railroad runs into quicksand, the route needs to change. However, the new route will run straight through the frontier town of Rock Ridge.

In town, we find everyone has the same last name of Johnson. There’s a Howard Johnson, a Dr. Samuel Johnson, a Van Johnson, an Olson N. Johnson, and even a Gabby Johnson to honor the late Gabby Hayes.

The sniveling State Attorney General, Hedley Lamarr, plans to drive out the townsfolk in order to buy their land along the new railroad route on the cheap. To do so, he sends his bumbling lackey Taggart out with a gang of men to scare them away. This incites the humble people of Rock Ridge to petition the Governor, William J. Le Petomane, to appoint a new sheriff, pronto!

However, Le Petomane is as dumb as the day is long. Lamarr cons the governor into selecting a black railroad worker named Bart who is about to be hanged. Bart’s given a reprieve from death after an unfair conviction for hitting Taggart in the head with a shovel after Taggart saved the railroad’s handcar instead of him and another black man.

Lamarr hopes that a black lawman will offend the townspeople so much that they will either abandon Rock Ridge or lynch the new sheriff. Either way he wins.

Fortunately, Bart is a quick-witted man. After befriending the drunken gunslinger named Jim (also known as The Waco Kid) in his jail cell, Bart works to win over the townsfolk. Taggart has Mongo, a terribly strong, but slow-thinking goon take out Jim. However, Jim gets the better of him via a Candygram. Next up, Lamarr sends the German seductress-for-hire, Lili von Shtupp, to shtupp him. However, Jim beats her at her own game after she sucks on his arm.

Bart’s now forced to come up with a brilliant plan to save the town in less than 24 hours. He assembles the white townsfolk and black railroad workers 3 miles east of Rock Ridge to build a fake town as a diversion. The group labors all night to build that replica.

As the sun rises on the faux town, Bart realizes it needs people in it to fool Lamarr’s gang. Bart has the townspeople make exact replicas of themselves before leaving with Jim and Mongo to slow the invaders down.

The three men quickly build a tollbooth, and label it Le Petomane Thruway, thus requiring Taggart’s men to each pay 10¢ to pass on their horses. Of course, none of the marauders has any change, so Taggart sends one of them back to town to get a shitload of dimes.

Eventually, they all make it through the tollbooth, and the gang attacks the fake town populated with dummies. Additionally, Bart boobytrapped the place with several dynamite bombs. Unfortunately, when Bart tries setting off the bombs, the detonator doesn’t work. Jim, being the best shot of the group, fires his pistol at them. The bombs go boom, and the gang flies through the air. The citizens of the real town take this opportunity to launch their counterattack.

As the fight between the townsfolk and Lamarr’s men devolves, they literally break the fourth wall. The fight spills out from the Warner Brothers lot into a Buddy Bizarre’s neighboring musical. They then roll into the studio commissary for a big pie fight before Mongo knocks out Taggart with a smash of his head on a cash register.

The fight finally pours out into the surrounding streets as the citizens of Rock Ridge chase the villains back to town. Lamarr, however, exits stage left, and takes a taxi off the picture. He arrives at Grauman’s Chinese Theatre to watch the premiere of Blazing Saddles. However, he sees on the big screen that Bart has arrived outside the theatre too. Bart shoots Lamarr in the groin, killing him and his two little boys. Bart and Jim then go inside the theater to see how the film ends.

It ends with Bart leaving Rock Ridge…for his work there is done. He now intends to fight injustice in other parts of the world, wherever they may be. The townsfolk call bullshit on that statement, and Bart just says it’s getting dull around there.

As he rides out of town, he meets up Jim, still carrying the popcorn he bought at the theater. The two partners decide to go off to nowhere special before turning in their horses for a ride off into the sunset in a swanky limousine.