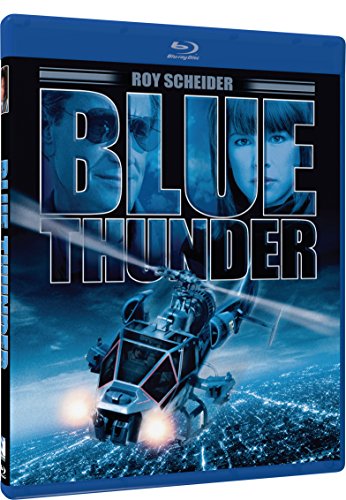 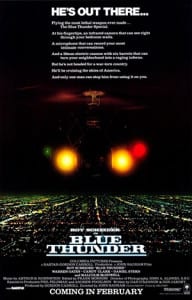 In 1983’s Blue Thunder, Frank Murphy is the Rambo of helicopter pilots. He is a troubled Los Angeles Police Department officer haunted by experiences in the Vietnam War, and nobody really wants to fly with him. In today’s world we would diagnose him as having Post Traumatic Stress Disorder, but in 1983, we would just say that he is fucked up, and needs some quality time alone in the forrest with a machine gun.

Murphy and JAFO get sideways with the department and get suspended when they are off playing peeping Tom on a female Cirque De Soleil performer while a member of the city council is attacked and murdered nearby. Flexibility trumps politicians. That’s the better way to get screwed.

Murphy is soon pulled off suspension, and selected to pilot the world’s most advanced helicopter, nicknamed “Blue Thunder” because that’s what you do to employees that are showing signs of mental instability. “Blue Thunder” is a military-style combat helicopter intended for police use in surveillance, and against possible large-scale civic disobedience during the forthcoming Olympic games.

Remember this is 1983. At that time, the worst thing the writers could think of was some pissed off and dejected French gymnastics fans getting rowdy in West Hollywood after losing to Mary Lou Retton. Rodney King was still about a decade away.

“Blue Thunder” was built with stealth technology that allows it to fly virtually undetected, much like Daniel Stern’s career now. Additionally, the helicopter has built in infrared scanners, powerful microphones and cameras, and such high tech shit such as a VCR. Even “Blue Thunder” knew BetaMax was a bust.

Most impressively though, “Blue Thunder” has a mini cannon strapped on its front which can take out the entire cast of the film Colors if they get out of line. At the military’s demonstration of the helicopter, Murphy is told that the cannon aims wherever the pilot is looking. Apparently, the pilot for the demonstration is Ray Charles, because the helicopter takes out dozens of innocent white “civilian” figures while it is in the process of taking out the red “bad guy” figures.

However, the pilot for the demonstration isn’t the rhythm and blues genius, but is in fact a Droog who is big fan of Ludwig Van. The pilot is Murphy’s old commanding officer from Vietnam, United States Army Colonel F.E. Cochrane, played by Malcolm McDowell. He is the primary test pilot for “Blue Thunder”, and he hates Murphy, which makes even more sense that crazy Murph would get to pilot old “Blue.” Cochrane even attempts to kill Murphy and JAFO by sabotaging their helicopter during a test flight, but the duo survive relatively unharmed.

Murphy begins to suspect that something is up, and begins investigating the death of the city councilwoman on his own, believing it to be more than just a random murder. His feminine intuition tells him Cochrane must somehow be involved, so he and JAFO use “Blue Thunder” to record a meeting between Cochrane and other government officials which reveals that they are working with a subversive group that is intending to use the heavily armed helicopter in a military role to quell disorder under the project codename THOR.

Furthermore, the high flying duo discover that the group has been secretly eliminating political opponents to advance their agenda, and that Murphy and JAFO just got added to the list. Unfortunately, Cochrane looks out the window and sees the silent helicopter hovering and knows that Murphy knows what is going on.

Murphy and JAFO race back to police headquarters to inform their Captain, but unfortunately, the secret cabal is one step ahead of them and has one of their minions at the station.

Despite that, JAFO is able to secure the video tape recording, and hides it in a dumpster at the local drive in movie theater…probably the safest place to hide something on Earth as everyone goes to the drive-in in 1983 and ever fewer are paying attention to the movie screen.

Unfortunately, JAFO is captured upon returning to his home and interrogated S&M style. He is able to get away by talking sexy to his captors, but ultimately, the officer is undone by the same bicycle that he relied on in Breaking Away. He trips over Moocher on his bike, and is run down by Varek from Buck Rogers. Murphy finds JAFO’s body being collected by police and hears over the radio that he is wanted for questioning.

Murphy finds a Wonder Years style recording from JAFO that fawns all over Winnie, but does tell Murphy where the tape is. Murphy steals “Blue Thunder” and enlists his crazy girlfriend Kate to get the tape and take it to the local news. Murphy directs her and protects her from the air, while she demolition derbies it up on the road.

While Murphy is assisting his girlfriend get to the news station, the evil cabal is able to convince the mayor to let two Air National Guard F-16 fighters attempt to shoot Murphy out of the sky, which results in free chicken for everyone in Chinatown, and a big hole in a skyscraper in downtown Los Angeles.

The fighters are eventually called off, but Cochrane disobeys orders, and attempts to take down Murphy with another high powered helicopter. During the battle, Murphy is able to perform a 360° loop through use of “Blue Thunder’s” turbine boost function (and a terrible scale-model) to come in burning from behind (just the way Malcolm likes it) and “blow” him away with a little blue of his own.

Murphy then takes matters into his own hands, and destroys “Blue Thunder” by landing it in front of an approaching freight train . He miraculously escapes the explosion by timing the landing with his magic sanity stop watch that enables him to casually leap out at the last second about 50 feet from the explosion.