Fourteen after the events of the first Borat film, Borat finds himself working in a gulag for the dishonor that he brought to Kazakhstan with the release of his first movie. Borat is summoned to his country’s premier who tasks the former reporter with a mission – to deliver a monkey to the United States President Donald Trump in the hopes that it will curry favor. Borat travels to the United States with his fifteen-year-old daughter where he learns more about the American culture, the COVID-19 pandemic, and the political elections. 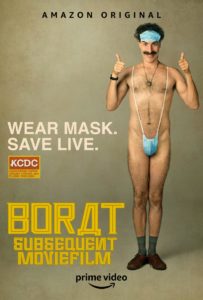 Fourteen years after the events of the first Borat film, Borat Sagdiyev (Sacha Baron Cohen) works in gulag for dishonor that he brought to Kazakhstan with the release of his first movie. Borat is released and brought before his country’s premier, Nursultan Nazarbayev (Dani Popescu), who orders Borat to conduct a mission for his country. Borat is tasked with delivering Kazakh Minister of Culture (and Kazakhstan’s most famous porn actor) Johnny the Monkey to United States President Donald Trump to curry favor and redeem the reputation of Kazakhstan. Borat realizes that he will not be able to get close to President Trump after he defecated in the landscaping of Trump International Hotel in the previous film. Borat decides to give the monkey to Vice President Mike Pence instead. Borat visits his family before leaving for America again, but finds that his arch nemesis neighbor, Nursultan Tulyakbay (Miroslav Tolj), has taken his family and home. He also learns that he has a fifteen-year-old daughter, Tutar (Maria Bakalova), who lives in his barn.

Borat is transported in a cargo ship, taking a route that has him stop all around the world. Ultimately, he arrives in the United States in Galveston, Texas. Once there, he discovers that he is a celebrity and that he cannot move freely around due to everyone recognizing him from the previous film. Borat purchases multiple disguises from a costume store so that he can maintain a low profile. He buys a cell phone and purchases a horse trailer for Johnny before heading to pick up Johnny’s crate in customs. Once at customs, he finds that Tutar has stowed away in Johnny’s crate and eaten Johnny while they were being transported. Borat faxes Nazarbayev, who tells him to find a way to satisfy Pence or he will be executed. Borat decides to give his daughter to Pence.

Since I did not have money to buy a gun, I went to the nearest synagogue to wait for the next mass shooting. Borat Sagdiyev

Borat takes Tutar to get a makeover, which includes getting new clothes. Borat takes her to a debutante ball where her menstrual blood is displayed during a graphic father and daughter dance. The next day, Borat discovers that Pence is scheduled to speak nearby at the CPAC convention. Borat disguises himself as President Trump in order to get near Pence. As the Vice-President is speaking, he breaks into the convention hall with Tutar on his shoulder and tries to give her to Pence. However, he is thrown out by security. When Borat notifies Nazarbayev, the Premier is enraged and orders Borat to return to Kazakhstan for execution. Not wanting to die, Borat comes up with another plan to give Tutar to someone close to Trump and settles on Rudy Giuliani.

Borat and Tutar visit a plastic surgeon after hearing Giuliani brag about having an affair with large-breasted women. The surgeon recommends cosmetic surgery, but Borat must raise enough money for Tutar to get the implants. Borat leaves Tutar with a babysitter while he goes to work at a nearby barbershop. The babysitter (Jeanise Jones) is confused by Borat’s sexist teachings and teaches Tutar that the things that she learned in her culture are lies. After Tutar sees women driving cars and successfully masturbates for the first time, Tutar decides not to get the cosmetic surgery. When Borat returns, Tutar yells at her father for oppressing her for her whole life. Before leaving, Tutar tells Borat that the Holocaust is a lie by citing to information from a Holocaust denial Facebook page. The Holocaust is Kazakhstan’s most honored historical contribution.

Borat is disturbed by his daughter’s behavior and the information concerning the Holocaust. He decides to commit suicide by going to the nearest synagogue dressed as his version of a Jew with the hopes of being killed in the next mass shooting. He encounters Holocaust survivors who treat him with kindness despite his anti-Semitic views. Overjoyed that the Holocaust did occur, Borat decides to search for Tutar. However, he finds that the streets are deserted due to the COVID-19 pandemic and quarantines with two QAnon conspiracy theorists. The two men help Borat to find Tutar online. Borat discovers that his daughter has become a reporter and will be covering a March for Our Rights rally in Olympia, Washington. The three men travel to the rally to find Tutar.

At the rally, the two men appeal to Tutar to help her father as Borat sings an offensive country song to the crowd. They tell her that her dad will be executed unless she helps him. Tutar agrees to help Borat and arranges an interview with Giuliani and plans to seduce him. Borat is not involved in the plan. After Borat returns to the babysitter to retrieve his ball and chain, he suddenly has a change of heart and realizes that he loves his daughter. He decides that he does not want to give her away to Giuliani. He interrupts the interview before Tutar can seduce Giuliani. Father and daughter reunite and express their love for each other. Borat decides to face execution in Kazakhstan and Tutar promises to go with him.

Once in Kazakhstan, Borat is shocked to learn that he will not be executed. He learns that Nazarbayev used him to spread the COVID-19 virus around the world. Borat records the Premier’s admission to being the cause of the virus and sends it to Brian in the United States, the man who sold him the phone earlier. Borat and Tutar blackmail Nazarbayev into giving him his job back and changing Kazakhstan’s misogynistic laws. Three months later, Tutar and Borat become a reporting team together. Kazakhstan replaces the country’s antisemitic activities with new ones, such as the Running of the Americans. In the new tradition, a caricature of Trump supporters pretend to spread COVID-19 while simultaneously killing an effigy of Anthony Fauci.