In the film closely based on the classic novel by Bran Stoker, the young barrister Jonathan Harker travels to Transylvania to meet his new, mysterious client Count Vlad Dracula. Once there, Harker is imprisoned by the Count who seeks to seduce Harker’s fiancé, Mina Murray, a woman who the Count believes is the reincarnated form of Dracula’s long dead wife, Elisabeta. However, Harker eventually escapes and joins forces with infamous vampire slayer, Dr. Abraham Van Helsing to stop Dracula from his evil plan. But once Mina begins to recall the memories of her past life, will her love for Harker be enough to keep her from becoming Dracula’s vampire bride? 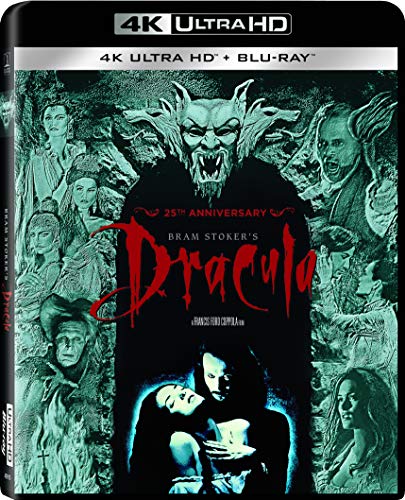 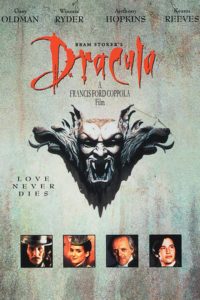 The year is 1462. Transylvanian nobleman Vlad Dracula (Gary Oldman) returns from war after defeating the Turks only to find that his beloved wife Elisabeta (Winona Ryder) has committed suicide after his enemies falsely report Dracula’s death to her. A Transylvanian priest (Anthony Hopkins) tells his lord that Elisabeta’s soul is damned to Hell forever for committing suicide. In response, Dracula renounces God and destroys the chapel. Dracula declares that he will rise from the grave to avenge his lost wife with all the powers of darkness. Dracula proceeds to stab the chapel’s stone cross with his sword and drinks the blood that pours out of the desecrated cross.

While interacting with Dracula, the aged Count sees a picture of Harker’s fiancé, Mina Murray (Winona Ryder), and concludes that she is the reincarnated form of Elisabeta. Dracula imprisons Harker within his castle and allows his vampire brides (Monica Bellucci, Michaela Bercu, and Florina Kendrick) to feed upon him to keep him weak. Dracula sails to England in boxes filled with Transylvania soil and takes up residence at his recently purchased Carfax Abbey estate.

While in London, Dracula takes different appearances, including that of a much younger man and a wolf like creature. When he is in wolf form, Dracula bites Lucy Westenra (Sadie Frost), a friend that Nina is living with while Harker is away in Transylvania. Lucy falls ill from the bite, and a couple of her gentlemen suitors, outdoorsman Quincey Morris (Billy Campbell), fiancé Arthur Holmwood (Cary Elwes), and Dr. Seward, seek out the assistance of Dr. Seward’s former mentor Dr. Abraham Van Helsing (Anthony Hopkins) to help treat Lucy. Van Helsing immediately recognizes that Lucy is the victim of a vampire and warns the men about the dark forces that they will need to take on.

They say you are a man of good… taste. Dracula (Gary Oldman)

At the same time, Dracula attempts to woo Mina. Appearing as a much younger man, Dracula begins to have some sway over Mina, who still longs for the missing Harker. Meanwhile, Harker escapes from Dracula’s castle and begins to make his way back towards London while still recovering from his ordeal in Transylvania. Upon receiving word from Harker, Mina leaves London and meets Harker in Romania where the couple immediately marry.

Back in London, a heartbroken Dracula completes the transformation of Lucy into a full vampire. Van Helsing leads the gaggle of Lucy suitors to stop the now undead Lucy from feeding on a young girl. Ultimately, they are forced to kill Lucy.

Shortly thereafter, Harker and Mina return to London. Harker leads Van Helsing and the others to Carfax Abbey in an attempt to find and kill Dracula, whom they now know is the vampire they have been seeking. They destroy the Count’s boxes of soil so that Dracula will not have a place to return to. Meanwhile, Dracula enters the insane asylum and kills Renfield after he believes that the deranged man somehow warned Mina of his presence. Dracula then visits a sleeping Mina in Dr. Seward’s quarters in the insane asylum. Dracula confesses to transforming Lucy into a vampire. However, Mina is confused and angry as she begins to remember portions of Elisabeta’s previous life. Mina requests that Dracula transform her into a vampire, which he does.

However, Van Helsing and the others enter the chambers during the transformation. Dracula claims Mina as his bride, but he is forced to flee from the men leaving Mina behind. The transforming Mina is placed under hypnosis by Van Helsing who learns via her connection with Dracula that he is sailing home to Transylvania in his last remaining box of soil. The men and Mina all journey to Varna to intercept Dracula on his voyage home. However, the Count evades the hunting party via his connection with Mina’s mind. The men decide to split up, with Van Helsing and Mina traveling to Dracula’s castle while the rest of the men, including Harker, try to stop the band of gypsies who are transporting Dracula across the land.

At night, Van Helsing and Mina are approached by Dracula’s brides. Overcome with her transformation, Mina attempts to seduce the elder Van Helsing. However, Van Helsing avoids becoming a victim by placing a communion wafer on Mina’s forehead, leaving a burn mark and restoring her temporarily to her senses. Van Helsing protects the two of them from Dracula’s brides and ultimately decapitates them the next morning while they sleep.

Not long after, Dracula’s caravan of protective gypsies arrives at the castle with their master in his coffin. They are pursued closely by Harker and his companions. The parties engage in a battle outside the castle just before sunset. Morris is stabbed in the back. Once the sun sets, Dracula bursts from his coffin. Harker slits Dracula’s throat with a knife while the dying Morris stabs the Count in the heart. As Dracula begins to fall, Mina rushes to his defense. Van Helsing and Harker allow her to take the dying Count back into the castle.

Once inside the ancient desecrated chapel, Dracula retakes his ancient demonic form as he lies dying. He and Mina share a kiss as the candles in the chapel light up and the cross repairs itself. Dracula suddenly reverts to his younger self and begs for Mina to give him peace. Mina takes a knife and stabs Dracula in the heart. As the vampire dies, the mark on Mina’s forehead from the communion wafer disappears implying that she has been returned to human form. Mina then decapitates the deceased Dracula and then stares up at a fresco of Dracula and Elisabeta ascending to Heaven together.