Bud and Lou enlist in the army in order to escape being hauled off to jail. The stunt works, but they quickly soon find themselves in basic training. To their dismay, the company’s drill instructor is none other than the cop who was all set to run them off to the hoosegow in the first place! The boys do their best to get under the skin of their humorless superior. 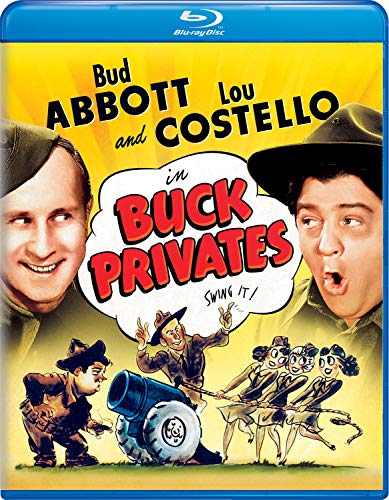 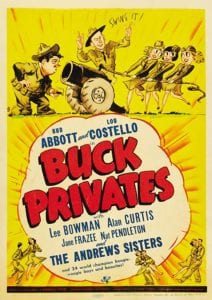 Abbott and Costello play Slicker Smith and Herbie Brown, the two lead/non-lead characters of Buck Privates. Slicker and Herbie are conmen who sell neckties out of a suitcase, which is apparently illegal in New York in the 1940’s. While trying to get away from a cop, they duck into a movie theater and inadvertently sign up for the army.

At the same time, spoiled playboy Randolph Parker, played by Lee Bowman, arrives at the recruitment center looking to get out of his draft obligation. But his wealth and influential father don’t get him out of his patriotic duty. Conveniently, Randolph’s valet, Bob Martin, played by Alan Curtis, has also been drafted as well. Unfortunately for Randolph, Bob hates him and has little respect for the wealthy tomcat. Bob and Randolph soon begin competing before they even get to boot camp when they meet the beautiful camp hostess Judy Gray, played Jane Frazee.

Once at boot camp, Slicker and Herbie are dismayed to learn that the cop who chased them while they sold the contraband ties is now their drill instructor. He is constantly coming down hard on the two conmen, but he especially has it in for Herbie, who finds himself doing KP on more than one occasion.

Meanwhile, Randolph continues to win the hearts and minds of his fellow recruits. He skips an army shooting match in order to meet with Judy. Randolph’s company loses money after betting on him to win the competition due to him being a crack shot. The company holds it against Randolph, but more importantly, Judy thinks less of him. However, Randolph has the opportunity to redeem himself during a war game exercise, Randolph saves Bob and sacrifices himself in order for the company to win the war game exercise.

He is finally accepted by his unit, and wins Bob’s and Judy’s admiration in the process. As a reward for his growth, Randolph learns that he’s been accepted to Officer Training School. He initially refuses, believing that his father has pulled some strings for him. However, his father clears up the confusion by telling his son that he earned it on his own and that he is proud of him.

Randolph later finds out that both Bob and Judy will be joining him at the Officer Training School. Meanwhile, Slicker and Herbie try to con their drill sergeant out of his winnings from the war games and Herbie ends up losing his bank role, and his pants. The army was so much fun before Pearl Harbor.